August 24— As Delta surges, both the vaccinated and unvaccinated roll back their out of home behavior. At the same time, many Americans support their employers requiring COVID-19 vaccines for their workers. Even with the resurgence of the pandemic, Americans are still planning on spending more than last year this holiday season. Plus, we get into what it means to be an adult, views on student loan forgiveness, and how people’s relationship to personal hygiene has changed.

Out of home behavior tapers as Delta surges

Over the past two months, Delta caseloads surged, dampening some of the strong consumer behavior that permeated the early summer and spring. To find out more about how Delta is changing American behavior and attitudes, join us this afternoon and ask us anything! 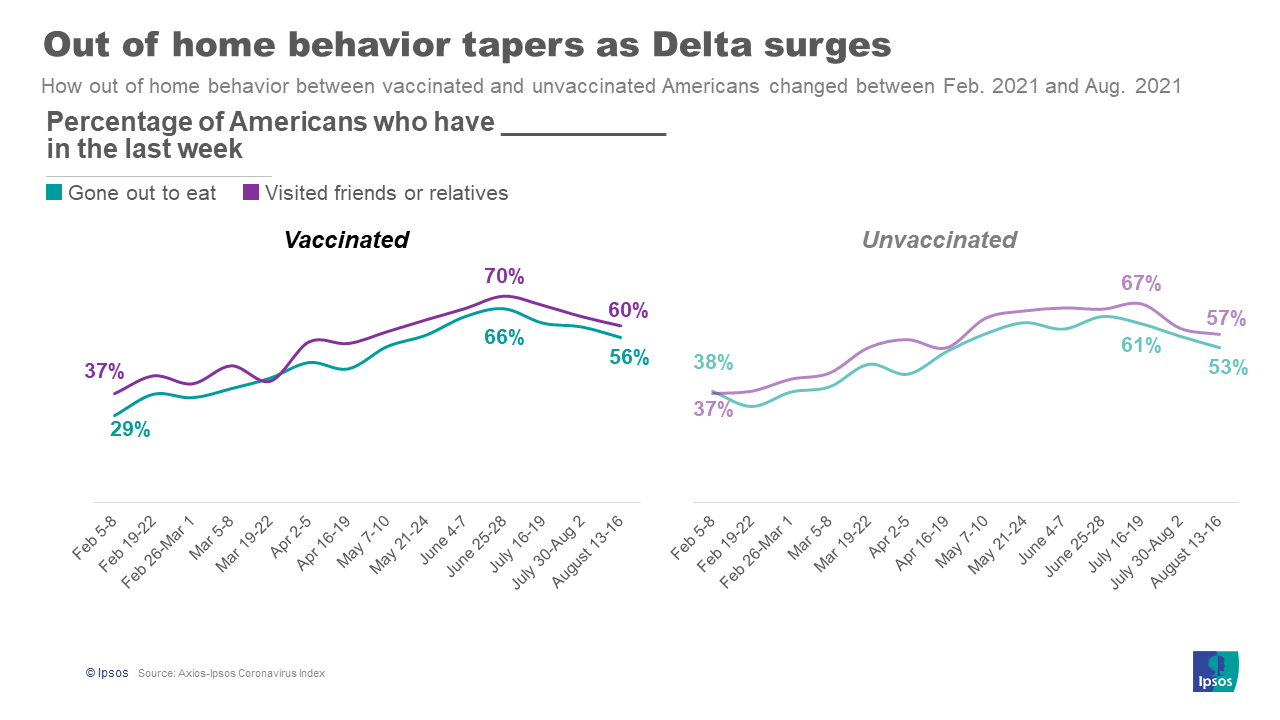 Slightly more than half of working Americans support their employers requiring that all workers be vaccinated against COVID-19, Axios/Ipsos polling finds.

Older working people, those with a Bachelor’s degree or more, Democrats, urban employees, people who aren’t parents, and employed people who aren’t white are all more likely to support their employer mandating workers receive the COVID-19 vaccine.

Notably, these groups are also more likely to already be vaccinated against COVID-19.

Writ large, Americans’ views on the importance of personal hygiene have not changed too much from 2018. Yet views on certain elements of hygiene and personal cleanliness that have been put forward as a means of preventing the spread of COVID-19 have changed, albeit primarily among women.

Women are now more likely to say that washing their hands after returning home and sanitizing their mobile devices are important, relative to 2018. Among men, opinion has not shifted in a statistically meaningful way.

After a turbulent, long year, some Americans are looking to spend more this holiday season than they were last year.

One in three Americans is planning on spending more for the holidays, up 7-points from last year. Last year men, younger adults, people in the South and Northeast, and those in cities were more likely to say they were planning on spending more than they did during the pre-pandemic holiday season. This year those same groups are even more likely to plan on outspending the shopping they did in 2020, superseding their excitement last year.

However, as Delta surges, consumer confidence and behavior have muddied ahead of the all-important holiday season, which cushions many retailers’ bottom line.

Over the past five years, what constitutes adulthood for Americans has changed

Over the past five years, what adulthood looks like has changed for many Americans.

Fewer Americans in 2021 say doing things like paying your own bills, having a full-time job, not needing regular financial assistance from your family, living outside of your parents' home, and contributing to a 401k are necessary to be considered an adult.

Before the pandemic, what constituted adulthood was in flux as various traditional measures of being an adult, like homeownership and job stability, were no longer accessible to many younger Americans. Now, following the pandemic, that definition of adulthood seems to be in flux yet again.

Just one in ten Americans think four-year colleges and universities are affordable and over half (55%) support the forgiveness of all federal student loan debt. This should come as no surprise, considering that around 45 million Americans have collectively taken out $1.7 trillion in federal and private student loans to fund their post-secondary education.

Americans who are opposed to the idea of erasing all federal loans show more openness towards these policies as well, with one in five agreeing that public sector and health care workers’ loans should be forgiven.