In our last dispatch, we talked about the shift from the pandemic into the endemic phase where this is just how things are from now on. We see more evidence of that, not just in our tracker but in the Ipsos-Forbes Advisor U.S. Consumer Confidence Tracker. Many of the trending questions are unchanged since previous waves. That said, we wanted to cover two key topics with a fresh approach. So read on for some new looks at inflation and hybrid work.

Read on for data about: Inflation, hybrid work and back-to-school shopping.

What do we value at home – and how is inflation affecting it?

Why we asked: As mentioned, we wanted to approach inflation and hybrid work from a new perspective. So we asked a pair of questions. One question focused on the things you value, because we know that values don’t tend to shift very much. Once we benchmarked that, we asked a follow-up about how much inflation is impacting those things.

What we found: Each of the things we asked about was important to most Americans, although the ability to dine out regularly was somewhat less so. There was, however, significant variation in the degree to which things were important. More than nine out of ten said that “feeling financially secure” and “being able to pay bills” and “being able to save each month” were important, but seven in 10 said security and bill paying were very important, as opposed to only 54% saying that monthly savings were very important.

And inflation is having the biggest impact on the things people value most. More than six in ten say that it’s making it harder for them to feel financially secure or to be able to save each month. While many said that there was no impact, the “harder” outnumbered the easier by seven or eight to one in most cases. 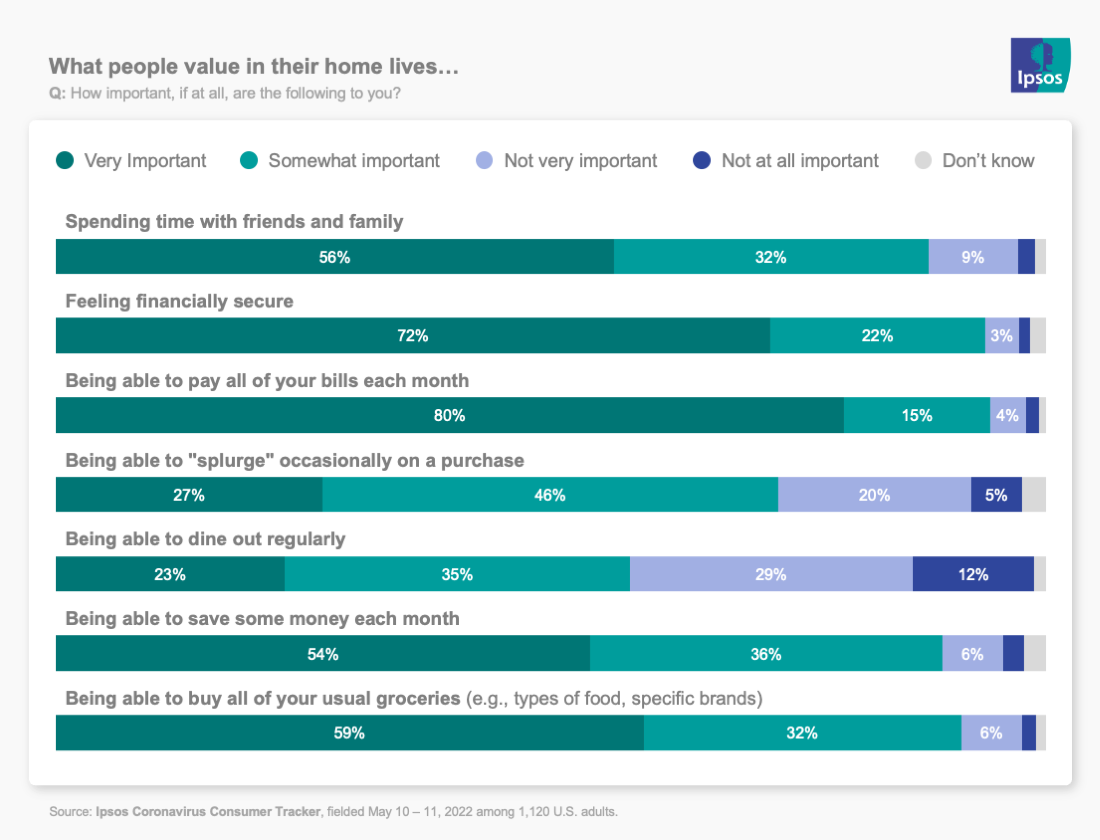 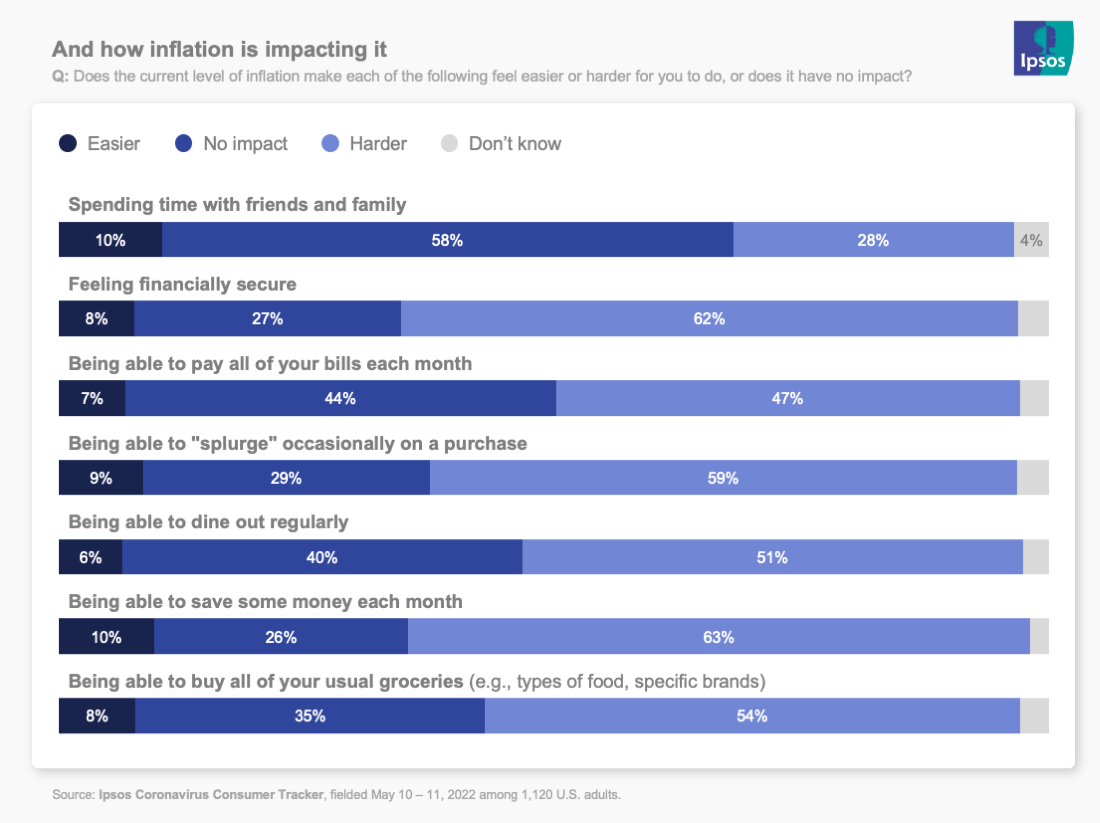 What do we value at work?

Why we asked: Similarly, we asked a pair of questions about hybrid work. The first was about the things we value at work. Some choices were about the things that help us stay engaged in our jobs, like a path to promotion and collaboration. Some were more practical, like financial security, flexibility and financial stability

What we found: Financial issues and work/life balance topped the list of priorities, especially for those who listed them as “very important.” Flexibility in when and where you work was slightly less important, likely reflecting that for many jobs those aren’t necessarily even issues on the table. The employee engagement options were least, but still quite important. 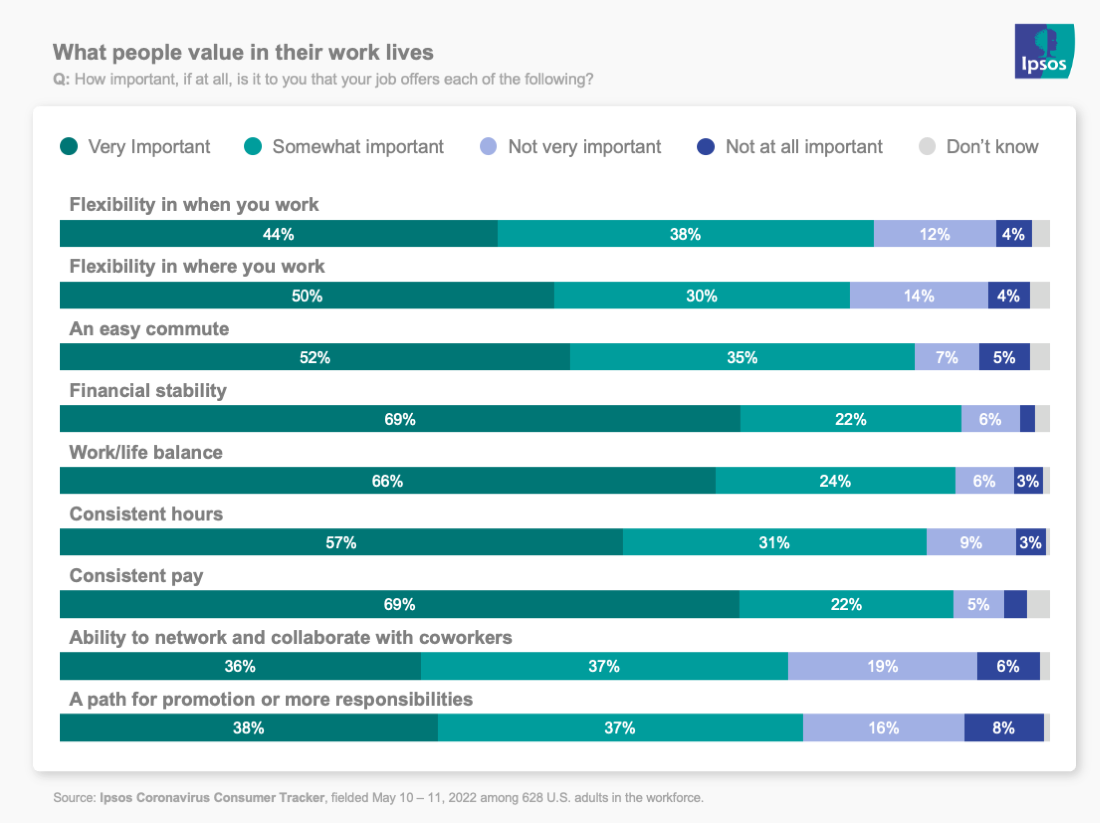 What kind of scenario enables what we value at work?

Why we asked: Knowing what people value, we wanted to see which working situation they felt would allow them to achieve those goals and values.

What we found: Overall, working on-site was the most popular choice for most things. Working at home five days a week was seen as the least likely option to enable any of our values except an easy commute. Working at an office five days was seen as the best choice for those looking for consistency of hours, pay and financial stability. But hybrid work was a strong second, especially on issues of flexibility. Again, keeping in mind that hybrid isn’t an option for many workers, this data continues the case for avoiding a one-return-to-office-plan-for-all approach. If employers mandate one solution for everyone, they are likely to alienate some part of their workforce (see the previous wave’s data on the number of folks thinking of quitting.) 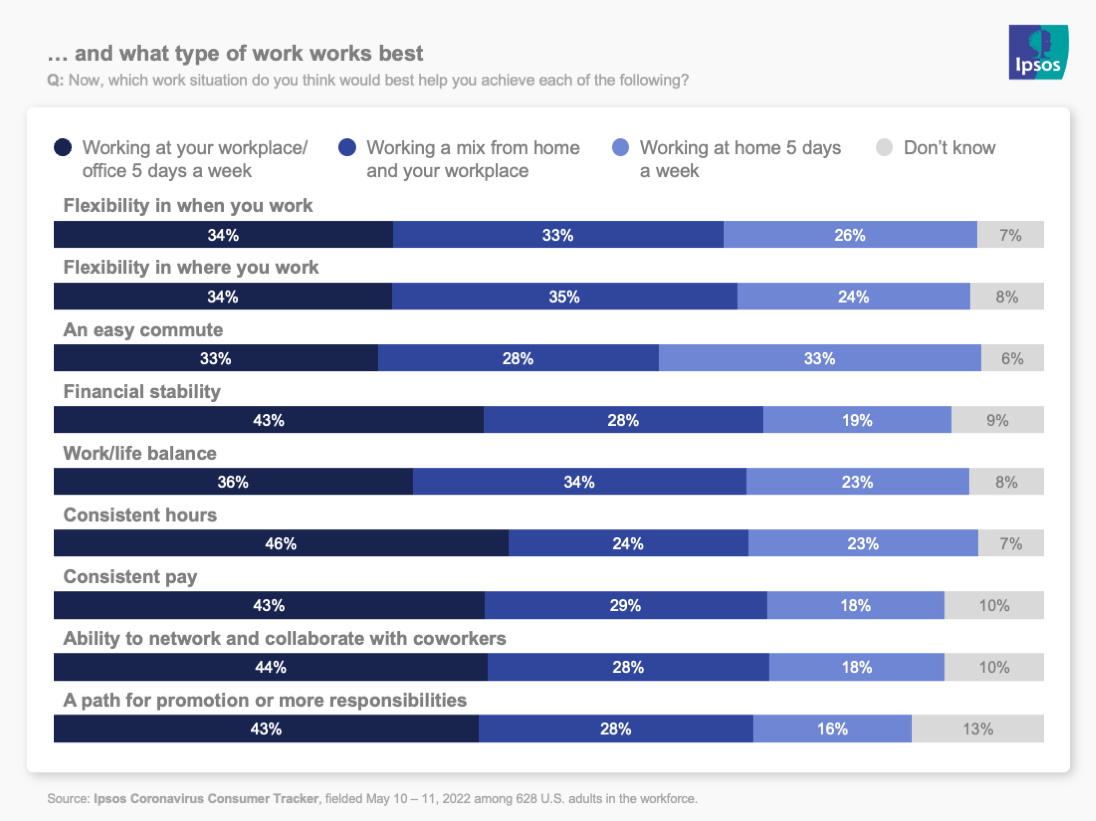 We are not ready for back to school

Why we asked: We know it’s important for brands to be thinking about back-to-school shopping in terms of stock, inventory, merchandising and marketing.

What we found: At this point, parents aren’t ready to think about next year’s school as we focus on wrapping this one up and getting the kiddos to the finish line of another weird school year. While some will surely buy the ready-made pre-order supply box offered by their school districts, less than 5% say they’ve started shopping for next year already and only another handful think they will start in May. One in four plan to start in July, and a plurality (32%) will start in August. 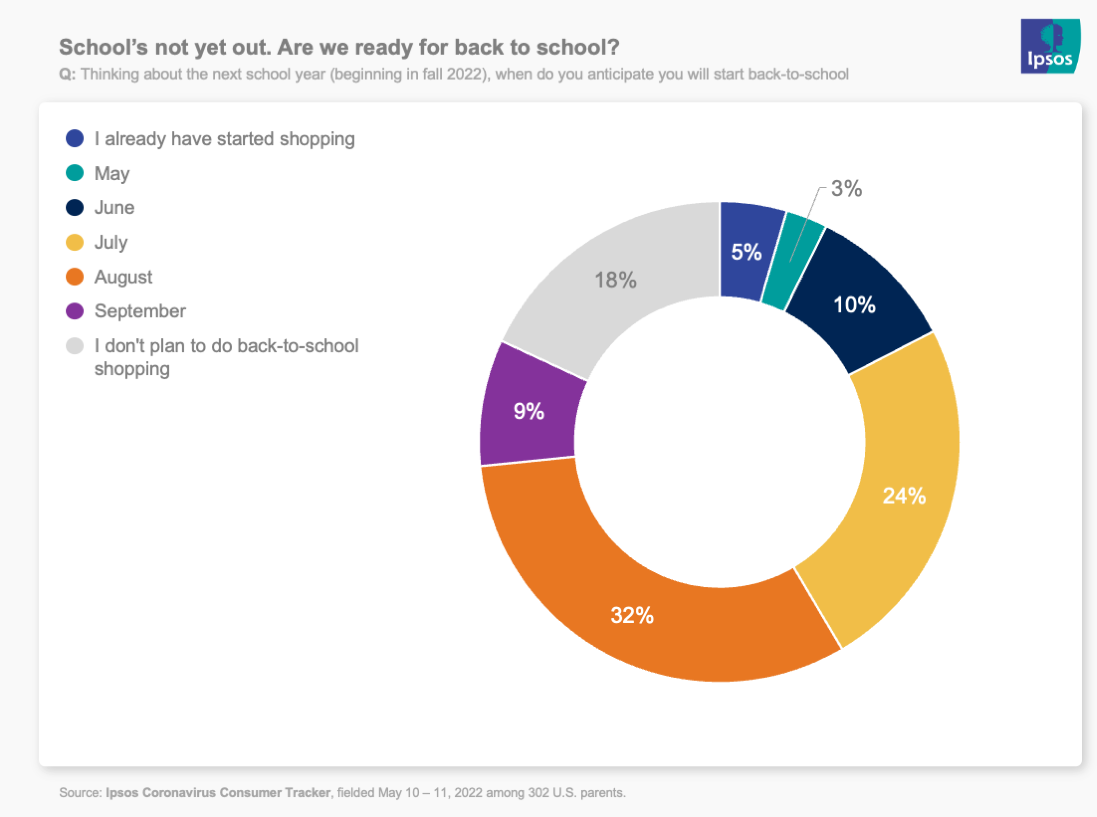 America is sticking to streaming

Why we asked: Our continuing quest to understand what pandemic-era attitudes and behaviors will stick.

What we found: In the first question, we asked if people had signed up for a number of popular subscription services in the past year – from streaming media brands, to grocery delivery, podcasts and print media. New subscribers and anticipated re-up rates in the last year are more or less consistent with when we asked roughly a year ago.

•       Another consequence of climate change: Mother Nature knows where the bodies are buried and now we do, too (via CNN)