Washington, DC, June 11, 2020 — The latest installment of What Worries the World shows that coronavirus/COVID-19 remains the topic adults in the United States and throughout the world find most worrying. However, the level of concern with coronavirus has decreased slightly since last month, both in the U.S. and globally. In the U.S., 61% cite the pandemic as one of their top three worries (down from 69% last month). Across all 27 countries surveyed, an average of 55% do the same (down from 63% last month).

The next most prevalent concerns in the U.S. are unemployment and healthcare (40% and 32% respectively). 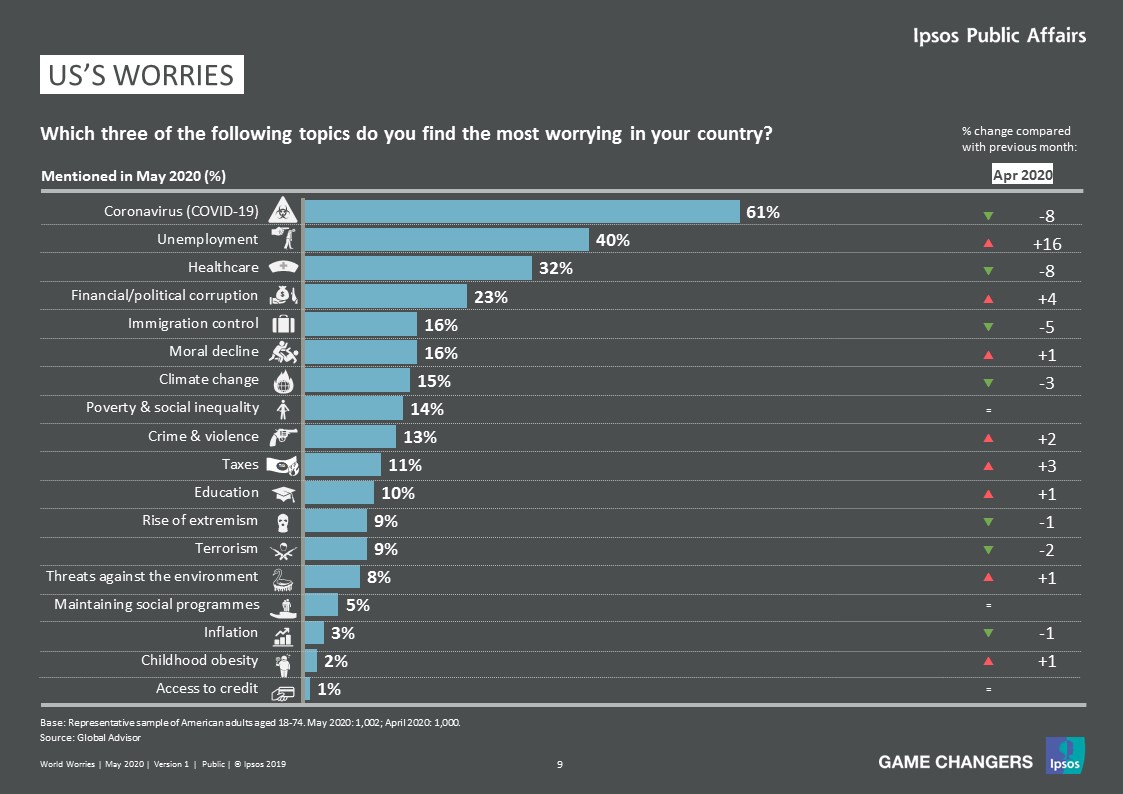 This is the second month that Ipsos has included Coronavirus/COVID-19 in the list of issues covered in its monthly What Worries the World survey. The latest wave was conducted between April 24 and May 8, 2020, among 18,505 adults aged under 74 from 27 countries: Argentina, Australia, Belgium, Brazil, Canada, Chile, France, Great Britain, Germany, Hungary, India, Israel, Italy, Japan, Malaysia, Mexico, Netherlands, Peru, Poland, Russia, Saudi Arabia, South Africa, South Korea, Spain, Sweden, Turkey and the United States of America.

Among the 27 countries surveyed, the coronavirus ranks as the top concern in 18 countries, down from 24 last month. Once again, concern is highest in Malaysia (74%), followed closely by Japan (73%) and Great Britain (71%). The U.S. falls toward the middle with 61% of American respondents citing coronavirus/COVID-19 among their leading worries.

The top worries globally remain unchanged from April. They are: COVID-19, unemployment, poverty and social inequality, healthcare, and financial/political corruption. 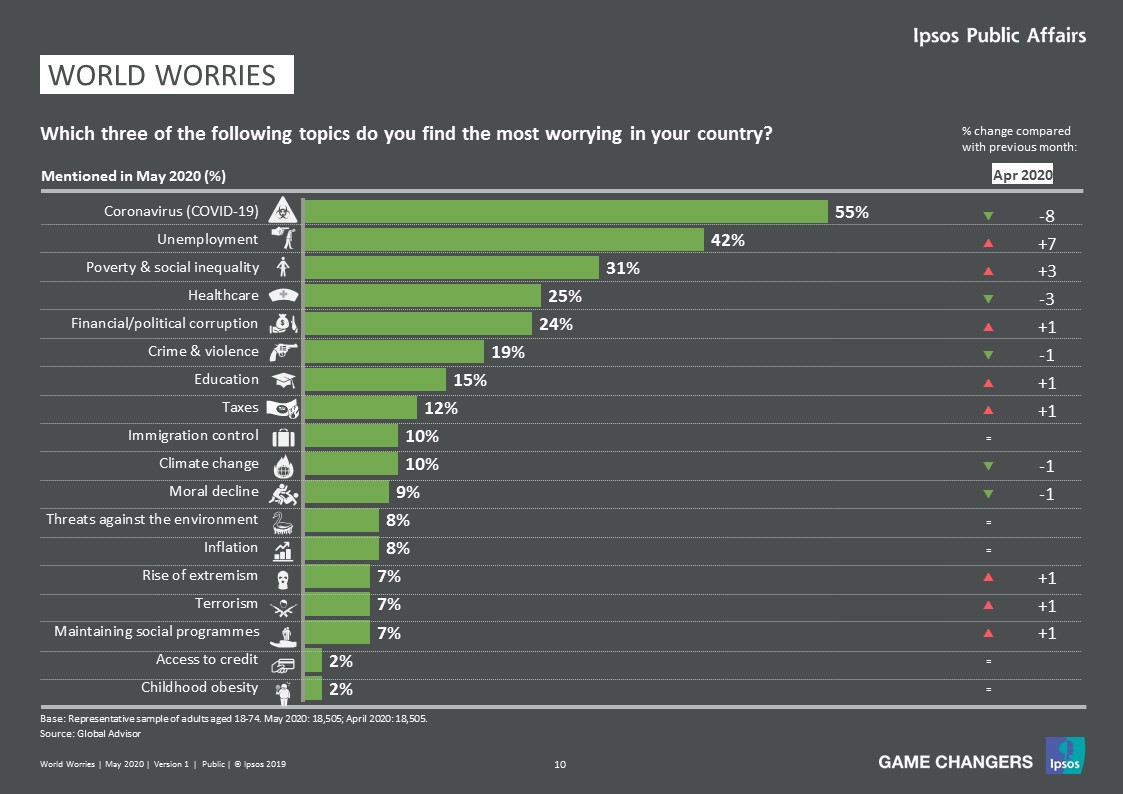 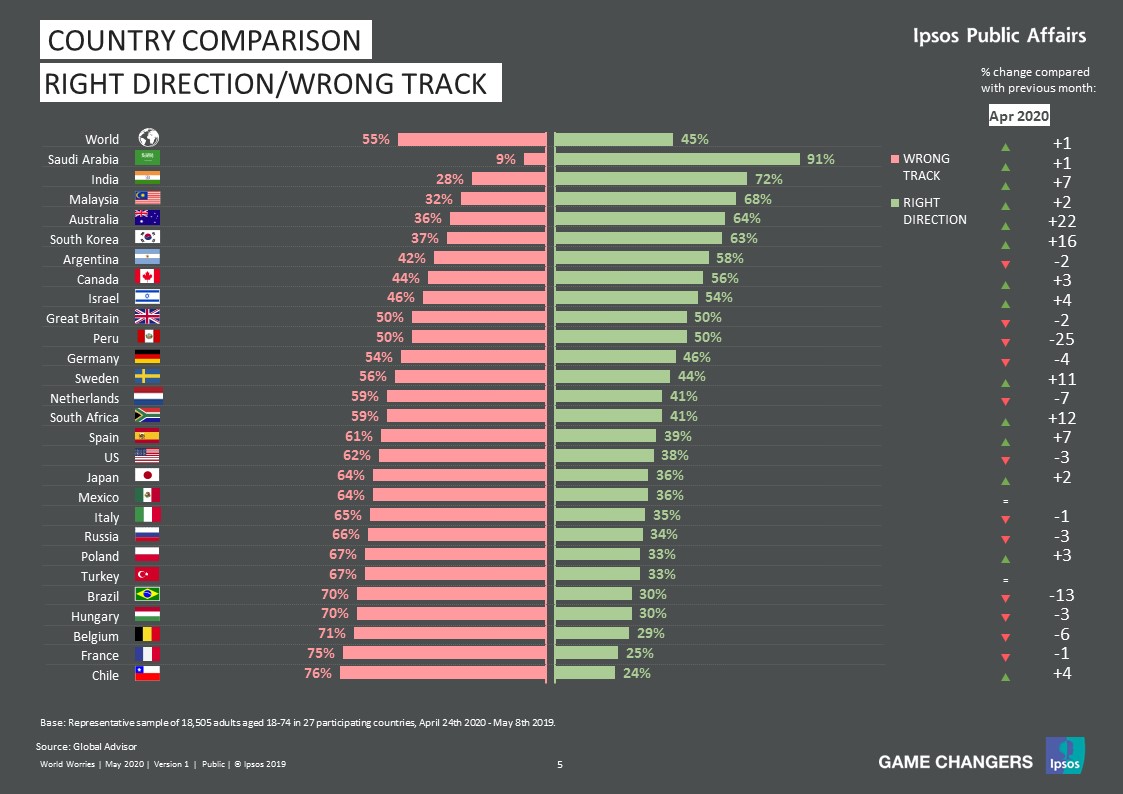 18,505 interviews were conducted between April 24 and May 8, 2020 among adults aged 18-74 in the United States, Canada, Israel, South Africa and Turkey and 16-74 in all other countries. Data are weighted to match the profile of the population.

In 17 of the 27 countries surveyed internet penetration is sufficiently high to think of the samples as representative of the wider population within the age ranges covered: Argentina, Australia, Belgium, Canada, France, Germany, Hungary, Israel, Italy, Japan, the Netherlands, Poland, South Korea, Spain, Sweden, Great Britain and United States. The remaining 10 countries surveyed: Brazil, Chile, India, Malaysia, Mexico, Russia, Peru, Saudi Arabia, South Africa and Turkey have lower levels of internet penetration and so these samples should instead be considered to represent a more affluent, connected population. These are still a vital social group to understand in these countries, representing an important and emerging middle class.

The data is weighted so that each market’s sample composition best reflects the demographic profile of the adult population according to the most recent census data. Where results do not sum to 100 or the ‘difference’ appears to be +/-1 more/less than the actual, this may be due to rounding, multiple responses or the exclusion of don't knows or not stated responses.