So we interviewed US voting age population in a rather different type of opinion poll:

Here’s what we found.

Just as in recent opinion polls, Biden leads. But here, the margin is tighter.

At the heart of our approach is a measure of closeness. “On a 10-point scale, how close to you feel to each candidate?”

The scores reveal 41% of likely Trump voters giving him a top box rating. This compares to 26% for Biden supporters.

And, turning to the other end of the scale, we find 84% of likely Biden voters giving Trump a bottom box score, whereas rather fewer Trump supporters (69%) put Biden in that bottom box.

So, at both ends of the continuum, there is more intensity around Brand Trump. 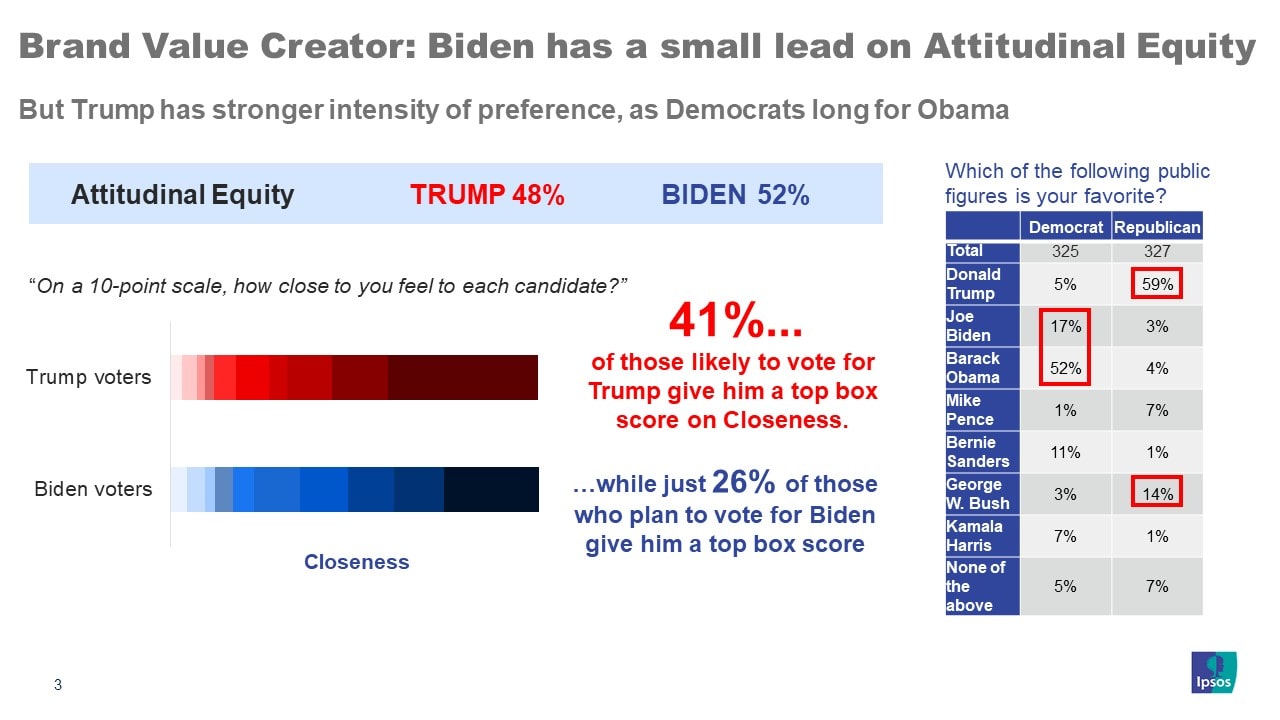 We also asked people to choose their favorite from a list of key US political figures:

While we realize that the passing of time means this may not be a totally fair comparison, it does underscore the relative lack of intensity in commitment to Brand Biden. If many Trump supporters are convinced that he will “Preserve the American Dream”, it seems that many of Biden’s supporters are “Dreaming of Obama.”

Trump at the center of intensity

The story continues when we look at our second (Brand Mental Network) exercise. Here we are seeing reactions to the question: “what pops into your mind when you think about Joe Biden or Donald Trump?”

What we find is that there aren’t many clear and unique associations with Biden. There are some references to his age and health. And there are some positives around being caring. But overall, Brand Biden is a bit nondescript. 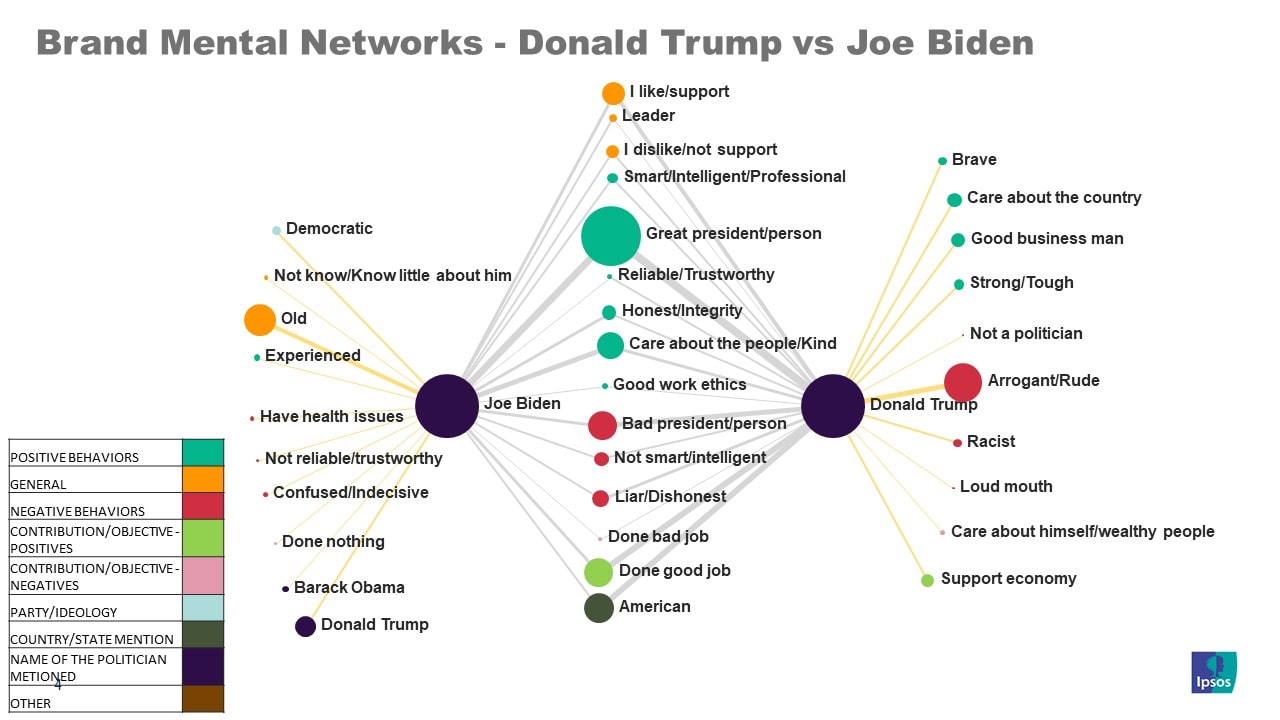 This is not the case with Trump, where we see more uniquely associated positives and negatives being raised. On the positive side, he is seen as a brave American businessman who can support the economy. But he is also seen by many as arrogant, rude, dishonest – and some view him as racist.

The intensity of associations flow through Trump.

What’s more, these associations are deep-seated. The chart above is based on interviews carried out in the wake of the President’s hospitalization with the virus. Even after a weekend full of headlines, this barely registers when when we ask what people associate with him; meanwhile, a number of people raise health issues about Biden. This not only confirms that the Trump brand is indeed well-defined, but also that the pandemic may already be “priced in” when it comes to this election.

The positives – and the negatives – flow through Trump

Our Multi Choice Response Time exercise incorporates a speed-based component to understand what is truly driving brand preference and – of potentially critical importance to the outcome – likelihood of voting.

We find that many are drawn to Donald Trump because they feel he “safeguards the American dream”. Trump supporters also see him as bold, good for the economy, intelligent, and as someone who will respect law and order while fighting political correctness. There are a few Biden negatives pushing voters towards Trump, but, collectively and relatively, these attributes aren’t having much impact.

At the same time, the Trump negatives are playing a large role. Perceptions of the President such as being corrupt, reckless, arrogant and as a liar are pushing many towards a vote for Biden. 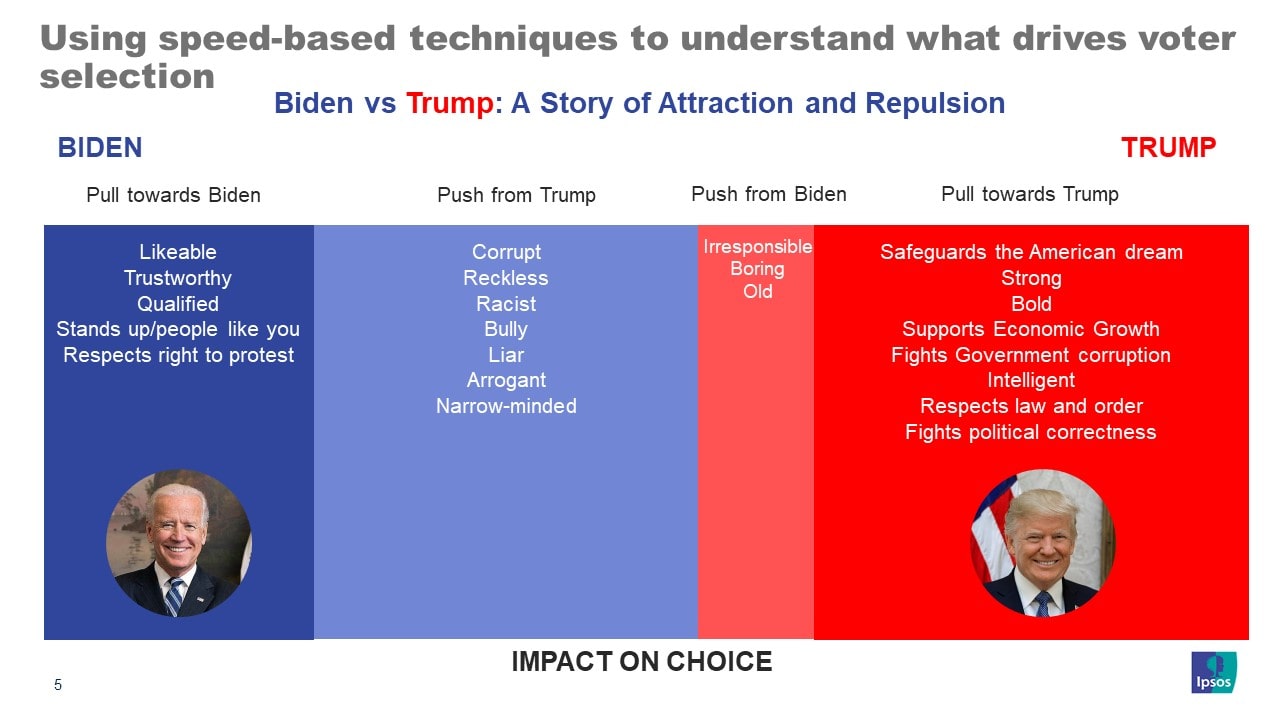 Joe Biden’s positives - his qualifications, his likeability - while more muted than the Trump positives, are playing a meaningful role in attracting voters to Brand Biden.

But the overall picture is one of “brand selection” being largely driven by that mental network of associations – positive and negative - a voter has with Donald Trump.

This could still be a factor in the election, as almost two-thirds of Republicans plan to show up in person to vote, whereas more than half the Democrats plan to do so at a distance – by absentee ballot or by mail. Taken with the points we made earlier about intensity of preference, one wonders what the impact on voter participation will be.

Biden has a modest equity advantage.

His supporters may be motivated to action by negative Trump associations - but “negative avoidance” is a risky strategy.

Vulnerabilities could discourage participation. Brand Biden is perceptually nondescript. And there is a lack of intense support amongst those who favor him, illustrated by their fondness for the Obama era.

To ensure conversion from preference to action, Brand Biden needs to build upon his positive associations as antidotes to Trump negatives: qualified, likeable, trustworthy.

Meanwhile, the comparative intensity of the Trump voter, combined with their willingness to venture to the polls, could yet yield another poll-defying November result.

But the intensity of Trump detractors could more than counter-balance the enthusiastic participation of Trump voters.

To broaden his appeal among the small group of persuadable voters, he will need to appeal to their economic sensibilities, and shift the focus of the campaign away from the coronavirus.

For the latest data and analysis on the US election, look in at the Ipsos in the US site or follow them on Twitter.