2 million public messages had been shared in French-language conversations on social media, just two days after self-isolation was put into place to tackle the spread of COVID-19. This is an exceptional level of activity which matches the exceptionalism of the steps taken by the Government in order to curb contagion.

In such an anxiety-inducing context, the French use social media as the epicentre of expression and information. Thanks to Synthesio technology, an Ipsos company, and to the use of algorithms by our data scientists, we can analyse consumer’s main topics of conversation in real time.

Instead of the traditional approach which would impose a pre-established, and often biased, analysis grid onto the content generated by consumers, we use Deep Learning techniques in order to get the gist of conversations posted in social networks, blogs, and forums. This allows us to access the entirety of the content without misrepresenting its true tone.

Every single post is taken into account and aggregated into topics which are generated bottom-up by the mere workings of artificial intelligence. This allows us to faithfully track and reflect changes in this content and thus assures us that we’re not ignoring a topic suddenly generated by a current event. Ipsos is able to run this analysis daily, despite the immense volume of the content, and to deliver reliable and immediately operational insights.

This blog is the first in a series that will shed a new light on the reactions, fears and expectations of the French population during this unprecedented coronavirus crisis.

The French respond to self-isolation with social networks

Conversation volume reached its peak when President Macron and Prime Minister Philippe publicly announced the steps that France would take. On March 12th the Head of State announced the total shutdown of schools and universities, on March 15th, all ‘non-essential’ public gathering places were closed, and on March 16th general self-isolation was instated.

The imposition of self-isolation at noon on March 17th coincided with a very high level of social media activity. This reached the highest level seen in the last 30 days, with 300,000 original publications and more than 740,000 re-tweets on Twitter. It appeared as though the French were responding to the loss of freedom of movement by moving to a place of virtual expression and exchange: “total isolation” is synonymous with “social network”.

Reactions to self-isolation and its impact overshadow all other conversations

More than one in four conversations detected by Synthesio from March 17th – 18th were about the consequences of self-isolation for everyday life. Changing habits are the prominent topic in online interactions, sometimes mentioned solemnly, sometimes with humour. The French also share experiences and advice on how to best make the constraints of this isolation more bearable. 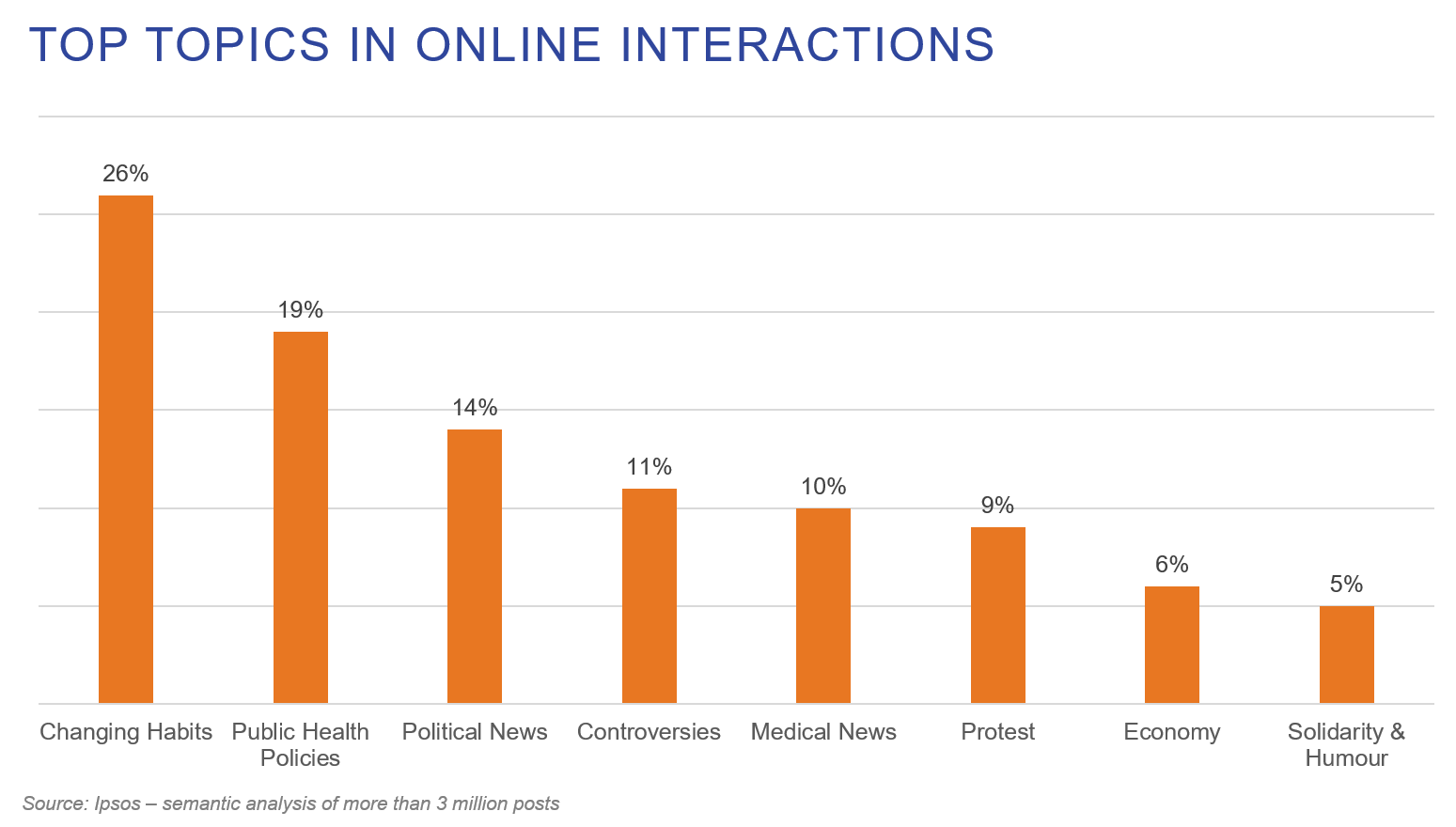 The second-most mentioned topic is the health policies instated by the government which are often compared to those of foreign countries, sometimes with some perplexity, and even expressing outright rejection. But there are also calls for a strict application of these policies, noticeably with the slogan “Stay home to save lives”.

48 hours after the beginning of self-isolation, controversies are still mentioned in social media with 11% of posts dedicated to the contradictory positions of some experts or the incongruity of the government having gone ahead with the first round of municipal elections despite the lockdown, but postponing the runoff…

Finally, non-abidance to the instructions by a few people seem to enrage some internauts, for example when they see Parisians crowding trains on their flight to the countryside or shoppers trying to break into the supermarkets’ stock reserves.

Humour is everywhere in social media threads, with much creativity and sharing, making them a real and positive outlet for the stressful experience of self-isolation. Advice and tips about how to entertain or educate oneself and keep the kids busy abound. You can also find many messages encouraging healthcare practitioners and expressing gratitude for the sacrifices they make and service they offer.

This paper is the first release in a series which will continue all through the crisis and will highlight what the French are worried about and what they question. Ipsos will thus shed a dynamic and unique insight into this unprecedented crisis. If you want to understand how your organisation can utilise social data in order to measure the impact of the coronavirus outbreak on your business, please contact us!