In a new global survey of 23,577 adults aged 16 – 74 in 31 countries, Ipsos found that climate change is a regular concern for half of people across a global country average. Concern is notably higher in South American countries, with Colombia, Chile, Mexico, Argentina and Italy all leading the way as those who think about the effects of climate change on their countries most frequently. Conversely Great Britain ranks in the bottom five countries who don’t think about climate change as much, beaten only by Japan, the Netherlands, Russia and China. 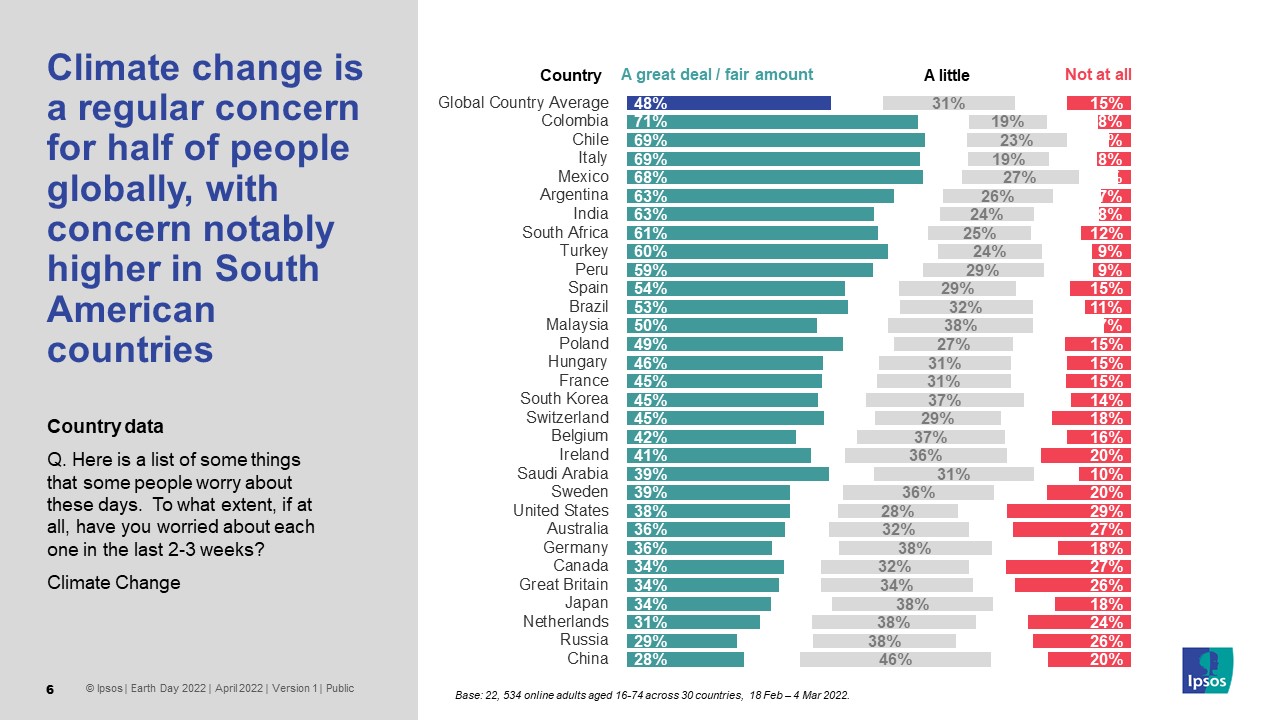 While climate change may not regularly be on people’s minds, it is not unrecognised. Seven in 10 (68%) are concerned about the impacts already being seen in their country, especially in South Africa and Chile, while a similar proportion (70%) worry about effects already seen in other countries.

The public believe there is a shared responsibility among government (77%), businesses (76%) and individuals (74%) to tackle climate change. Some business sectors are seen as having a greater responsibility for reducing their contribution to climate change – particularly energy companies (82%), car manufacturers (80%), airlines (77%) and public transport providers (77%).

The public recognise that the onus to reduce carbon emissions sits firmly on the shoulders of the individual. Nearly three-quarters (74%) of those surveyed agree that individuals are responsible for reducing their contribution to climate change by reducing carbon emission. The highest proportions were in South Africa (87%), Colombia (86%), Peru (84%) and Chile (84%). However, this does not excuse governments and businesses from doing their part. 77% say a great deal/fair amount of responsibility lies with governments while 76% say the same for businesses.

While the responsibility of governments is recognised by many, few are aware of any actions being taken. Only 39% agree that their country’s government has a clear strategy to tackle climate change. There is little difference in countries who already have legally binding commitments to achieving net zero such as Great Britain (39%), France (34%), Hungary (29%) and Sweden (38%). 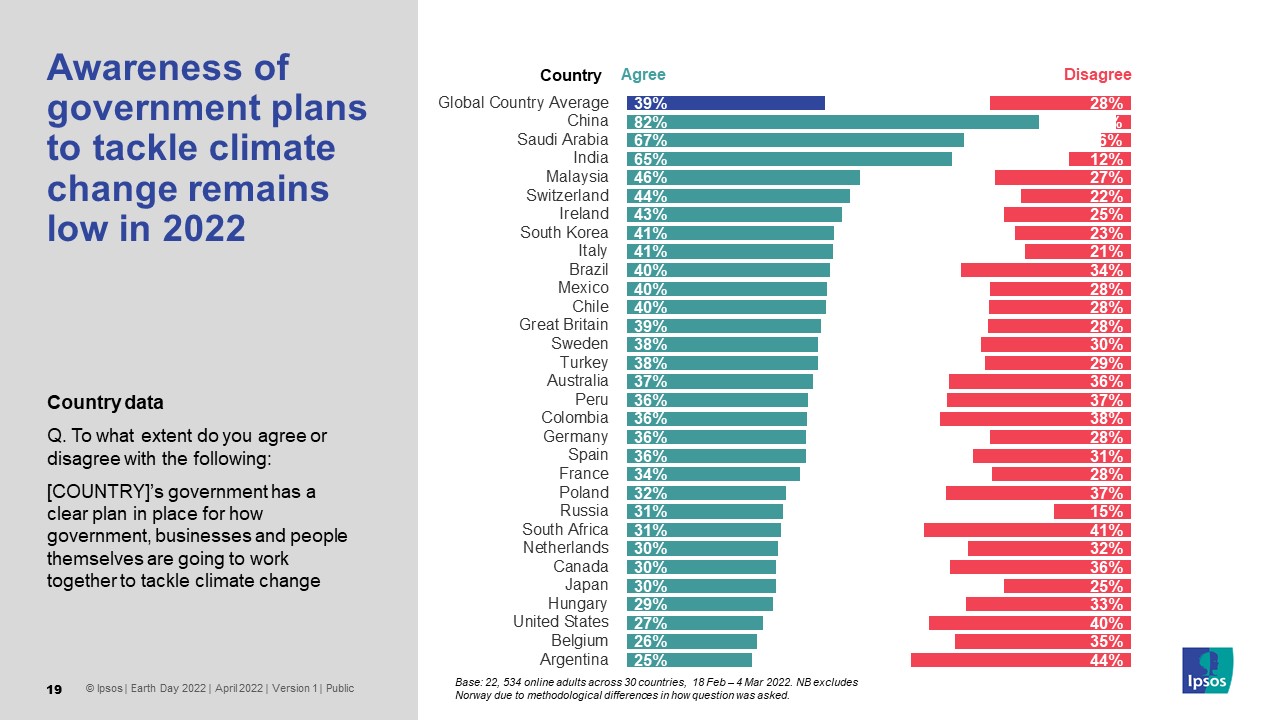 Despite 7 in 10 people being concerned about the impact of climate change on our planet, for the majority of people globally there are other issues they feel are more pressing, such as their family’s health, war, financial concerns and the ongoing pandemic.
People know that they have to change their behaviours in order to address climate change, but if the issue isn’t at the top of their priorities, they are unlikely to do so, unless there is an incentive that aligns with other priorities i.e.  saving money, and/or being better for the lives and wellbeing of their families.  So, there are real opportunities for businesses and governments to provide additional incentives and messaging that will encourage change amongst consumers, but they must also recognise the need for change themselves.  With 77% of people globally holding Government to account for the issue and 76% saying the same about businesses, it is clear that people expect to see real change, both in public policy and the private sectors.

Ipsos in the UK interviewed a representative sample of 23,577 British adults aged 16-74 in 30 different countries globally and 16-99 in Norway. Interviews were conducted using the Ipsos online panel system between 18 February – 4 March 2022. Data are weighted to match the profile of the population of this audience. All polls are subject to a wide range of potential sources of error.