Washington, DC, October 6, 2022 – A new Ipsos survey conducted in Ukraine among 3,000 adults finds that most have suffered substantial economic loss since the Russian invasion on February 24. The September 2022 wave of the Ipsos Ukraine Resilience Monitor estimates that employment has dropped significantly, especially in the frontline cities of Kharkiv and Mykolaiv where less than half of those surveyed are currently working. Overall, most Ukrainians surveyed report having incurred significant income loss over the past seven months. Yet despite the economic hardships, most of those who have a regular source of personal income such as a salary or a pension say they have been receiving payments on time.

The survey finds significant differences between the frontline cities and those in the rear when it comes to access to essential services. In Mykolaiv, only 55% reported having access to heating, 43% to hot water, and 26% to safe drinking water.

Ukrainians widely expect their government to lead reconstruction efforts. In all 5 frontline and rear cities surveyed, majorities say that the national government and the local authorities should take the responsibility for rebuilding their city.

Please see Mark Polyak and Fred Kagan’s contribution to TIME with their analysis of the Ipsos Resilience Monitor findings and what they imply for future reconstruction efforts in Ukraine.

Since the onset of the war, employment in frontline cities has plummeted. Only 40% of September survey respondents in Dnipro and 47% in Kharkiv reported being currently employed either full-time or part-time compared with 75% and 82%, respectively, who said they were employed before the Russian invasion – a drop of 35 percentage points in both cities. In both Kyiv and Dnipro, which are located in the rear of the combat zones, 63% reported being currently employed, 19 points less than the 82% who said they were employed before the invasion. Lviv, furthest from the frontline shows the highest level of employment (70%) and the smallest loss (9 points). 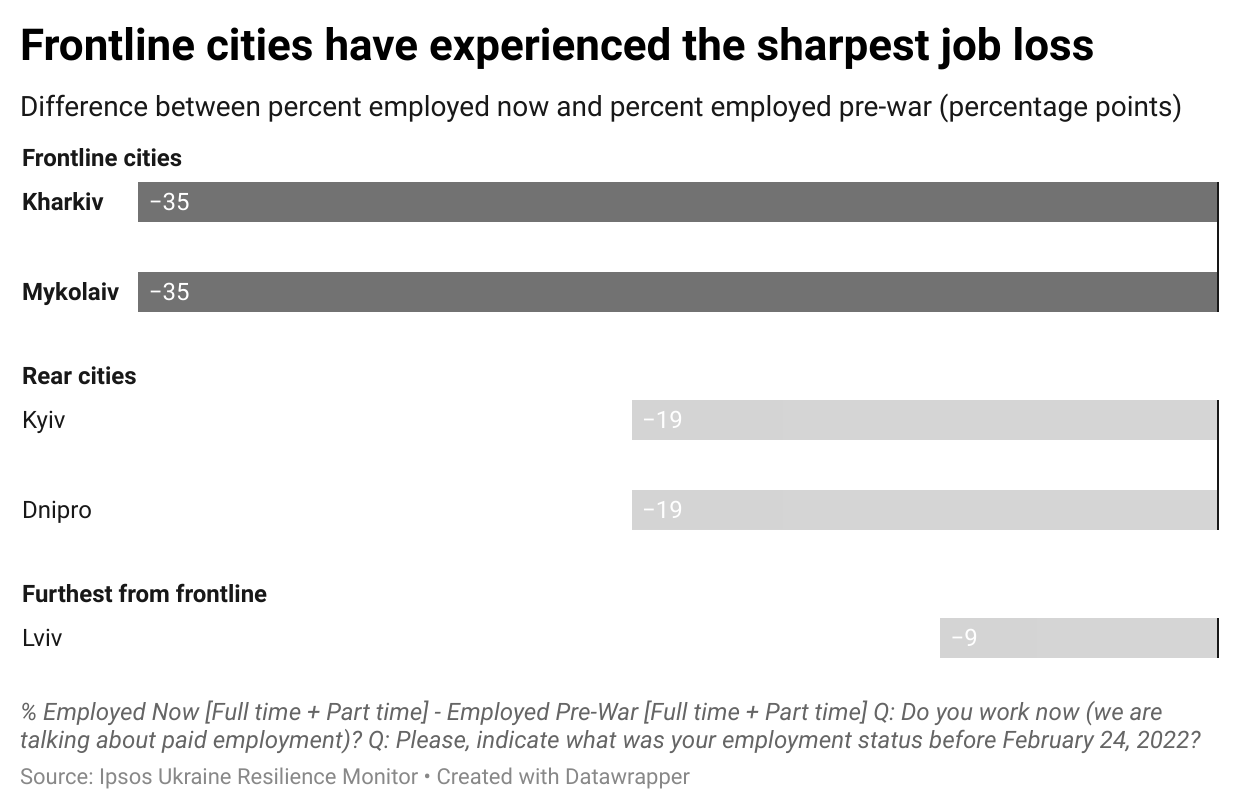 Majorities in four of the five cities surveyed say that they have experienced significant loss of income or have no personal income: 71% in Mykolaiv, 70% in Kharkiv, 59% in Dnipro, and 56% in Kyiv. In Lviv 38% did.

The September survey finds many essential services working in all or most cities – with notable exceptions. At least 98% in all five cities had access to electricity and to a mobile phone signal and at least 90% had internet access. However, while most in Lviv (91%), Kyiv (85%) Dnipro (81%) and Kharkiv (84%) reported having access to safe drinking water, it is only the case of 26% in Mykolaiv, which has been relentlessly bombed over the past seven months. Other essential services are also faltering in the city: only 55% of its residents report having heat and 43% hot water. 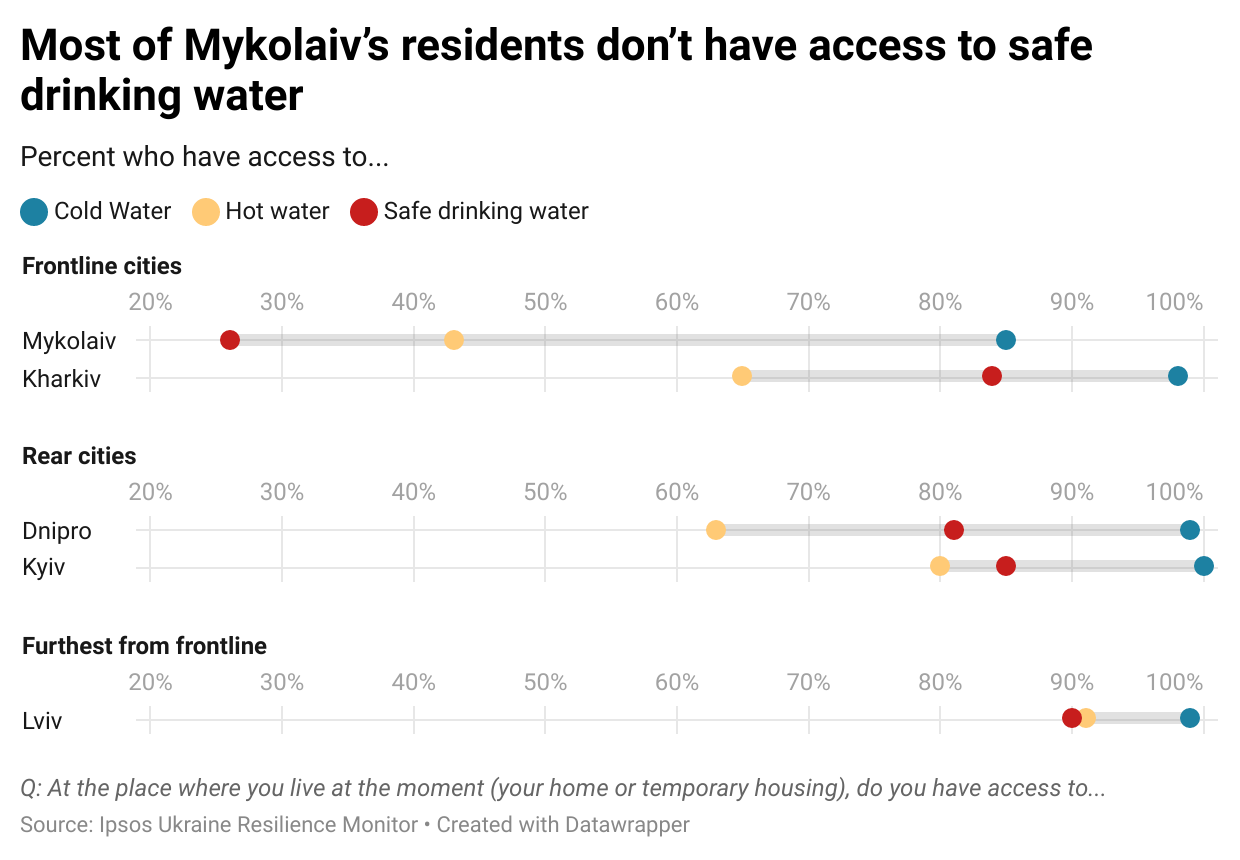 In all the five cities, only between one quarter and one-third report having experienced any delay with the payment of their source of personal income. Among those who did experience delays in salary payments, most say it is by no more than two weeks (between 59% in Kharkiv and 73% in Lviv). 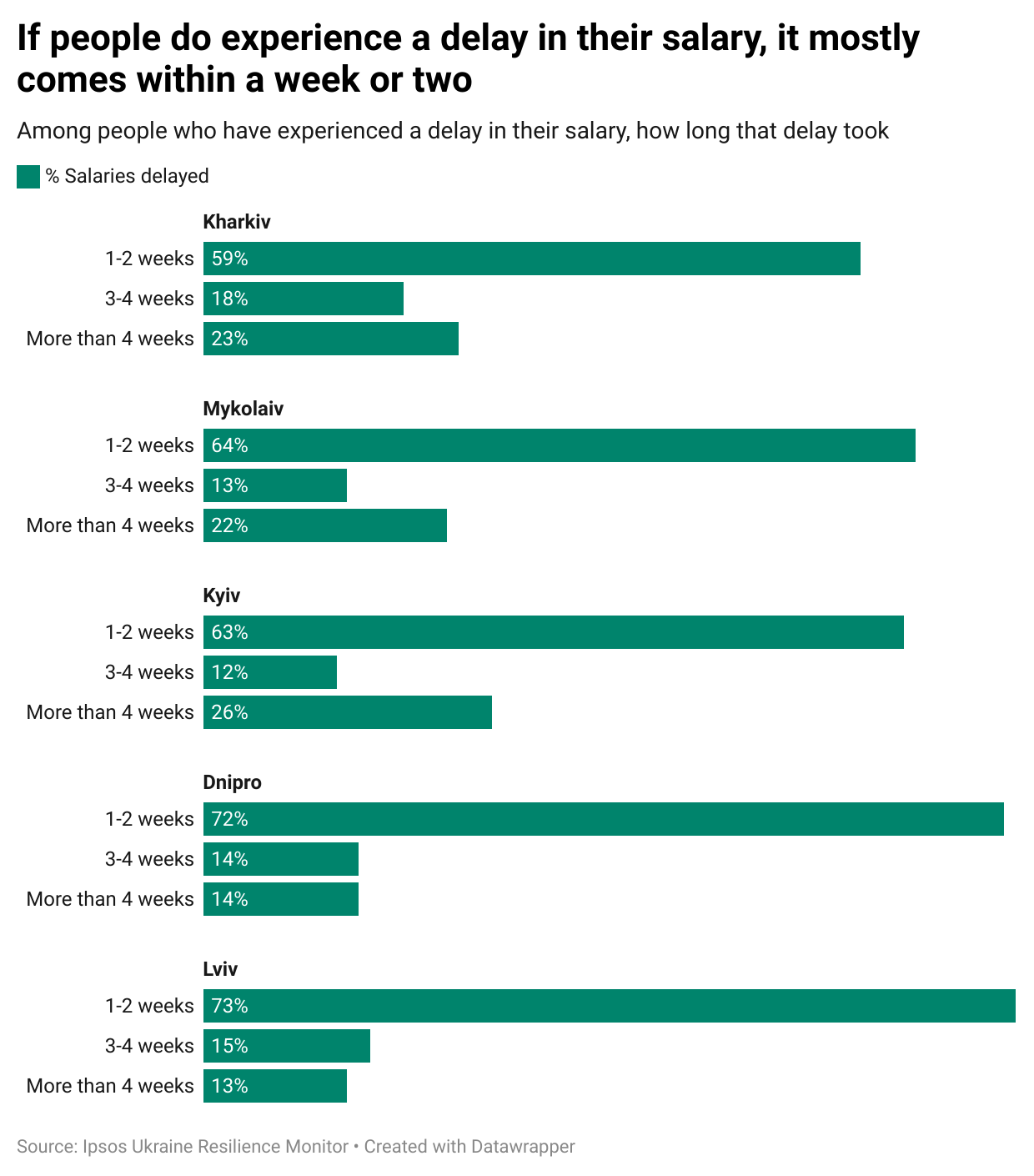 Lastly, across all surveyed cities, rebuilding is firmly believed to be the responsibility of the Ukrainian national government and local administration (64% and 63%, respectively on average across the five cities). These findings show that, although Ukrainians expect to be empowered by the international community, the vast majority put the onus of reconstruction on their country.

For more from this series, please visit our Voices of Ukraine mini-site. 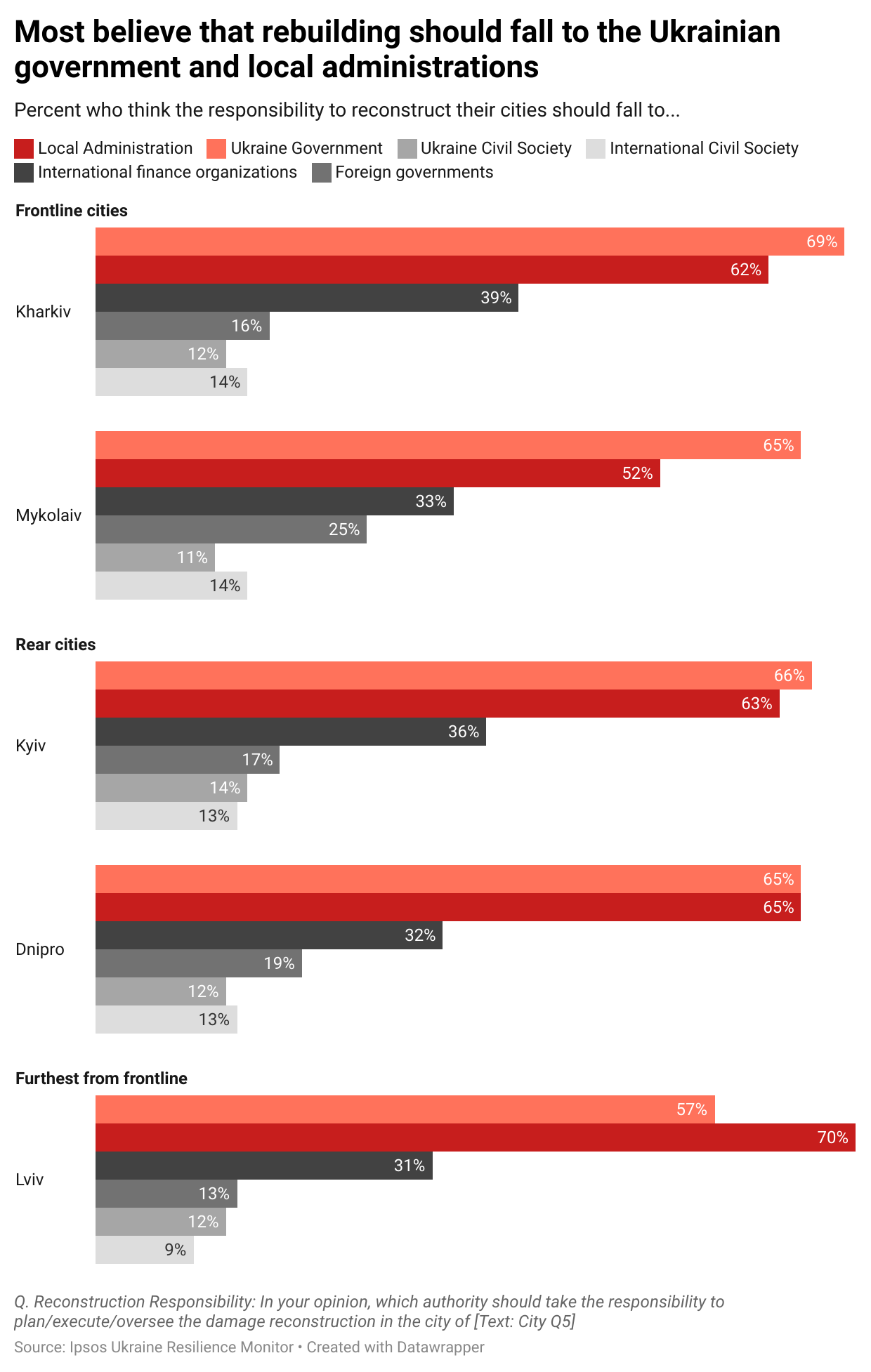 These are the findings of an Ipsos survey conducted September 3-8, 2022, among 3,001 adults aged 18-65 currently residing in Kyiv, Kharkiv, Dnipro, Mykolaiv and Lviv. The sample consists of 600 adults living in each of the five cities (601 in Kyiv). Interviews were conducted in Ukrainian on Ipsos’ own survey platform.

The sample for each city is balanced by gender and age weight to reflect the structure of the adult population identified in Ipsos’s Stand with Ukraine Barometer – a reference study based on 4,000 interviews over 5 waves/months among adults aged 18-55 residing in cities of 50,000 inhabitants across Ukraine (excluding ATO) with a natural flow on current region, gender and age, and quotas by region and size of city of residence before February 24, 2022.

The precision of Ipsos online polls is calculated using a credibility interval with a poll of 600 accurate to +/- 4.9 percentage points.