Four in ten Britons, 40%, choose solar energy infrastructure from a list of 14 sectors as a priority for investment in Britain, with 36% choosing wind energy. Flood defences (39%) and rail infrastructure (39%) are also among top priorities.

Environmental impact is top-ranked among seven possible considerations in planning future infrastructure plans by 28% - up from 19% in a similar question asked in 2017 - followed by achieving the highest possible quality (21%) and future resilience (17%). Local disruption and private/public ownership of infrastructure are most likely to be ranked bottom of all factors.

The findings come from the latest Global Infrastructure Index survey conducted by Ipsos MORI in partnership with the GIIA in 28 countries across the world including Britain.

Overall, satisfaction with infrastructure in Britain has increased by 7 points to 36%, whilst dissatisfaction is down 4 to 29%. These figures are in line with the global averages (28 other countries) and those for G8 countries, but Britain is well ahead of the European average.

British airports are rated more positively than anywhere else in Europe (10 countries) and 13 points higher than the European average. Ratings of water supply and sewerage come second only to Germany across the 28 countries and are 18 points higher than the global average. Electric vehicle charging infrastructure comes bottom of the 14 sectors with just 19% of Britons positive about this. Britain is behind only three countries in terms of public ratings of wind energy infrastructure. 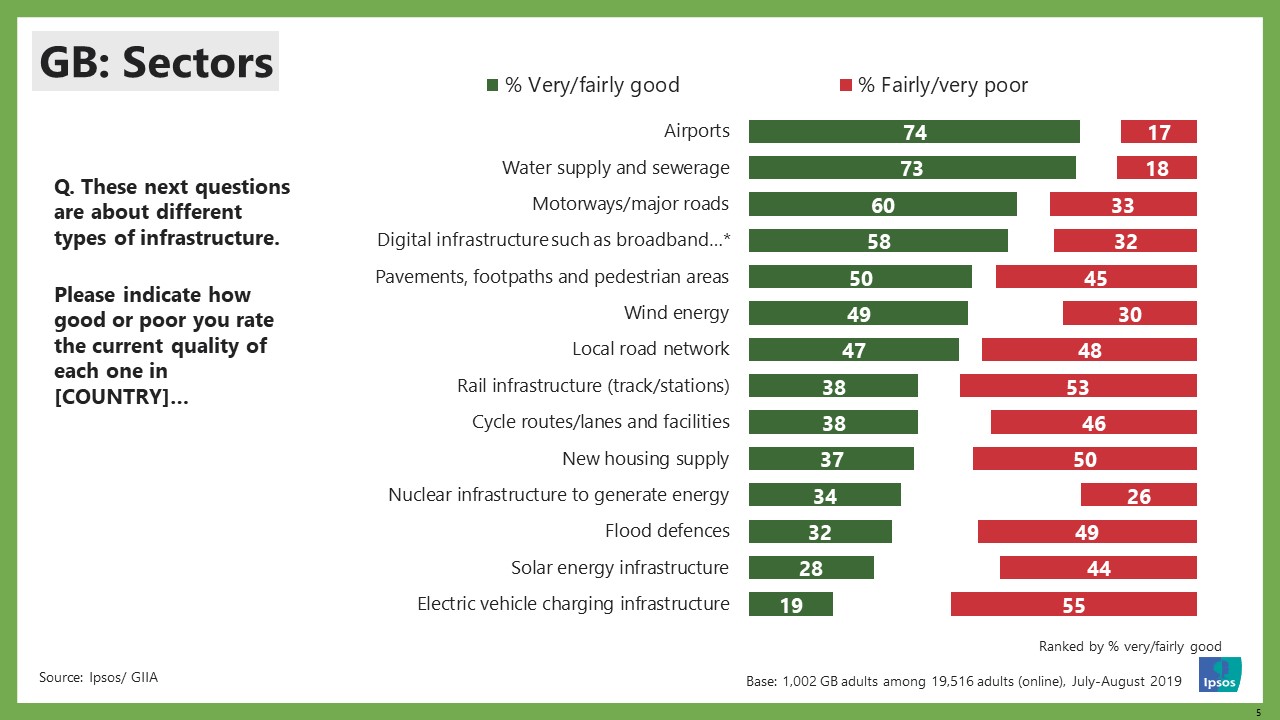 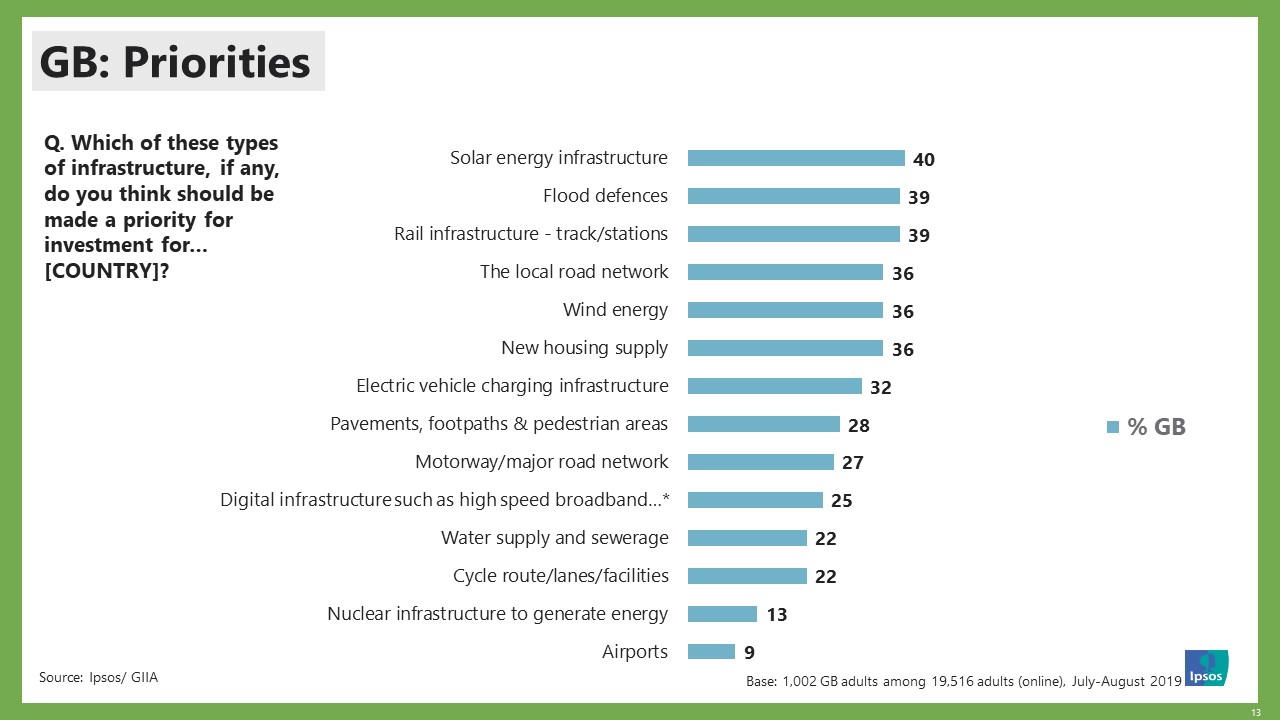 As with publics across the 27 other countries, Britons warm and cool towards building new infrastructure depending on different factors. These have significant impact, revealed by levels of support ranging from 20% to 78%.

While Britain is a relatively sceptical country – ranking 21 out of 28 in terms of in-principle support for building – we are as high as fifth if the infrastructure is environmentally friendly overall, but bottom of all 28 countries if building means an increase in traffic and congestion, and involves ‘greenfield’ i.e. land that had not previously been built on. 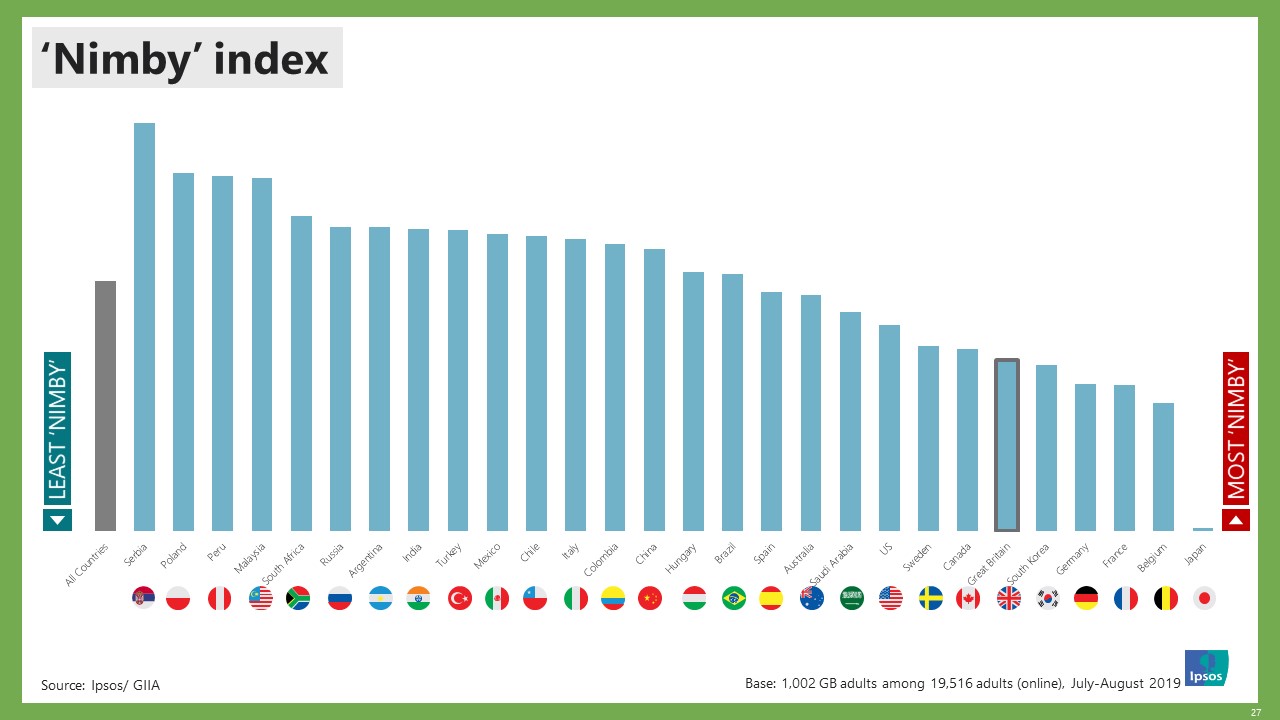 The general election campaign kicked off with commitments from both parties to spend big on Infrastructure. This ought to appeal to a widely-held sentiment - evidenced again this year - that Britain’s infrastructure is not fit for purpose.
Our survey highlights challenges too. People are cool on funding through more taxes and government borrowing, and the low regard people have for politicians is seen in the preference for technical experts to the first say on decisions. There are some plus points; ratings have improved after a dip in 2018, while investment in renewables like wind energy are reflected in positive ratings of these. The environment is a stronger theme this year and renewables are among the public’s top investment priorities in Britain.
Our new 'Nimby Index' underlines the importance of engaging local communities, as well as the wider population, on the case for new infrastructure. The why, how and how much are as important as the what.

Data has been weighted to known country population profiles About GIIA Global Infrastructure Investor Association (GIIA) is the membership body for the world’s leading institutional investors. On their behalf, we work with governments and other stakeholders to promote the role of private investment in providing infrastructure that improves national, regional and local economies. Collectively, GIIA members have more than £500bn in infrastructure assets under management across 48 countries.