New research by the Climate Engagement Partnership, a collaboration between Ipsos and the Centre for Climate Change and Social Transformations, finds that a majority of the UK public support seven out of eight key net zero policies. Frequent flier levies receive the highest levels of support at 68%, followed by pricing products to reflect how environmentally friendly they are, phasing out the sale of gas and coal boilers and electric vehicle subsidies, all on 62%.  The least support is shown for a policy that would increase taxes on red meat and dairy, at 47%. 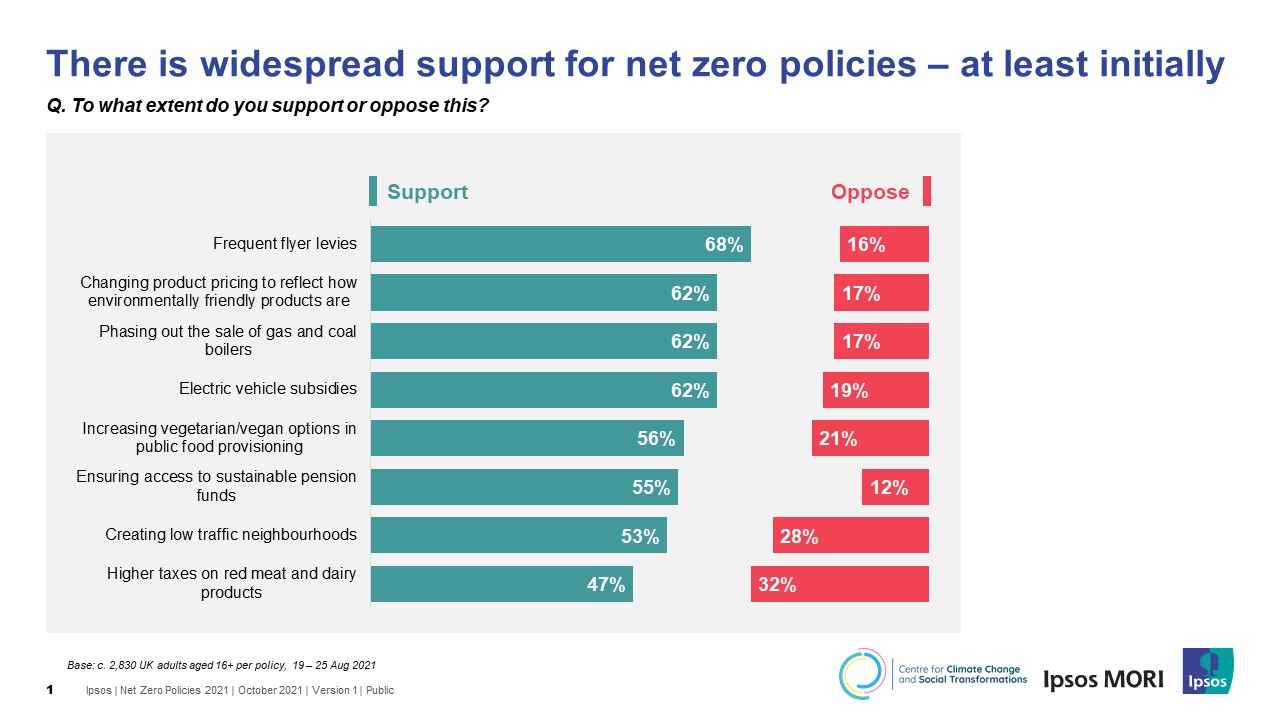 When the Climate Engagement Partnership asked the UK public whether they still supported the above eight policies if they personally impacted them – for example, they couldn’t take flights very often or they couldn’t install a gas boiler – the level of support dropped for all policies, except product pricing to reflect the environmental impact of the item.  Most markedly it dropped in relation to the frequent flier levies. 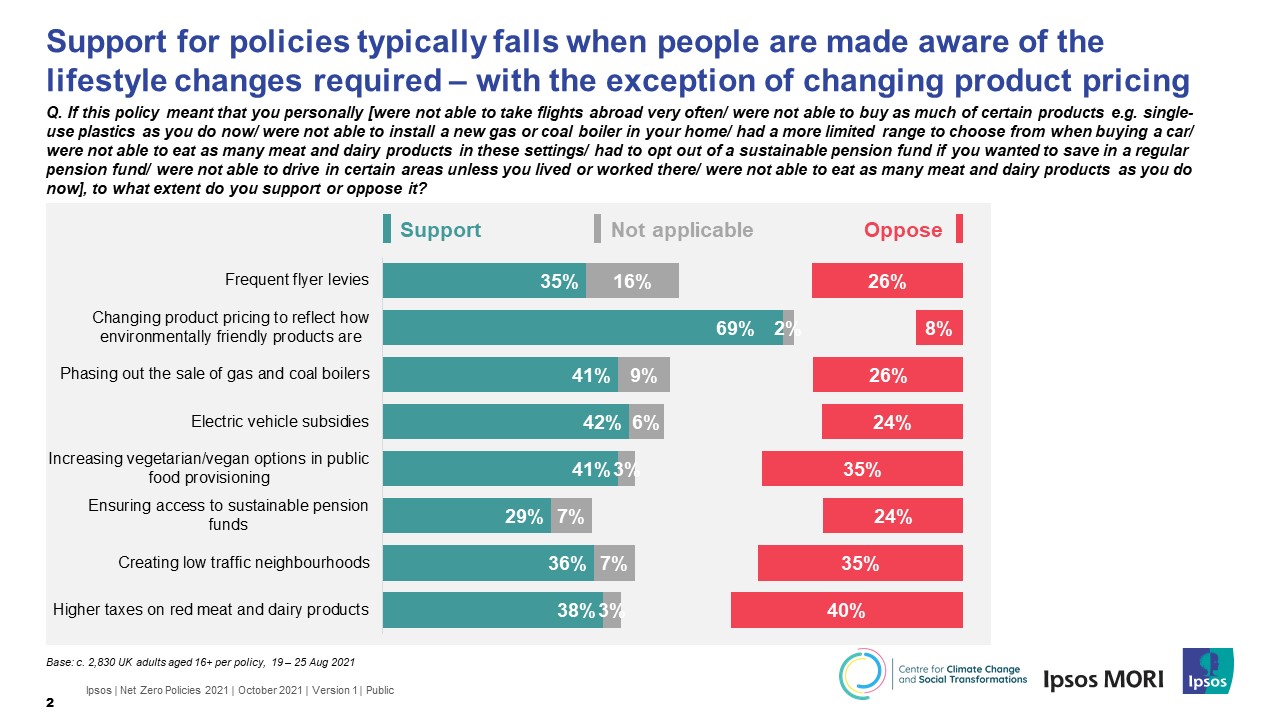 Support falls significantly further when people are made aware of the potential financial implications of the policies for them personally – such as having to pay more council tax. 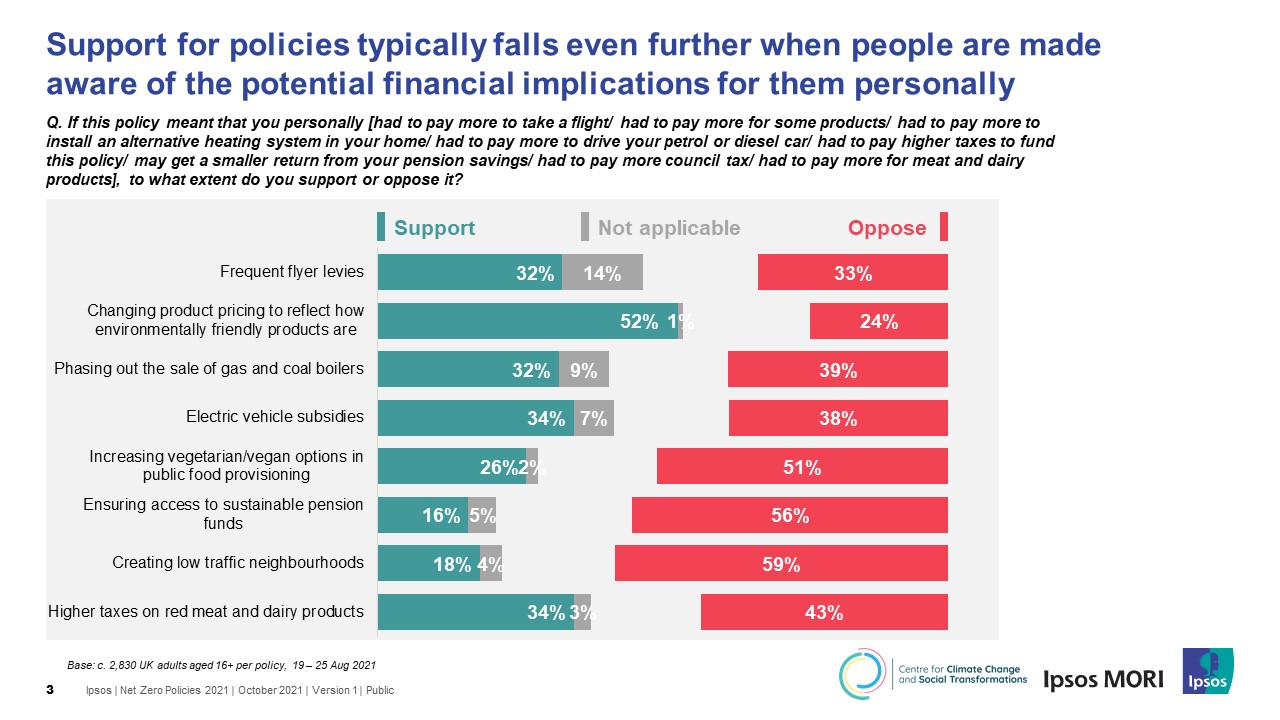 While the public support these policies when they are outlined initially, that support falls dramatically when they are presented with the possible lifestyle and financial cost implications for them personally. Just one policy remains more popular and is the exception to the rule: changing product pricing to reflect how environmentally friendly products are, which is still supported once the lifestyle and cost implications are outlined.

Eight in ten (83%) of the UK public say they are extremely/very/fairly worried about climate change and over two thirds (68%) say they think the UK is already feeling the effects of climate change. Half (54%) think that the UK needs to reduce its carbon emissions to net zero sooner than 2050.

People identify travel, home energy and consumption as the three most important areas where both  government and individuals should take action. 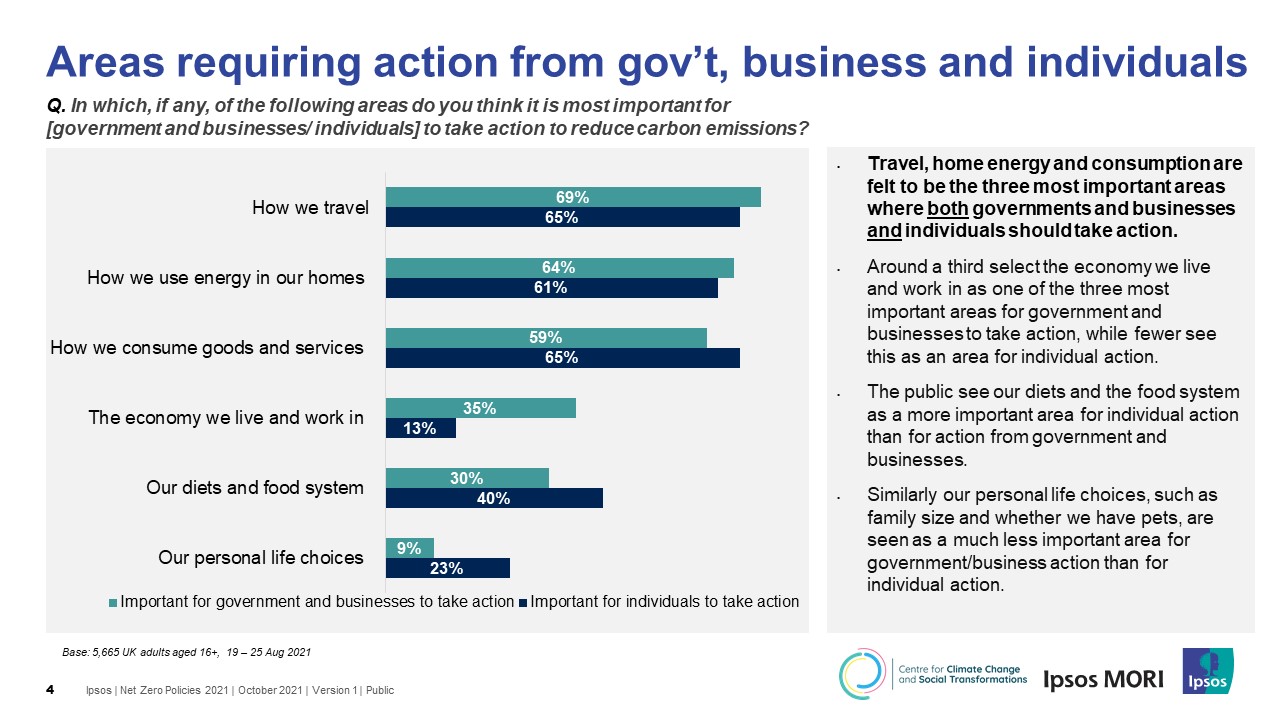 Support for net zero policies is higher amongst homeowners, those that are more financially secure, those that identify as ‘left’ wing and hold communitarian views and those that are already engaged with and feel knowledgeable about the topic.

In contrast, support for electric vehicle subsidies, increasing vegetarian/vegan options in public food provisioning and phasing out the sale of gas and coal boilers is higher among younger people.

Support for net zero policies is lower among those who voted Conservative at the last election than it is among those who voted Labour, Liberal Democrat or SNP, which represents a challenge for Boris Johnson’s Government. Before the lifestyle and cost implications are mentioned, more Conservative voters say they support each policy than oppose it, with the exception of higher taxes on red meat and dairy. Once the lifestyle and cost implications are outlined, though, Conservative voters oppose 7 of the 8 policies: the only policy that remains popular is changing product pricing to reflect how environmentally friendly products are.

In contrast, Labour voters still support 5 of the 8 policies once the lifestyle and cost implications are outlined: changing product pricing to reflect the environmental impact of the item, higher taxes on red meat and dairy, frequent flyer levies, electric vehicle subsidies, and phasing out the sale of gas and coal boilers.

This research shows that people are very worried about climate change and they are broadly supportive of implementing policies to tackle the issue. However, people struggle to accept the personal impact policies may have on them.  These new findings illustrate some of the challenges the Government faces in reaching its net zero target by 2050, but by understanding these barriers there is also the opportunity to support the public through this transition.

This support provides further evidence that the UK public want urgent action on climate change, but may not yet be fully aware of the implications for individuals of doing so. There is a need to raise awareness of the costs of action but also of inaction, and for net zero policies to be designed in ways that generate wider benefits to people’s health, wellbeing, and financial stability.

This data is the first in a series of research that will be run by the Climate Engagement Partnership, a partnership between Ipsos and the Centre for Climate Change and Social Transformations, with the aim of exploring public attitudes to the issue of climate change and raising awareness of barriers and opportunities to change.