Almost everyone wants brands to be funny, but few think brands are getting it right.

Over the past few years, the entertainment landscape has evolved alongside the shifts in the political and social climate. People are hungering for lighter entertainment as we near an endemic state (as we found previously in our report on languishing). That sentiment has continued to rise in recent years as tensions have increased across multiple vectors.

Three in four (77%) participants in a recent Ipsos online community study* indicate that comedy is the most-watched entertainment genre, demonstrating a nearly universal appeal. But the specifics of sense of humor are highly personal—and often influenced by outside factors such as age, income level and political ideology.

It makes sense, then, that a sizable majority of people like it when brands use humor to connect with them. But people also feel that few brands are doing it right, making it crucial for brands to pay close attention to their target audience’s tastes if they hope to be successful. Here’s what brands need to know.

81% of consumers like when brands use humor, but only 28% say brands connect with their comedic sensibilities

People are clear about humor: brands should use it when communicating. And beyond the pure enjoyment of comedy in ads, about 80% indicate they would also see the brand in a more positive light if they partnered with their favorite comedic content producer. This is even more true for younger generations, as 90% of Gen Z and Millennials would perceive the brand more favorably.

But it’s critical to get the tone right. Despite this openness and expectation surrounding the use of humor, community members cite few brands that deliver. Progressive’s “Unbecoming Your Parents” and Allstate’s “Mayhem” are some of the only examples that resonate across demographic divides.

In diving deeper, Millennials are particularly fond of Match.com’s “Match Made in Hell” campaign, while Gen X appreciates FTX’s Super Bowl commercial with Larry David. On the other hand, Gen Z sparked to the humor provided by Wendy’s Twitter account and called out a recent Dunkin’ At Home commercial with Rapunzel as resonating with them.

People connect most with comedy that’s clever, non-political or tells a story

Preferences for unscripted comedy lean toward genres that are more commonly represented in movies, television spots and stand-up performances from some of the most popular names—Dave Chappelle, Kevin Hart and Amy Schumer topped the list, followed closely by Jerry Seinfeld, Robin Williams and Chris Rock (this study was conducted before the Oscars).

It’s worth noting, however, that George Carlin holds a special place in the heart of Boomers and Gen Xers, while Eddie Murphy jumps out for Gen Z.

In looking at the comedians they favor, younger audiences tend to “share the wealth” and are inclined to highlight both big-name comedians (as showcased above) as well as comedic content creators from social media and the world of podcasting as their favorites. In this group, you’ll find statistical significance in preference for names like Ali Wong and Aziz Ansari alongside Avery Monsen, Brittany Broski and Alex Cooper.

People are clear about humor: brands should use it when communicating 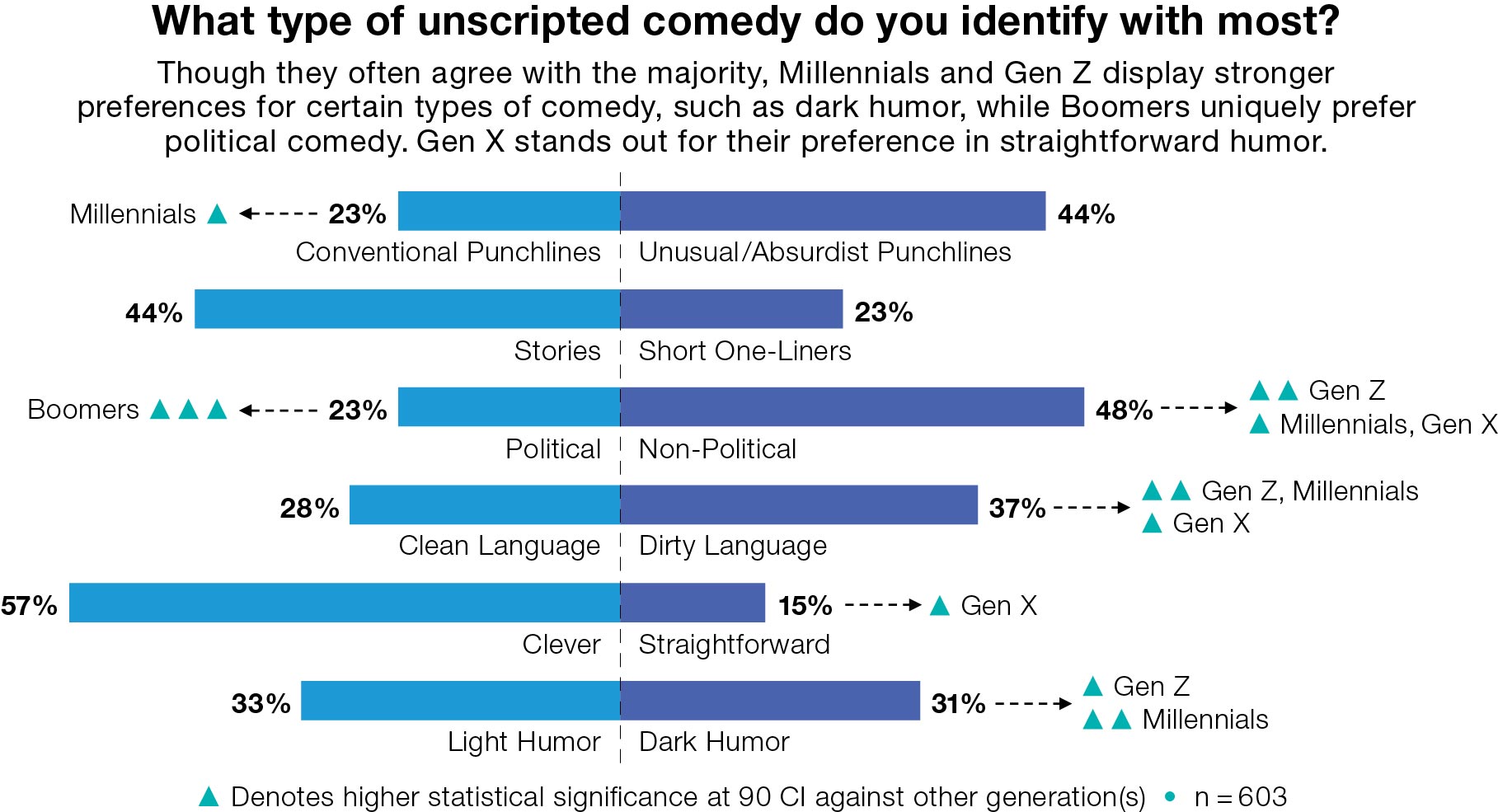 74% of respondents say comedians should be forgiven for past jokes

Beyond even age or gender, political ideology has the strongest influence on opinions related to comedy’s place in the world. Those who self-identified as leaning left politically are more likely to agree with statements like “Comedians have a duty to prevent the spread of misinformation” (54%, 10 percentage points higher than the average) whereas those who identify as more right-leaning are likely to agree that “Cancel culture is a problem in comedy” (78%, 19 percentage points higher).

Similarly, those who lean left are more likely to agree with the idea that “Comedians have a responsibility to comment on social/political issues” (40%, 4 points higher than average). Meanwhile, those on the right agree more strongly with the idea that “Comedians should be forgiven for past jokes that are now seen as offensive” (84%, 10 points higher than average).

That isn’t to say that demographic components have no impact—for example, men are statistically more likely to display a preference for comedy that “pushes the envelope or is borderline offensive” (72%, 10 percentage points higher than average) while less than 60% of women would say the same.

“TikToks and Facebook reels are the ones I use the most and they are well suited because you can scroll and watch and they make it easy to laugh at them when they are funny.”

While all age groups tap into video streaming platforms, younger groups often turn to social media such as YouTube, TikTok and Instagram for a quick laugh: especially Millennials (64%) and Gen Z (79%). They enjoy the platforms’ reels (short and compelling snippets of content that automatically provide a continuous content feed), and value them for their ease of access, quick punch and authentic creativity that can be absent in more polished formats like the network television preferred by older generations.

These younger groups also express an affinity for memes that cleverly encapsulate a shared experience, feeling, or cultural event often in a dark or unexpected way, through the pairing of well-known images with short captions. 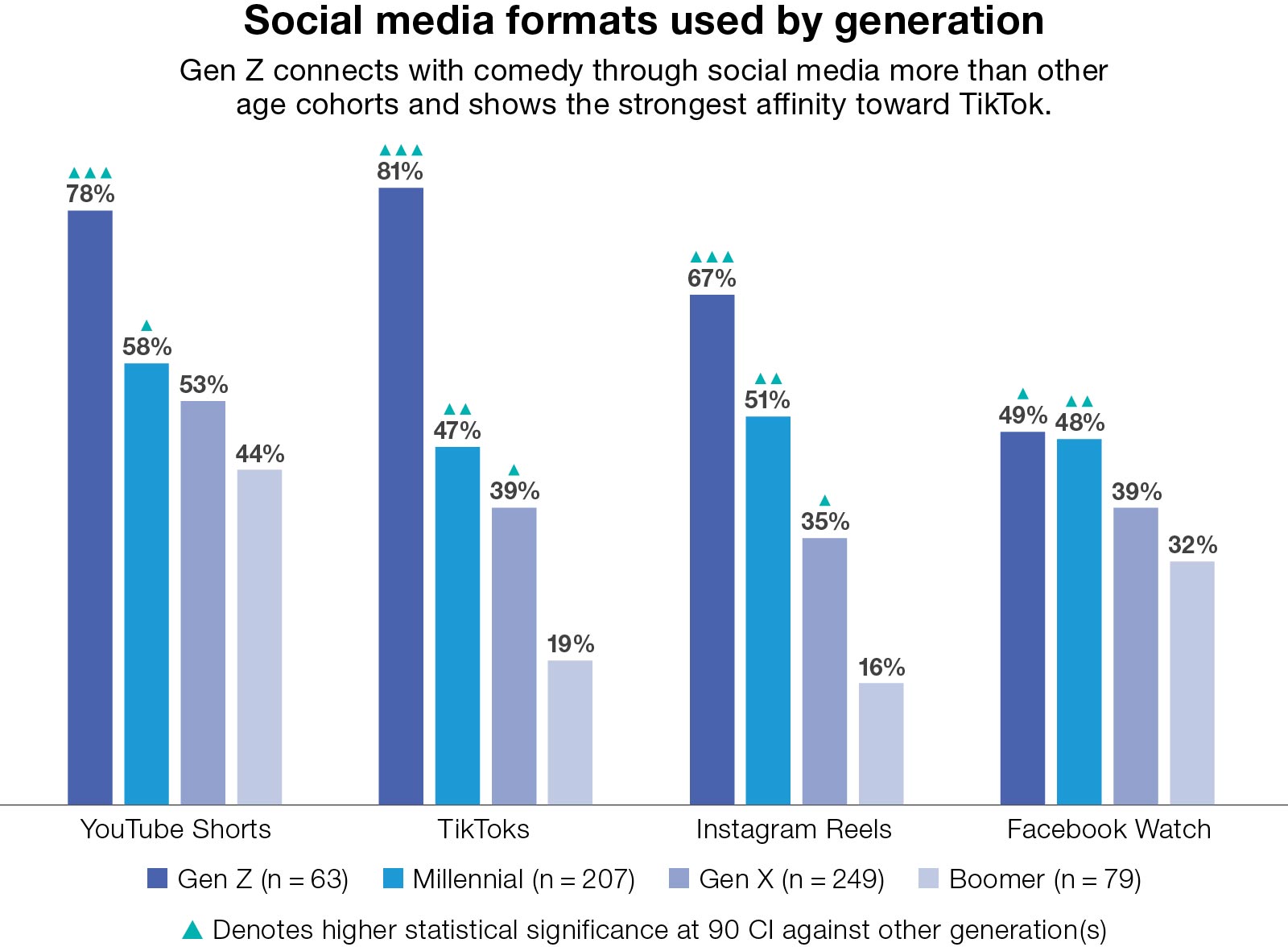 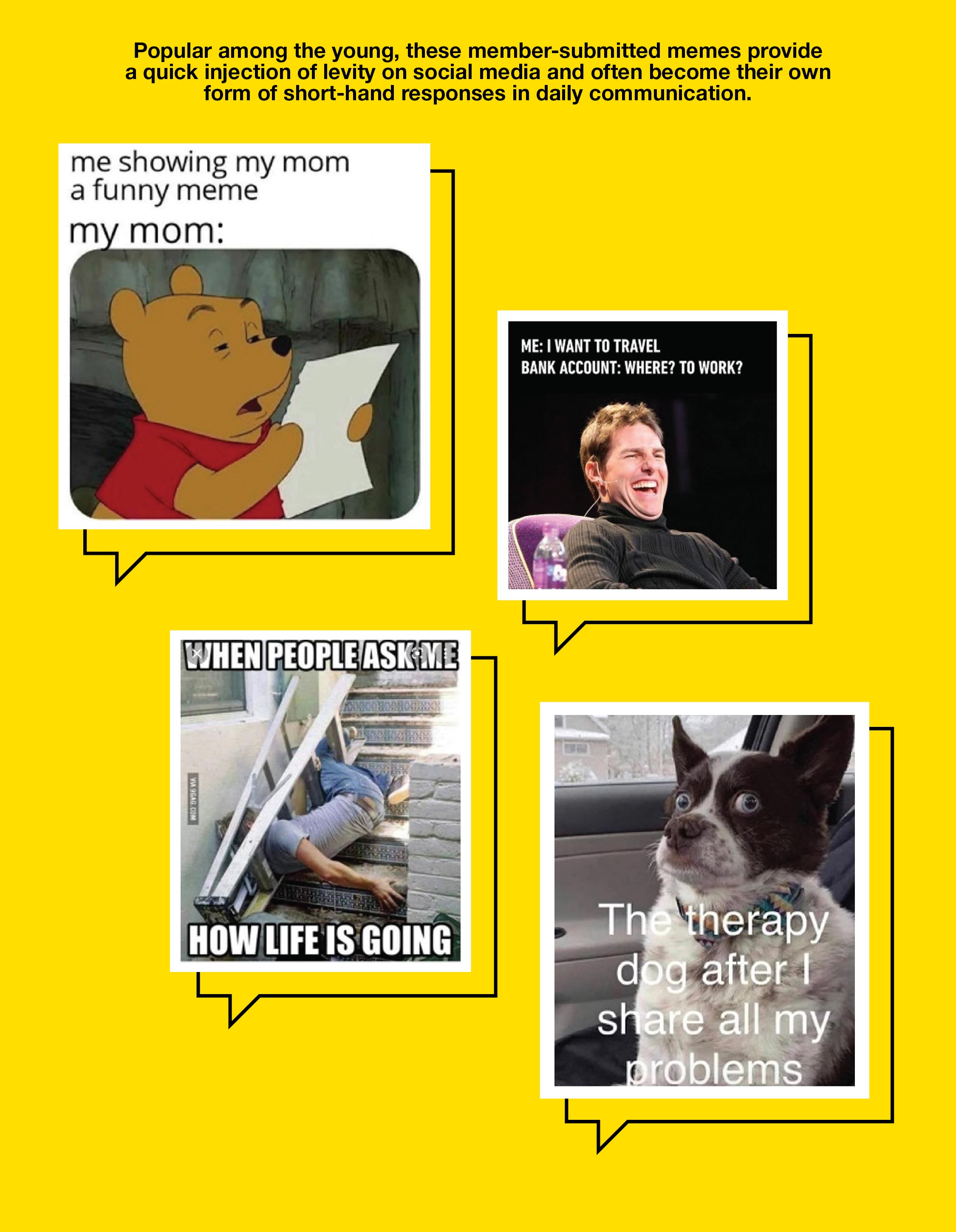 “[Memes] are simple and very varied. I love it because a single meme can have several interpretations.”