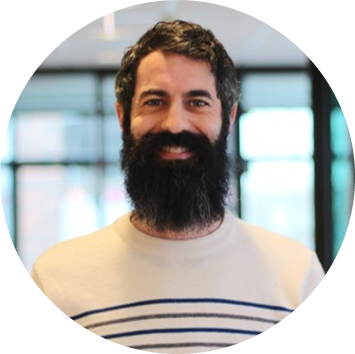 Born in Oregon, The United States of America
Holds a Master's degree in Electrical Engineering
Focusses on Mathematics • Used to be a Fashion Designer

I’m an experimentalist at heart, and I enjoy being able to formulate a hypothesis and test it.

Nicholas Kosmicki is a true experimentalist with great analytical skills. He knows how to bridge the gap between technical and non-technical people within an organisation. Nicholas’ highest degree is a Master of Science in Electrical Engineering and from 2014 onwards, he’s worked in several Data Scientist roles at different companies in both the USA and Amsterdam. Last stop: Ipsos. And we’re lucky to have him.

Not only did Nicholas work in different countries around the world, he also has an extensive background when it comes to domains. He worked in Finance, Logistics, Fintech, IT and biology, just to name a few. Therefore, Nicholas is capable of taking any process and work with it as a result. He describes himself as being “problem-driven, not domain-driven”.

“At Ipsos, there’s always something new to learn.” This is one of the main reasons that Nicholas likes to work in his current role. He has done great work for several international projects and clients so far, but he’s most proud of one particular project: modernising the data pipelines for several Trackers in the US and Canada. "I'm helping clients merge Behavioral Science principles with Data Science, so that they can have an actionable perspective on their customers." Meaning he is working to distill behaviors into quantifiable strategies.“

Would you like to have a (digital) cup of coffee with Nicholas Kosmicki? Get in touch with him.