With the British referendum on European Union (EU) membership on 23 June rapidly approaching, a new poll from Ipsos reveals that half (49%) of Europeans in eight other EU countries believe that Britain will vote to leave the EU. The survey is published on Europe Day, the anniversary of the Schumann declaration arguing for greater political cooperation in Europe, viewed as one of the founding moments of the European Union.

Views outside the EU, in North American (Canada and the US) and three major Commonwealth countries (India, Australia and South Africa), are closer to those of Britons. Across those five countries, 38% think that Britain will vote to leave the EU. 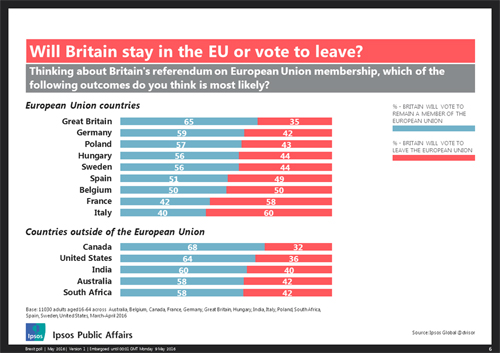 Almost half (45%) of Europeans in the researched countries think their own country should hold a referendum on its EU membership. Again support for a referendum varies, though is never lower than four in ten, from 38% in Hungary to majorities in Italy and France (58% and 55%). 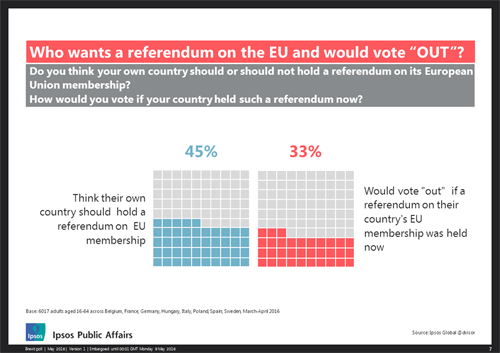 The idea that ‘Brexit’ might start a domino effect with other countries then leaving the EU is shared by around half (48%) of those in the researched EU countries, and is only slightly less prevalent in countries outside the EU (42%). This is a widely held expectation in Hungary, Sweden, Italy and Germany, of the European countries. But in every country more people agree a domino effect is likely than disagree. 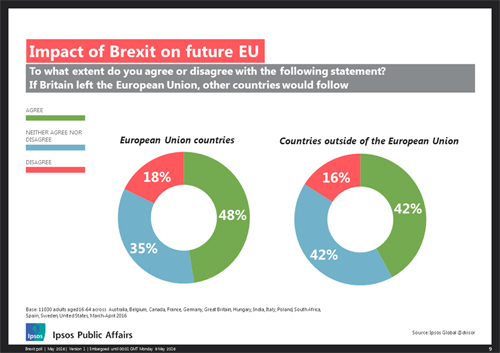 When asked about the potential impact of Brexit on Britain and the EU, people are more likely to think the latter will lose out. Half of Europeans think Brexit would have a negative impact on the EU's economy and for the EU's influence on the world stage (51% and 48% respectively). In comparison, less than two in five think that Brexit would be negative for Britain's economy or position on the world stage (36% and 38% respectively). Indeed, in five countries people think leaving the EU would actually have a net positive impact on Britain’s economy (India, Italy, Poland, South Africa and the United States), although only two out of the 14 countries (India and the US) think it would have a net positive impact on Britain’s influence on world affairs.

Finally, the survey shows that four in ten (40%) across the European countries surveyed think that there will be a reduced EU by 2020 - either with less integration or having been disbanded altogether, although only 11% foresee this more dramatic scenario. Four in ten (43%) want their countries to work towards reducing the scope of the EU to some extent.

However, those who want a more federal Europe are more pessimistic about their prospects. While again four in ten (39%) want their countries to have a long-term policy of either a more integrated Europe or even a single European government (although once more only 15% want this more extreme option), on average only two in ten (21%) think there will be a more federal Europe by 2020. Rather, 39% believe that in 2020 the EU will be the same as today’s version, with the same balance of powers between the EU and individual countries (even though only 18% want their countries to pursue this status quo option). 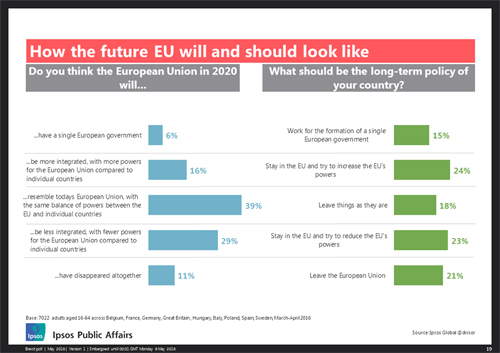 “The opinion polls are indicating a close race as we approach 23 June – but this new study shows Brits are the most convinced of all that Brexit isn’t going to happen. Having heard so much about ‘Project Fear’, and the risks of leaving, it’s interesting to see that internationally, the more common view is that the UK would suffer less than the EU from the break up. For Europeans, this possibly flows from their feelings about their own country’s relationship with the EU – they tend to feel there is likely to be a ripple effect following the UK vote. The Italians in particular hope to have their own opportunity to go to the polls on their EU membership – which lends a sense that even if the vote is to stick with the status quo in June, it will not be the end of the EU’s challenges.”

The study is based on interviews with 11,030 (between 500 and 1005 per country) adults aged 16-64 in Australia, Belgium, Canada, France, Germany, Great Britain, Hungary, India, Italy, Poland, South Africa, Spain, Sweden and the United States. Data are weighted to age, gender, region, and household income based on recent Census and/or population figures for each country. Interviews were conducted via Ipsos Global @dvisor Online Omnibus from March 25 to April 8 2016.