With over 60% of the delegates in Parliament, the ANC should fulfil a strong leading role in the country, but currently more than half (54%) of South Africans are agreeing that “The future of the ANC is uncertain because of the leadership issues within the party”.

This is one of the findings of the Ipsos Pulse of the People™ poll, conducted in May – June this year. 3,619 randomly selected South Africans were interviewed face-to-face in their homes and home languages by trained interviewers. (See full technical detail of the study appended.) This press release discusses the opinions of South Africans of voting age.

The feeling of uncertainty is widespread. As can be expected, larger proportions of supporters of the main opposition parties (the DA and the EFF) agree that the ANC has an uncertain future, but it is interesting to note that over half (52%) of ANC supporters also agree.  Only one in every five South Africans (20%) feel certain about the future of the party. 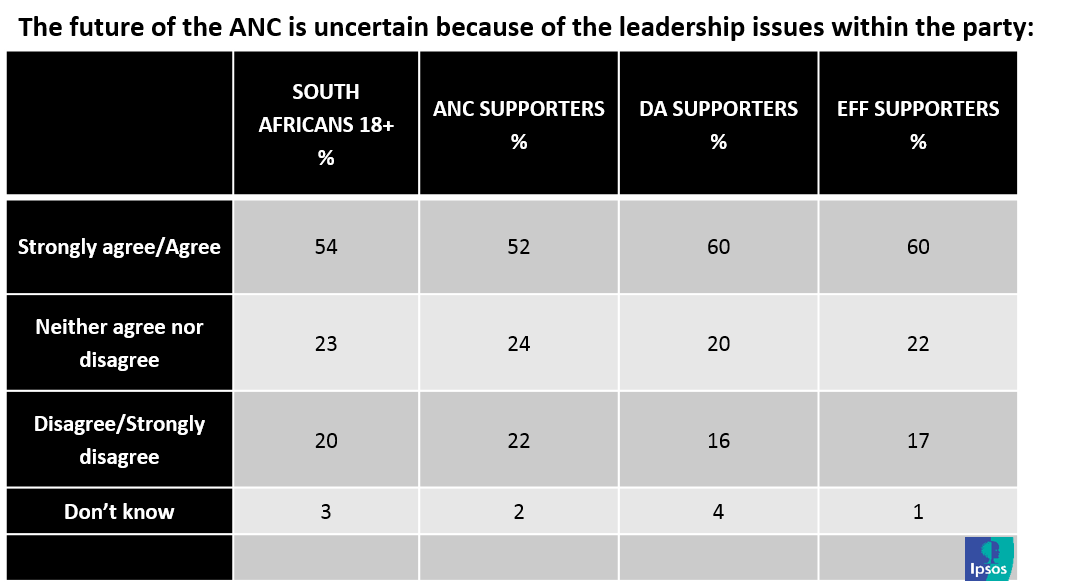 Currently only president Cyril Ramaphosa can possibly change this situation.

In a thought-provoking article, the well-known journalist and commentator Max du Preez[1] says of Ramaphosa: “But I’m beginning to wonder if he’s reading the signs correctly and getting the balance right. He’s been running with the hares and hunting with the foxes…I’m beginning to doubt whether Ramaphosa’s strategy of appeasement of all sides will survive until next year’s election.”  He goes on to criticise Ramaphosa and the ANC for fearing the EFF and urges the president to take the situation firmly in hand “…without pandering to anyone.” The findings of Ipsos’ Leadership Approval Ratings show that South Africans support the notion that he should be more decisive, as appreciation of his role as a political leader has grown over the last few years and currently he enjoys strong support from many quarters.

All respondents, regardless of political opinion, were asked to rate Cyril Ramaphosa (amongst others) as a political leader.  The chart below illustrates his growing support amongst South Africans. During Ramaphosa’s time as Deputy President he consistently outperformed then president Zuma, and since becoming president of South Africa in February 2018, South Africans rate him very highly. This is exceptional against the background of the general uncertainty in the country and the uncertainty expressed about the ANC’s future. 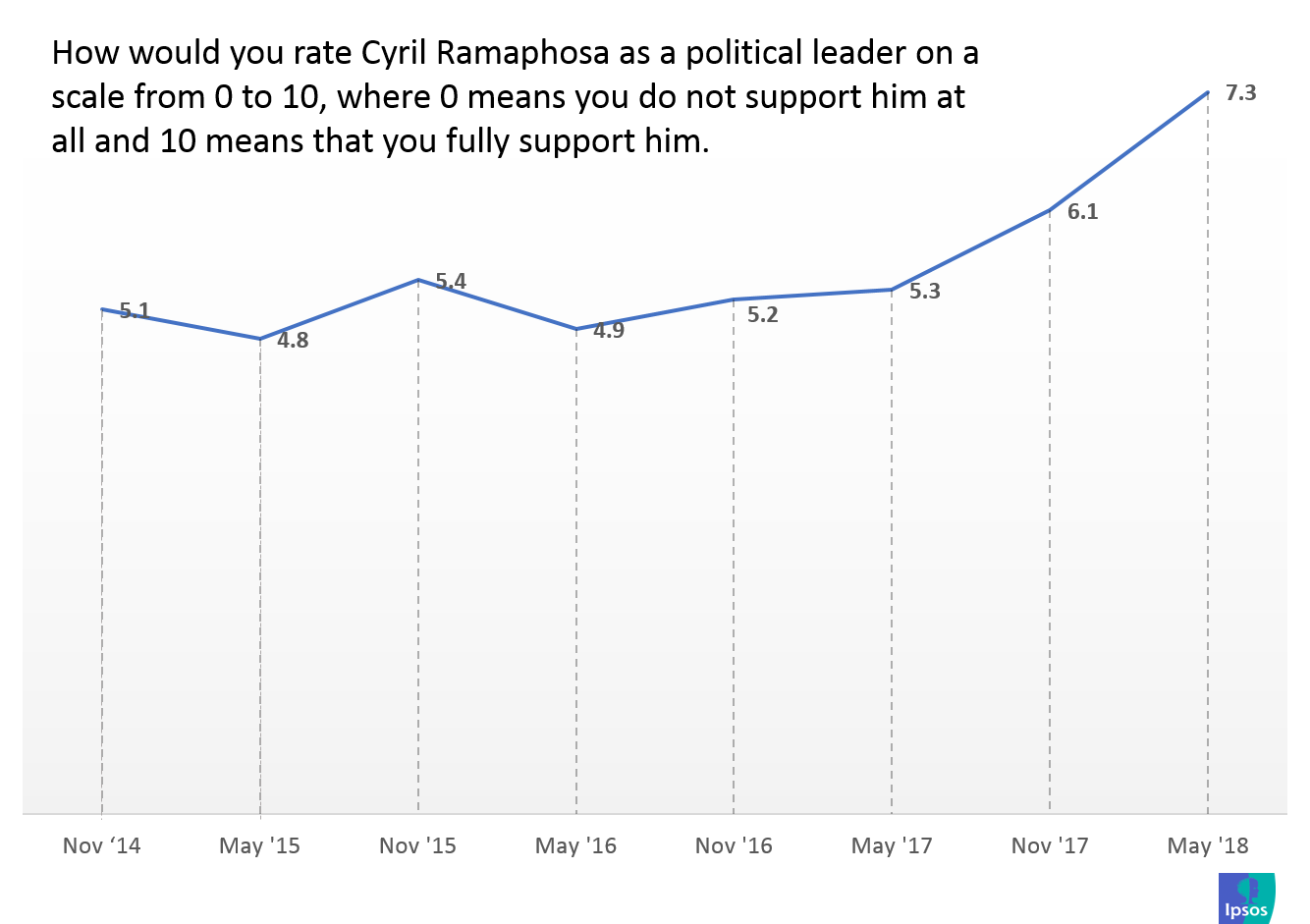 Support for the president comes from the whole country, but slightly less so from the Western and Eastern Cape and KwaZulu-Natal, although he still performs better than all other political leaders in every province. 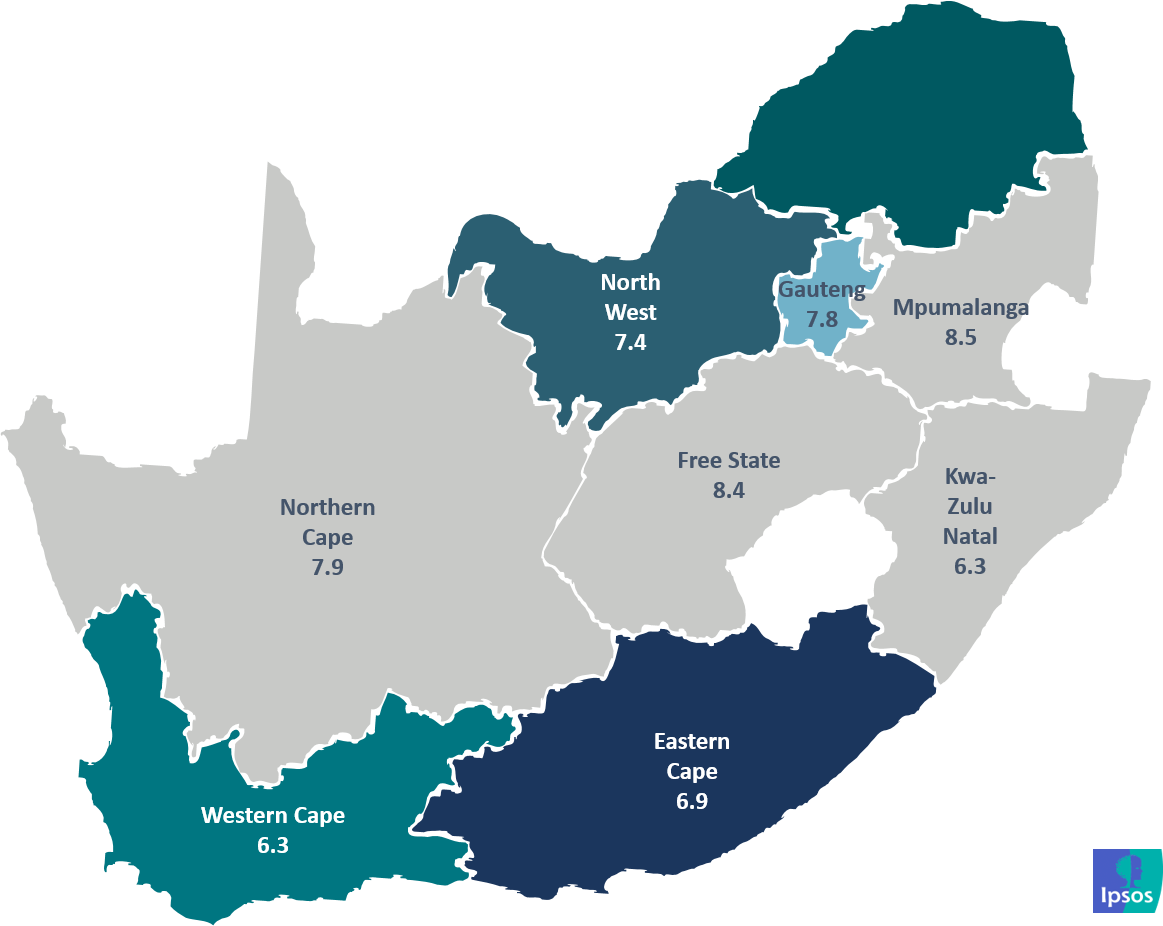 In Mpumalanga, the president scores 8.5 out of 10 while David Mabuza who originates from this province receives a score of 6.1 out of 10.

In the Eastern Cape, the leader performing almost on par with the president is Pravin Gordhan, with a score of 6.5 and in KZN former president Jacob Zuma scores 5.9 as opposed to Ramaphosa’s 6.3. (Support for the previous president in the rest of the country is very low.)

In the Western Cape, the province under DA administration, performance of Mmusi Maimane is closest to Ramaphosa with a score of 5.7 out of 10.

It is natural that both Mmusi Maimane and Julius Malema enjoy strong support from their own parties, but not so from supporters of other political parties.  It is also interesting that women marginally support the ANC leaders more strongly, while men rate the DA’s Mmusi Maimane and EFF’s Julius Malema slightly higher than women do.

In general, the support of women for female politicians is higher than the support of men for female politicians, but not remarkably. In South Africa we still have a very long way to go in terms of gender equality, as almost half of men (49%) and four in every ten women (41%) believe that men make better political leaders than women do, a sobering reflection during Women’s month.

Fieldwork for this study was conducted from 20 April to 7 June 2018.  A total of 3,619 South Africans, 18 years and older, were interviewed. They were randomly selected and interviewed face-to-face in their homes and home languages. Interviews were conducted all over the country, from metropolitan areas to deep rural areas. This methodology ensured that the results are representative of the views of the universe and that findings can be weighted and projected to the universe – i.e. South Africans 18 years and older.

All sample surveys are subject to a margin of error, determined by sample size, sampling methodology and response rate. The sample error for this sample at a 95% confidence level is a maximum of 1.60%.

In conclusion, Ipsos welcomes any discussion about its record as a political pollster in South Africa, and any other jurisdiction where we do polls. Our record in South Africa as an accurate predictor of political outcomes based on our polling is very strong.