London, UK. New research from Ipsos done after Boris Johnson survived a confidence vote on Monday 6th June, shows half of Britons (51%) believe Conservative MPs made the wrong decision by voting to keep him in office. Just over a third believe they made the right decision (36%), increasing to 62% of 2019 Conservative supporters. 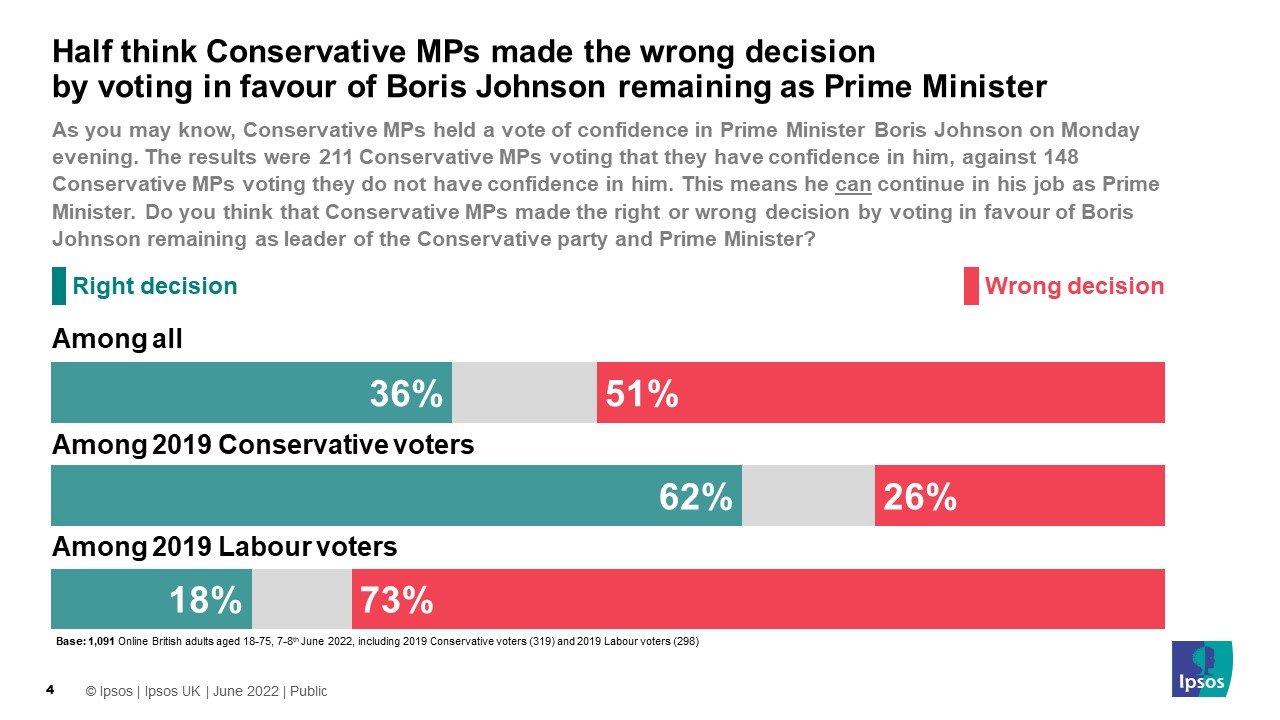 Johnson’s future and what’s next?

While the Prime Minister might be able to continue in his position for now, the public think the future is uncertain. Over 4 in 10 (43%) say the result of the confidence vote was a bad result for Boris Johnson (33% said it was a good result) and few expect him to lead his party into the next election. More than half (55%) say he is unlikely to still be Prime Minister at the next General Election. Opinion is split as to whether he will still hold his position by the end of the year, 48% say it is likely while 42% disagree. In the short-term his position appears more stable with 66% saying he is likely to still be Prime Minister in 3 months’ time, only a quarter disagree (26%).

Considering next moves for the Prime Minister, the public have low levels of faith in what he will be able to achieve. Around 6 in 10 say it is unlikely he will be able to win the next General Election (59%) or unite the Conservative party under his leadership (64%). Two-thirds (67%) say he is unlikely to improve public trust in him as Prime Minister. 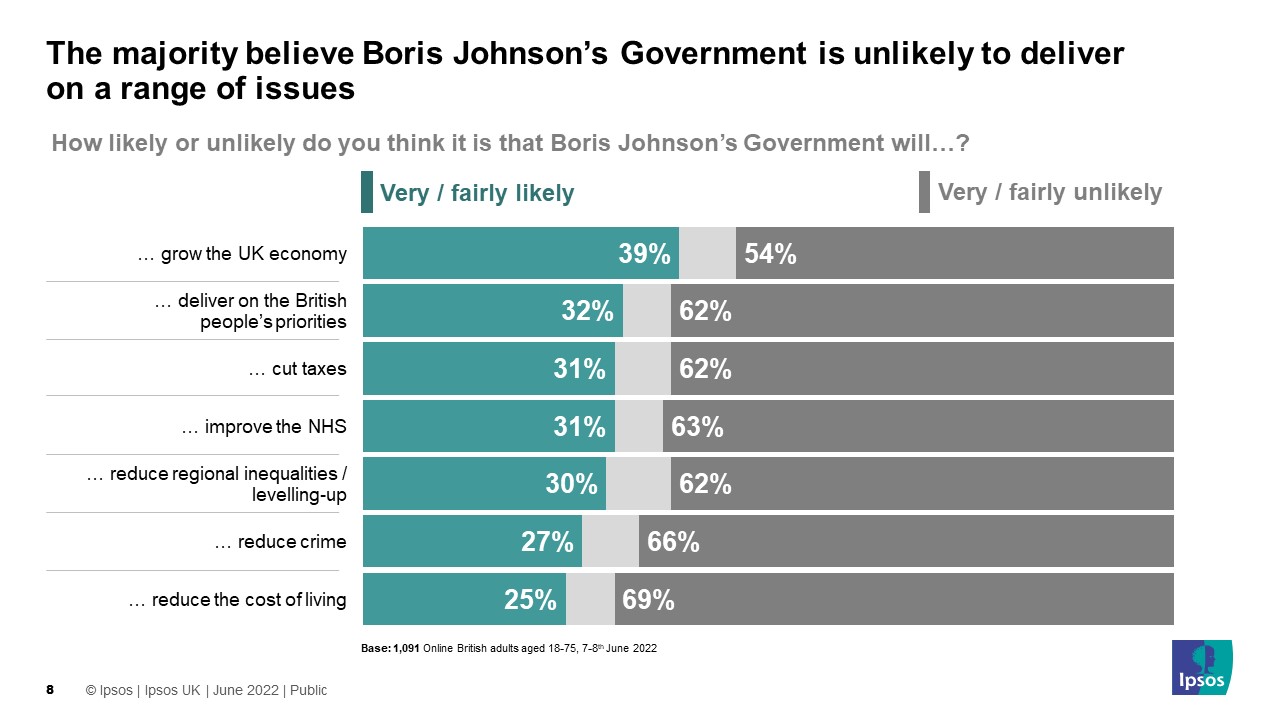 Who are the alternatives?

A key question following the confidence vote is who else might take over? Currently, Britons remain unsure. Keir Starmer is slightly ahead of 10 Conservative options when asked who would do a good or bad job as PM. A third (32%) believe the current Labour leader would do a good job compared to 35% who disagree. 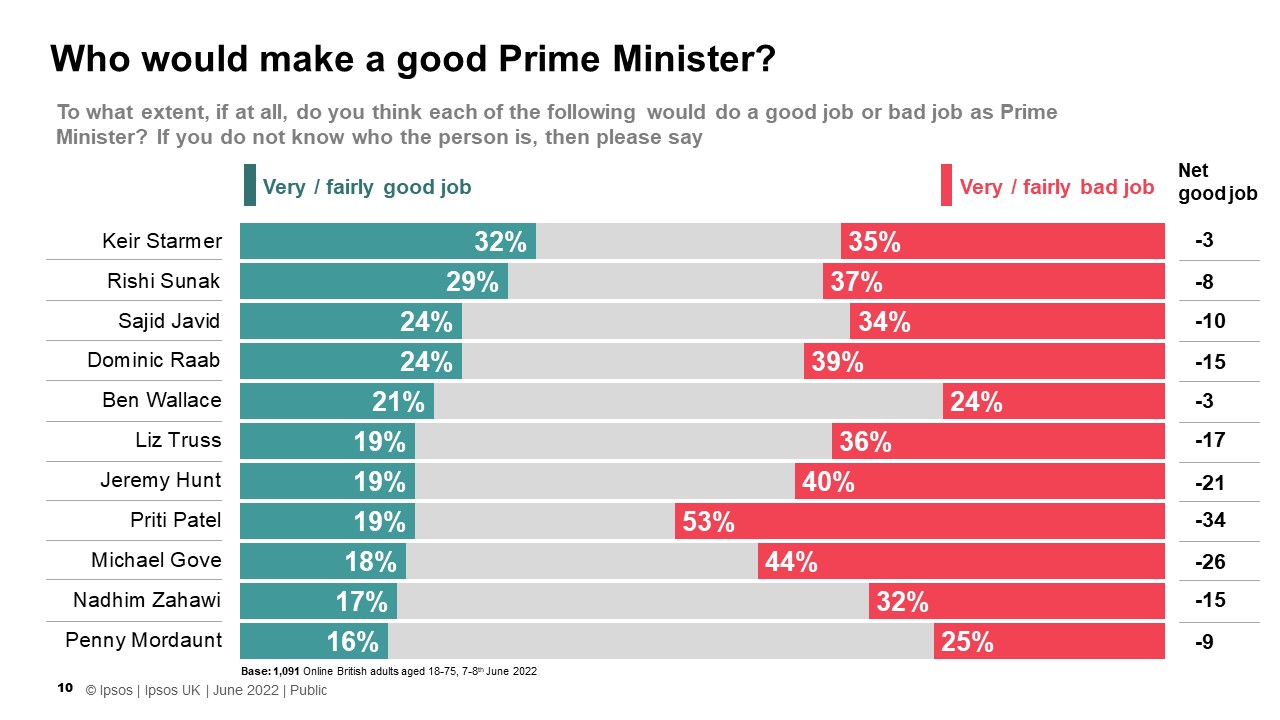 Meanwhile, when we look at the numbers by those that have an opinion (ie by removing those that say they don’t know if the person would do a good or bad job or they don’t know who they are), a slightly different picture emerges.  Keir Starmer still tops the list but Defence Secretary Ben Wallace essentially ties for first place with Rishi Sunak in terms of which Conservative the more informed public think would do a good job. 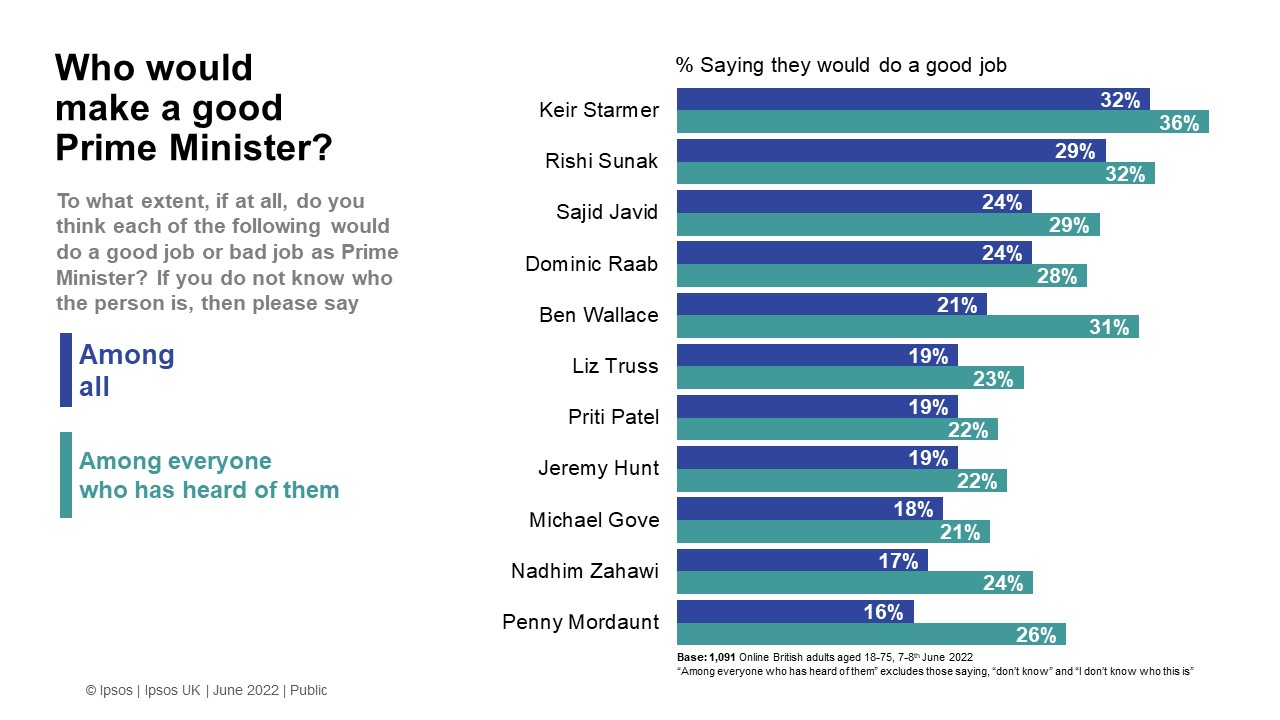 Boris Johnson may be encouraged that the proportion of Britons that want him to resign has fallen slightly after a rise at the end of May but that is where the positive news ends for the Prime Minister in this data. The public tend to think Conservative MPs made a mistake retaining him as leader and there is little confidence amongst the public that he will improve things in the country or still be Prime Minister at the next General Election. That being said, there is still no obvious public consensus as to who should replace him, which may provide him with the political breathing room to recover, if he can.

Ipsos UK interviewed a representative quota sample of 1,091 adults aged 18-75 in Great Britain. Interviews took place on the online Omnibus using the Ipsos.Digital platform between 7th and 8th June 2022. Data has been weighted to the known offline population proportions.