Britons do not have a positive outlook when it comes to Brexit’s effect on food prices, 6 in 10 (61%) say Britain’s exit of the EU will make food prices more expensive. A quarter believe it will make little difference to the price of food, while only 5% think they will become cheaper.

Only 13% of Britons expect more migrants to come to the UK from EU countries because of Brexit, half believe the number of people moving here will decrease. Around a quarter (27%) believe Brexit will make little difference. 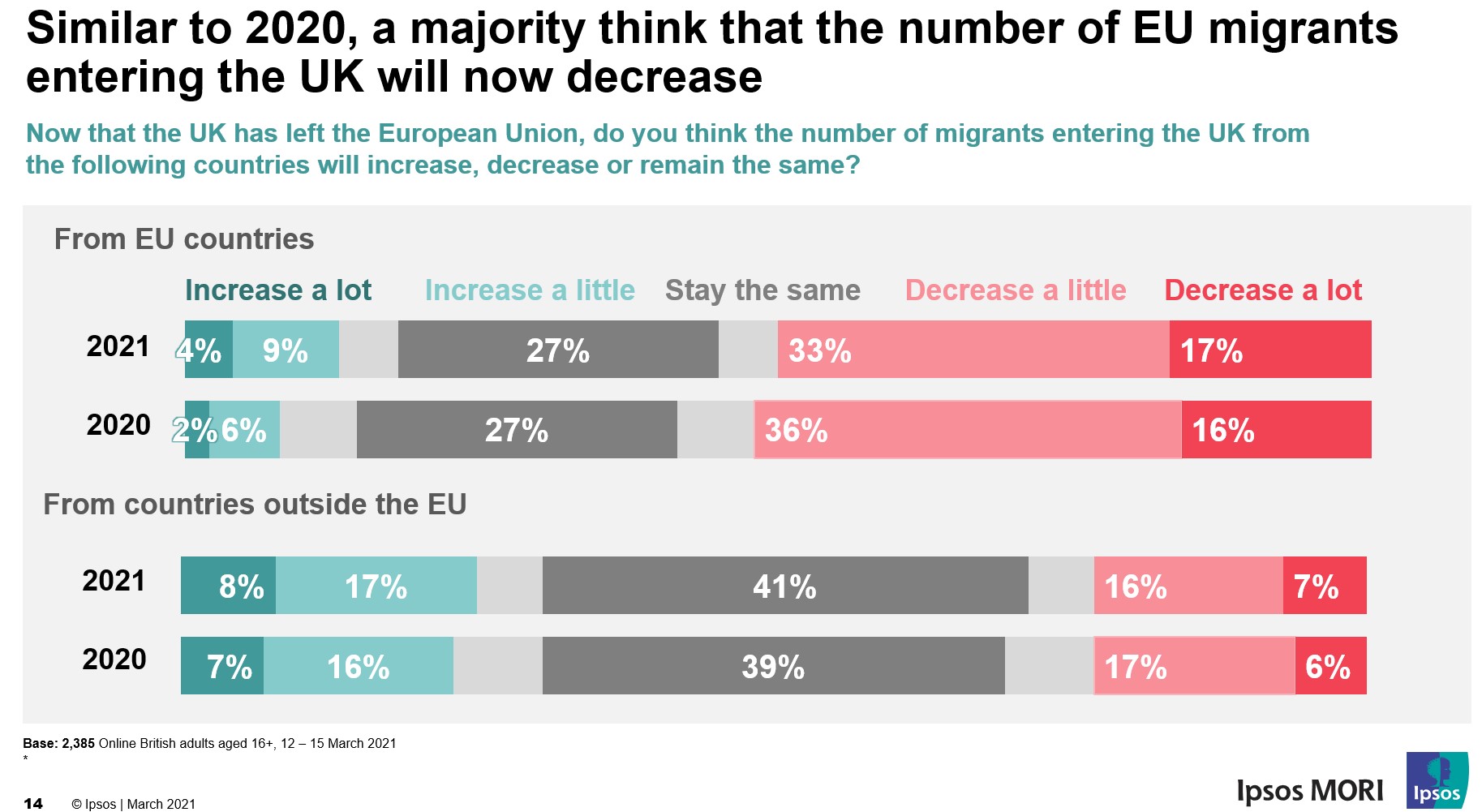 Opinion is split when considering the effect Brexit will have on migrants from countries outside the EU. A quarter say the number of people coming from these countries will increase while 27% believe the number will fall. Most people believe there will be no difference (41%).

Over half of Britons expect Brexit to make it harder to go on holiday within the EU (55%), only 4% expect holidays to countries closes to them to get easier while a third (32%) say there will be no difference.

Considering holidays outside of the EU, 15% say they are more likely to consider a holiday further afield as a result of Brexit while 1 in 10 (11%) say they are now less likely to do so. Two-thirds say Brexit will make little difference when choosing which country to visit on holiday.

Impact on sectors of the British economy

According to Britons, the sector most likely to be negatively affected by Brexit is transportation and haulage, 6 in 10 (58%) believe Brexit will have a negative impact on this sector while only 14% believe effects will be positive. 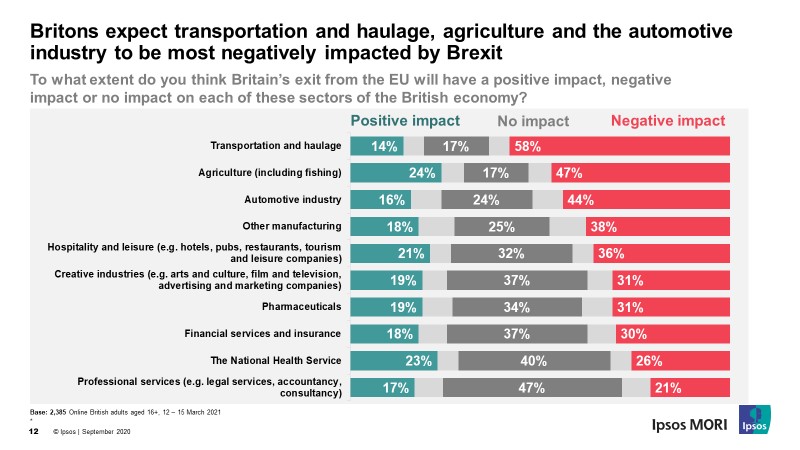 Professional services (e.g. law and accountancy), the NHS and financial services and insurance are expected by most to see no impact as a result of Brexit (47%, 40% and 37% respectively).

Would we rejoin the EU?

Despite relatively negative expectations for the future as a result of Brexit, opinion remains largely split as to whether Britons would like to rejoin the EU in the next 10 years. Just over two-thirds (35%) would like to see Britain join the EU again in the next decade while a similar proportion disagree (37%). 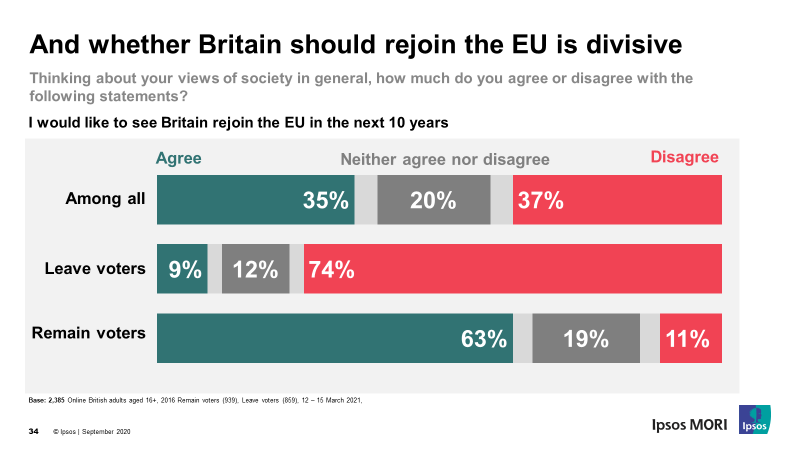 Unsurprisingly, a majority of those who voted to remain in 2016 agree that they would like to rejoin the EU in the next 10 years (63%) while three-quarters of leave voters disagree (74%). Around one in ten (9%) leave voters would like to see Britain become a member of the EU again while a similar proportion of remain voters want to stay out (11%).

When it comes to relationships, Europe is still seen as the most important to the UK (30%) compared to the Commonwealth (26%) and the US (18%). However, this has fallen significantly since last asked in September 2020 (41%) with the importance of the Commonwealth growing, from 20% in 2020 to 26% now. 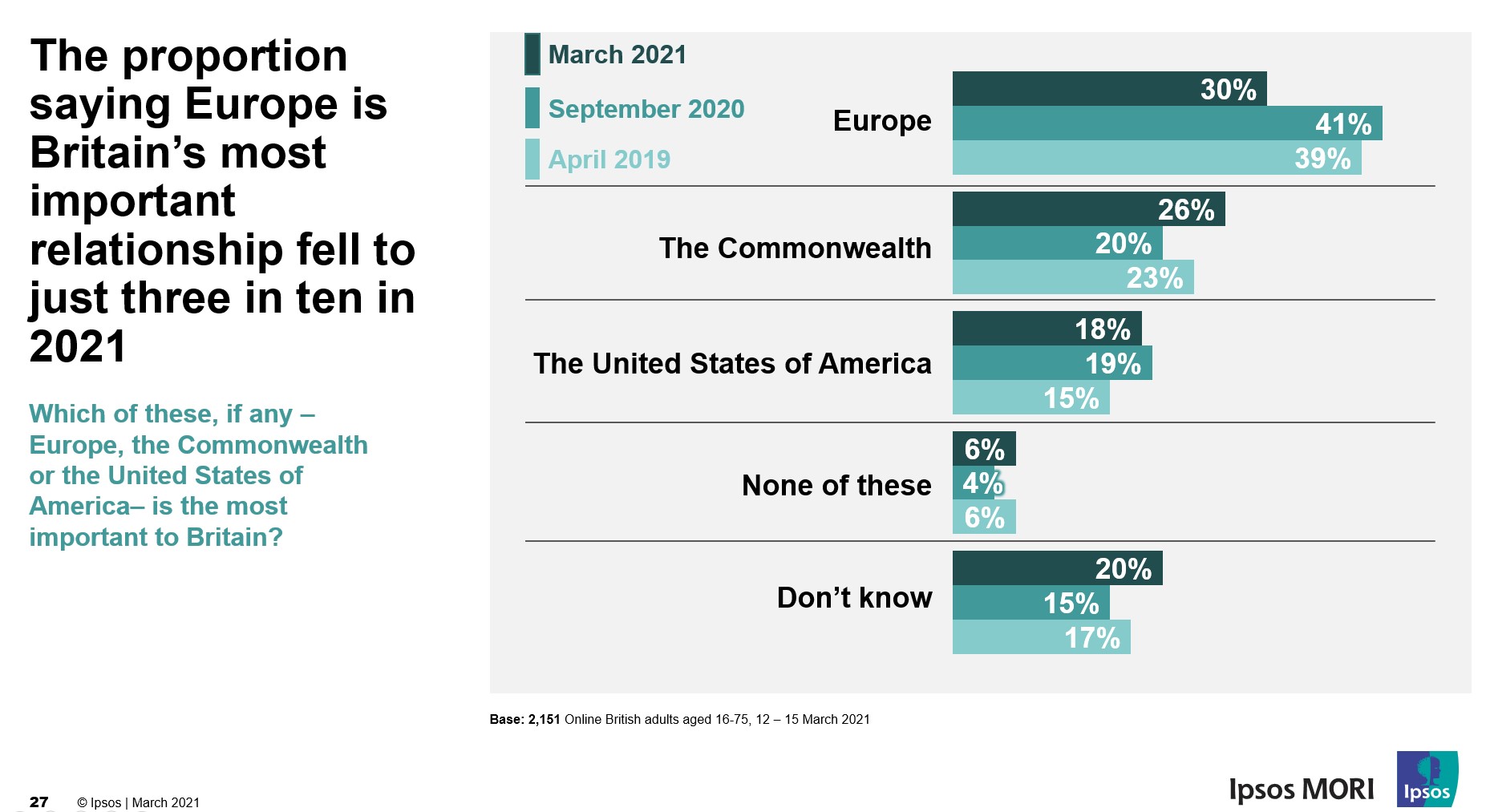 Over the next five to ten years, Britons expect the EU-UK relationship to negatively impact Britain’s economy (41% compared to 29% who believe it will have a positive effect) and their own lives (26%), 17% expect it to affect them positively. Opinion is split when considering the impact the relationship will have on British society and Britain’s defence and security. Almost 3 in 10 (27%) say it will have a positive effect on British society over the next 5-10 years, the same proportion believe the impact will be negative. Similarly, a quarter (25%) say Britain’s defence and security will be positively impacted while 27% believe it will have the opposite effect.

We have seen from other Ipsos polling that The Government’s current vaccine success has provided a halo effect when it comes to our relationship with the EU, but this latest data illustrates that Britons still have significant concerns about life after Brexit.  More people think they will be negatively impacted than positively, including concerns about rising food prices, summer holidays to countries in the EU, and haulage and automotive industries. Interestingly, despite these concerns, there is still no majority wanting to rejoin the EU.
When it comes to migration, one of the lynchpins of the Brexit campaign, the public expect to see a fall in the number of people migrating to the UK from EU countries.   Which, if proves to be correct, could have significant implications for the country.  What is clear is that we remain divided over Brexit, with neither a strong desire to re-join our EU neighbours nor to maintain our new-found freedom.