When it comes to parenting, however, traditional views are more prevalent.  A majority across the 22 countries think that it is better for parents of children to be married rather than unmarried (57%), and even more strongly that parents today do not take enough responsibility for the behaviour of their children (77%).   The research also shows clear differences of opinion between emerging vs established economies, between men and women, and most notably, between those with religious faith and those without.

Across 22 countries in only three do most think the role of women is to be good mothers and wives – Indonesia (76%), Russia (69%) and India (64%).  More liberal views are clearly in the majority in most established economies (although less so in Germany and the US), but in four Western European countries there have been significant increases in agreement with the more traditional view: in Germany (up ten points since 2014 to 41%), France (up eight to 24%), Spain (up seven to 19%) and Sweden (up eight to 17%).  There have also been significant increases in India (up seven points to 64%), and in Turkey (up 11 points to 47%).

Men are more likely than women to think women should be wives and mothers (by 41% to 34%, on average), but there is an even greater divide by religious belief.  Those with religious beliefs are almost twice as likely to side with the traditional view on gender roles than those who describe themselves as agnostic or atheist (by 42% to 24%). 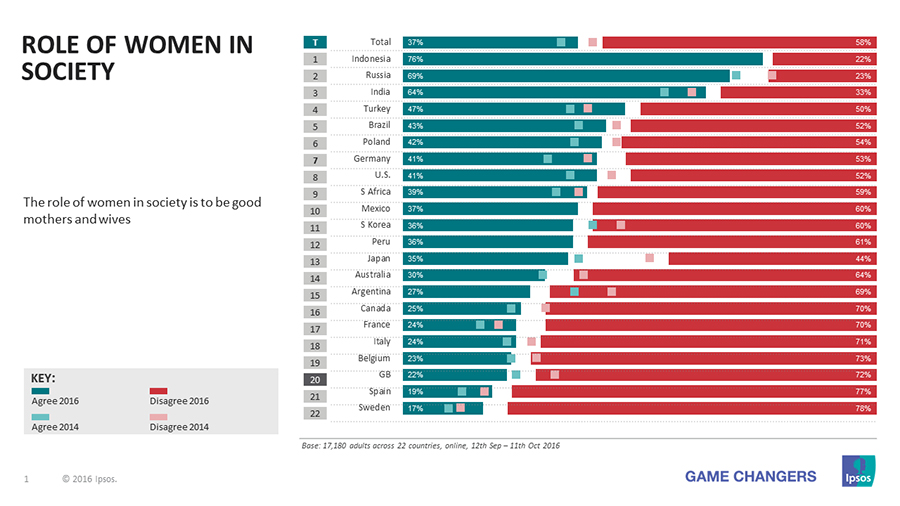 On average 69% of people across the 22 countries think that men now have greater responsibility for the home and childcare than ever before (but falling to less than half in Russia and Poland).  A majority of both genders agree, although men are more likely to think they are taking up the burden than women, by 73% to 64%! 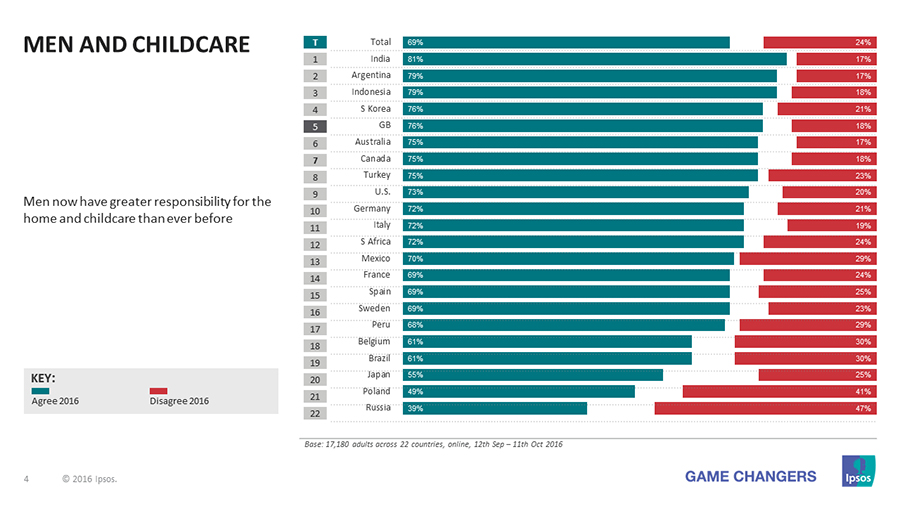 When it comes to having children, traditional views on the family are more widespread.  On average, almost six in ten (57%) believe that it is better for parents of children to be married than unmarried, while three in ten (31%) disagree.  While a majority agree in 14 out of the 22 countries, there is actually a lot of variation on this question.  While over seven in ten prefer marriage in Indonesia, India, Turkey, Russia, South Africa, South Korea and the US, in four European countries the balance of opinion is the other way around (in Spain, Belgium, France, and Sweden, where people disagree it is better to be married if you are having children).

Again, those with religious faith are more likely to believe in the importance of marriage than non-believers (by 62% to 42%), as are men than women (by 61% to 52%).  Perhaps unsurprisingly, there is also a difference by marital status.  Two in three (67%) of those who are married agree that it is better for parents to be married, against 38% of those living as married or in domestic partnerships, and 45% of people who are divorced. 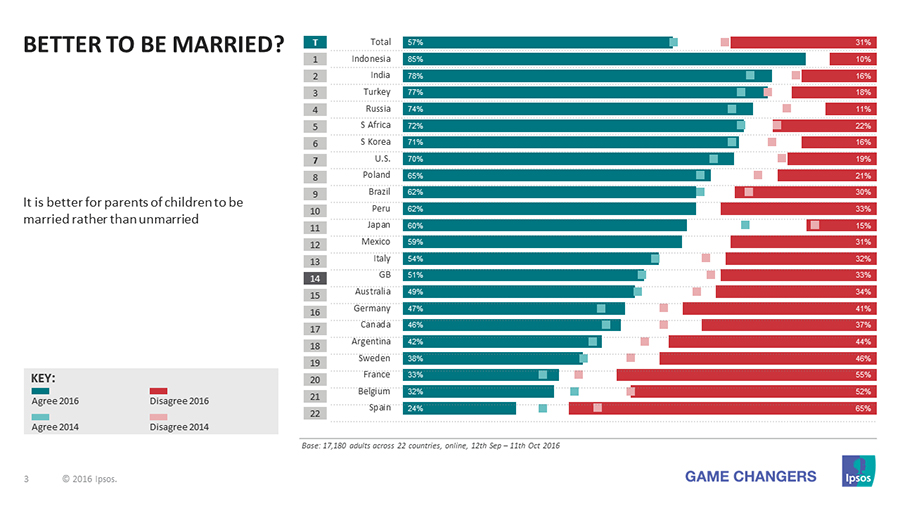 One thing the world does agree on is that parents today do not take enough responsibility for the behaviour of their children, at 77% (just 18% disagree).  This sentiment is shared by a clear majority in every country, but especially South Africa (89%), the United States (87%) and Great Britain (85%). 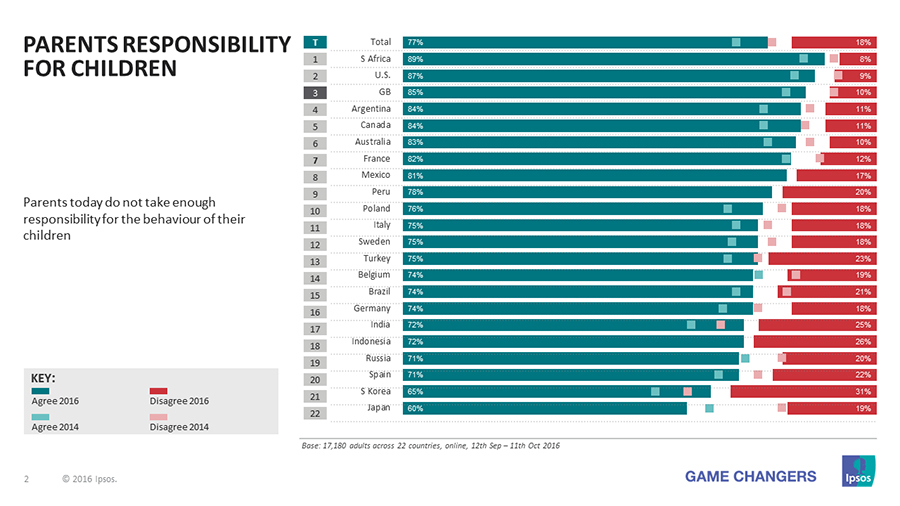 The world remains divided over the role of women, but the majority do NOT think women should stay at home and have children - although globally there is a clear difference in the views between those with religious faith and non-believers. Most people still think marriage matters if you are having children (but much less so in western Europe), but one thing it seems that does unite people around the world is a feeling that parents need to take more responsibility for the behaviour of their children – by which most mean I think, that “other” people should take more responsibility for “their” children

The results are weighted to ensure that the sample’s composition reflects that of the adult population according to the most recent country census data, and to provide results intended to approximate the sample universe.  Total global data have not been weighted by population size, but are simply a country average.

Where results do not sum to 100, this may be due to computer rounding, multiple responses, or the exclusion of don’t knows or not stated responses. All sample surveys and polls may be subject to other sources of error, including, but not limited to coverage error, and measurement error.