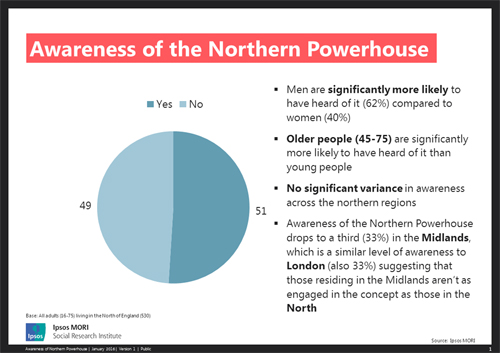 82% of respondents stated that ‘investing in training to develop skills of the local workforce’ and ‘transport infrastructure investment within the North’ were the two most important priorities when compared with the other possibilities. ‘Investing in training to develop the skills of the local workforce’ was seen as equally important amongst those currently in employment and those searching for employment, which emphasises its importance for both the active and non-active workforce. 7 in 10 respondents thought investment in transport links between London and the North is important, indicating that local people would prioritise investment between northern cities before further investment between the north and south.

Around three quarters thought that ‘local control over setting business rates’ (75%), ‘attracting foreign investment, which will bring new money to the North’ (74%) and ‘local autonomy over planning policy/decisions, which could give local areas more control over undeveloped land’ (76%) are also important.

Awareness of the Northern Powerhouse is about 50:50 (51% yes, 49% no) and there was a correlation between awareness and positivity. There was no significant variance in awareness across the northern regions.

Ipsos surveyed a representative sample of 529 adults aged 16+ across the North of England. Surveys were conducted online between 8th and 12th January 2016. Data is weighted to match the profile of the population.