The latest polling from Ipsos shows that tax pledges from each party were welcomed by the British public, but with the rise in personal allowances the stand-out favourite. More than eight in ten (85%) support increasing the threshold before people pay income tax to £12,500 per year, while just nine percent oppose it. The Liberal Democrats have retained most of the credit for the rise in personal allowances in the current Parliament – though an increased number are unsure who should get credit. Four in ten (41%) think the Liberal Democrats deserve credit for the rise in the threshold before people pay income tax from £6,475 in 2010 to £10,000 this year, while 26% credit the Conservatives and 28% say they ‘don’t know’. Both the Liberal Democrats and Conservatives are credited by fewer Britons than in March of this year, when 45% said the Liberal Democrats deserve most credit and 33% credited the Conservatives; the number who don’t know is now up ten points, from 18% in March. 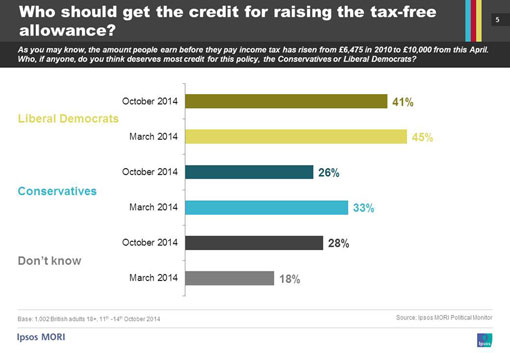 Around six in ten each support the other main tax pledges trumpeted over conference season; 64% support increasing the 40% tax rate threshold to £50,000 per year (22% oppose it), 63% support a mansion tax on homes worth more than two million pounds (26% oppose) and 61% back increasing the top rate of tax to 50% (30% oppose). 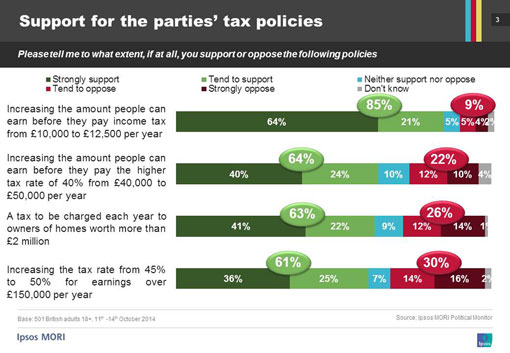 Some policies were less popular when connected with the party proposing them: 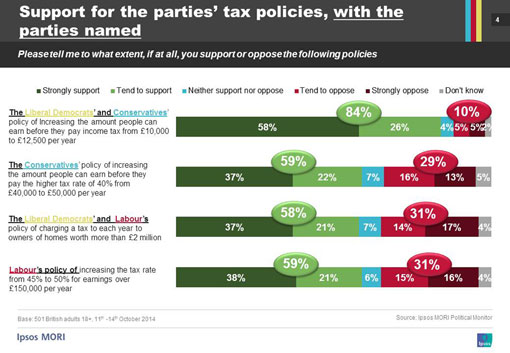 “All three main party leaders will be pleased that their conference season policies have been welcomed by the public. It is particularly good news for David Cameron and Nick Clegg, with their pledge on personal allowances the most popular of all - though the fact that the Liberal Democrats have taken credit for this parliament’s rise in personal allowances may be a cause for concern for the Prime Minister.

Technical note: Ipsos interviewed a representative sample of 1,002 adults aged 18+ across Great Britain. Interviews were conducted by telephone 11th – 14th October 2014.  Data are weighted to match the profile of the population.