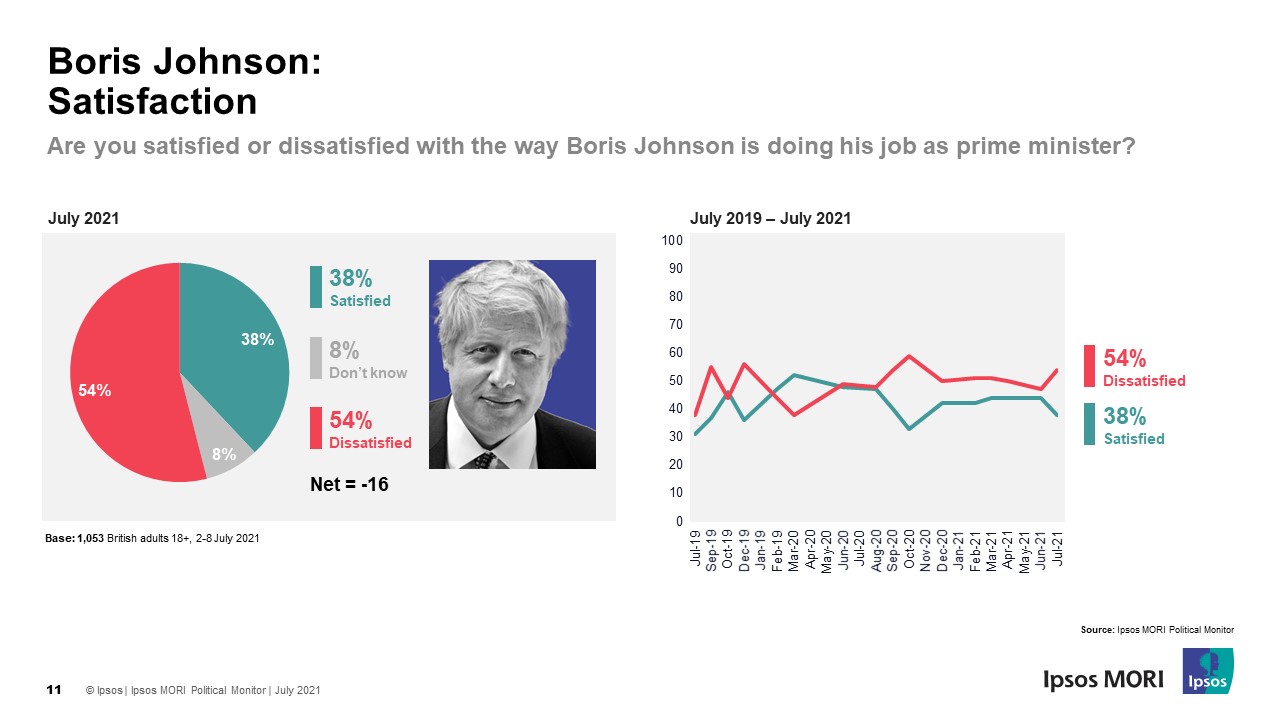 Falling satisfaction with Johnson and his government overall is coupled with the government’s ratings for handling coronavirus falling. 41% of Britons think the government is handling the pandemic well (down 3 points from June) and 43% say badly (+5 points). This means the government’s net satisfaction rating on this measure has fallen from +6 to -2 since June. Meanwhile, economic optimism has fallen somewhat too. 47% think the economy will improve in the next 12 months (down 6 points from June) and 36% think it will worsen. This means net economic optimism falls to +11 this month compared with +22 in June. However, it is still net positive. It was last negative in February.

However, despite falling satisfaction with Johnson and his government, the Conservatives retain a 9-point lead over Labour in terms of voting intention. The Conservatives are on 40% (down 4 points from June) and Labour are on 31% (also down 4 points). In contrast, the Lib Dems rise to 13% (up 7 points from June), the highest voting intention score achieved with Ipsos since the 2019 General Election.

It will concern Johnson and his government that current public satisfaction scores are the lowest they have been since last October, although the Conservatives will be happy that they are still comfortably ahead of Labour in terms of voter preference. However, it is less clear where we will be come party conference season. We should expect what happens when final Covid restrictions are eased, and how that is managed this summer, to play a significant role in where public opinion stands this autumn.

Ipsos interviewed a representative sample of 1,053 adults aged 18+ across Great Britain. Interviews were conducted by telephone: 2nd July to 8th July 2021. Data are weighted to match the profile of the population. All polls are subject to a wide range of potential sources of error.