As May’s Scottish Parliament election looms large, our new poll for STV News suggests that the SNP remains on course for victory with the party still significantly ahead.

Among those likely to vote, 53% would cast their constituency vote for the SNP (up three points from November 2015), while 20% would vote for Scottish Labour (no change). Support for the Scottish Conservatives has fallen by two points to 16% with the Scottish Liberal Democrats on 6% (down one point). 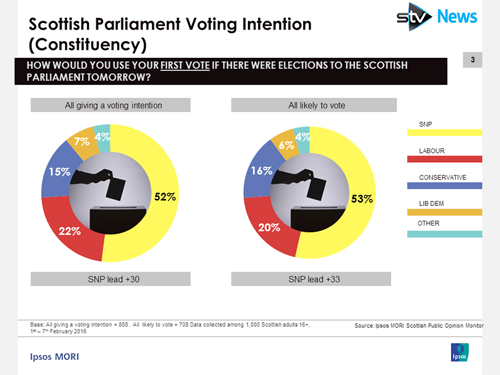 Public opinion also remains relatively unchanged in relation to the regional list vote in the forthcoming election. Just under half (49%) said that they would cast their regional vote for the SNP (up three points from November), while Labour remain on 19%. The Scottish Conservatives stand at 15% (down one point) while the Scottish Liberal Democrats remain at 8% and the Scottish Greens drop one point to 6%.

It is possible that the referendum on Britain’s membership of the European Union (EU) will closely follow the Holyrood elections. The poll shows that Scots are strongly in favour of remaining in the EU (62% would vote to remain versus 26% who would vote to leave and 12% who are not sure) with the gap in opinion still wider than it is across Britain as a whole. 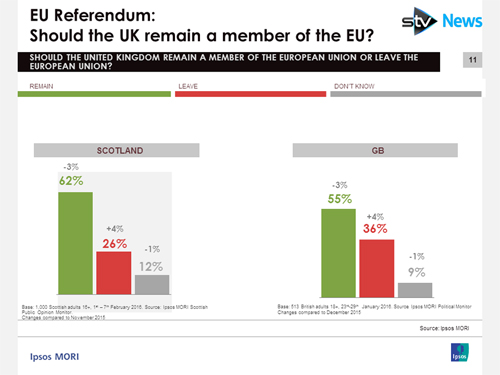 A vote for Britain to leave the EU against the wishes of the majority of Scots is seen as a possible trigger for a second independence referendum. The poll suggests that if this were to happen then opinion would be more in favour of Scotland becoming independent than it is now. Over half (54%) said they would vote ‘Yes’ in a second independence referendum if Britain voted to leave the EU when voters in Scotland voted to remain, compared to 39% who would vote ‘No’ and 7% who were unsure. 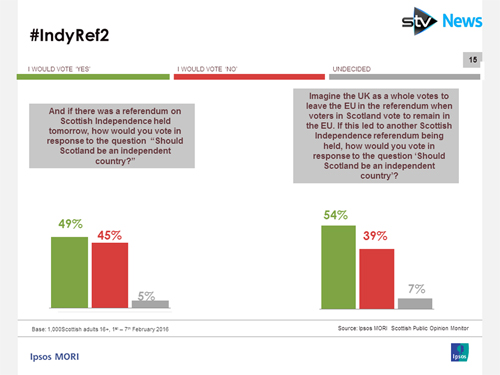 ‘Our latest STV poll confirms the strong position of the SNP. By this time in the run up to the 2011 Holyrood election we saw signs of shift in support from Labour to the SNP; there are no signs of a shift back in that support this time. The most striking finding from the poll is the potential support for independence in the event of a second referendum being called if Britain exits the EU against the will of the majority of voters in Scotland. There is a lot to play before that scenario materialises but it does highlight what is potentially at stake in the forthcoming EU vote.’