What makes people happy in the age of COVID-19?

An Ipsos global survey run at the end of 2021, prior to the current war in Ukraine and at the beginning of the cost of living crisis, found that happiness amongst Britons had returned to pre-COVID levels, with 83% of people reporting to be very or rather happy (82% in 2019, prior to the pandemic). This is considerably higher than the global average of 67%, across 30 countries.  Happiness is most prevalent in the Netherlands and Australia, with 86% and 85% respectively describing themselves as “very” or “rather” happy. China and Great Britain (both 83%), India (82%), France and Saudi Arabia (both 81%), and Canada (80%) follow.

Where are people happier? 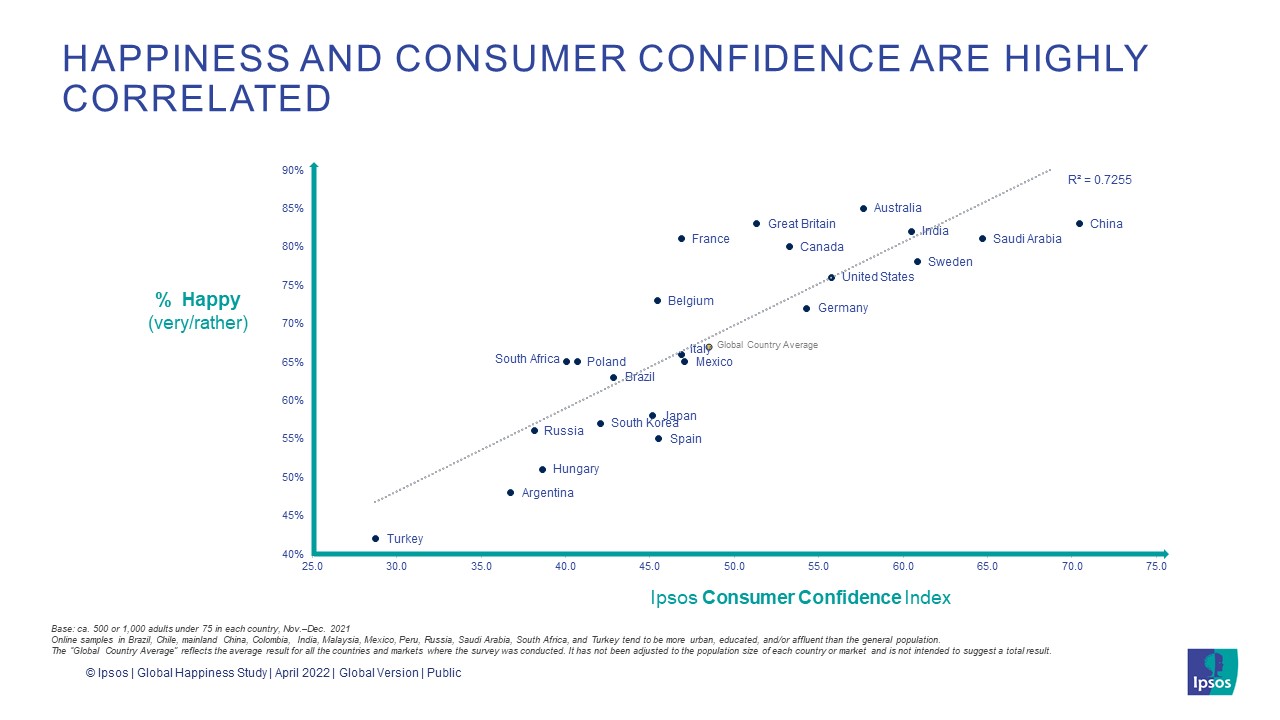 The samples in Argentina, Australia, Belgium, Canada, France, Germany, Great Britain, Hungary, Italy, Japan, the Netherlands, Poland, South Korea, Spain, Sweden, Switzerland, and the United States can be taken as representative of these countries’ general adult population under the age of 75.
The samples in Brazil, Chile, China (mainland), Colombia, India, Malaysia, Mexico, Peru, Romania, Russia, Saudi Arabia, Singapore, South Africa, and Turkey are more urban, more educated, and/or more affluent than the general population. The survey results for these markets should be viewed as reflecting the views of the more “connected” segment of their population.
Prior fieldwork waves were also conducted on Ipsos’s Global Advisor online survey platform. The Aug 2020 wave was conducted Jul 24 – Aug 7, 2020, among 19,516 adults in 27 countries. The June 2019 wave was conducted May 24 - Jun 7, 2019, among 20,327 adults in 28 countries. The February 2018 wave was conducted Jan 26 - Feb 9, 2018, among 19,428 adults in 27 countries. The March 2017 wave was conducted Feb 17 - Mar 3, 2017, among 18,523 adults in 26 countries. The May 2013 wave was conducted May 7 - 21, 2013, among 18,513 adults in 25 countries. The Dec 2011 wave was conducted Dec 6 - 19, 2011, among 21,245 adults in 24 countries.
The data is weighted so that each market’s sample composition best reflects the demographic profile of the adult population according to the most recent census data.
The Global average reflects the average result of all the countries and markets where the survey was conducted that year. It has not been adjusted to the population size of each country or market and is not intended to suggest a total result.
Where results do not sum to 100 or the ‘difference’ appears to be +/-1 more/less than the actual, this may be due to rounding, multiple responses, or the exclusion of don't knows or not stated responses.
The precision of Ipsos online polls is calculated using a credibility interval with a poll of 1,000 accurate to +/- 3.5 percentage points and of 500 accurate to +/- 4.8 percentage points. For more information on Ipsos' use of credibility intervals, please visit the Ipsos website.
The publication of these findings abides by local rules and regulations.