A new survey by Ipsos conducted online among British adults aged 18-75 on 11-14 May finds that:

Post Brexit we saw attitudes towards immigration getting more positive.  This remains the case where views on the impact that immigration has had on Britain remain stable (46% say the impact has been positive, 18% say it is neutral while 33% say it has been negative).

One in ten people (10%) say they are satisfied with the way the current government is dealing with immigration compared with three in five (60%) who are dissatisfied.  While satisfaction levels remain stable, levels of dissatisfaction appear to have increased since March of this year - up to 60% from 53%.  Theresa May’s government has slipped back to the ratings seen under David Cameron’s premiership. Conservative supporters in particular have become more dissatisfied – from 40% in February to 53% now.

One in five people (20%) say they have become more positive about the impact immigration has had on Britain since Britain voted to leave the EU, a quarter disagree (25%) whereas close to half (45%) neither agree nor disagree.  Those aged 18-24 years are most likely to agree (25%) and Labour supporters are more likely to agree than Conservative supporters (27% vs 16%).  There is little difference by those who voted Leave (21% agree) vs Remain (22% agree).

Among those who say they have become more positive, people are divided over the reasons for this. Two in five (39%) say it is because discussions since the vote have highlighted the contribution immigrants make to the UK so they feel less worried.   And when we combine the scores for those who have become more positive because they feel more reassured that numbers of immigrants have or will come down, the figure is similar (41%).  (Just over a quarter (27%) say it’s because they now feel reassured that fewer immigrants will come to the UK one it actually leaves the EU and one in five (19%) say it’s because since the leave vote there are fewer immigrants coming to the UK already so they are now less worried). 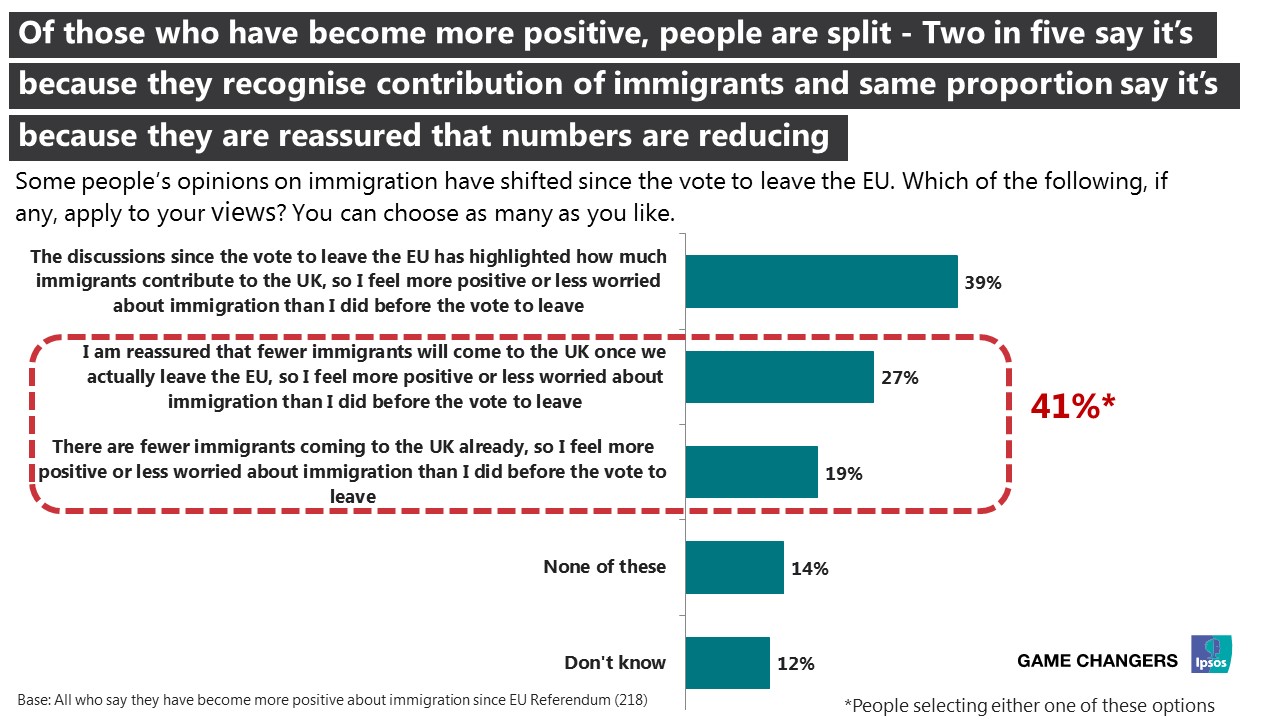 Six in ten (60%) people support an immigration policy that is designed to make it as difficult as possible for people who do not have the right to be in the UK to stay here, referred to as ‘hostile environment’ including measures such as ID checks to access public services.  One in five (18%) oppose this type of policy. Support rises to seven in ten (72%) among 55-75 year olds and to eight in ten among Conservative supporters (80%) and Leavers (81%).

When asked to choose between their priorities – the majority of people (64%) want to ensure that people who have the right to be here are not wrongly forced to leave, even if this means that some illegal immigrants are not deported.  A quarter, however, (23%) prioritise deporting those who do not have the legal right to be here or one, even if some people who cannot prove they have the right to live here are deported.   This latter priority enjoys slightly higher support among Conservative supporters (31%) and Leavers (35%) although this is still a minority. 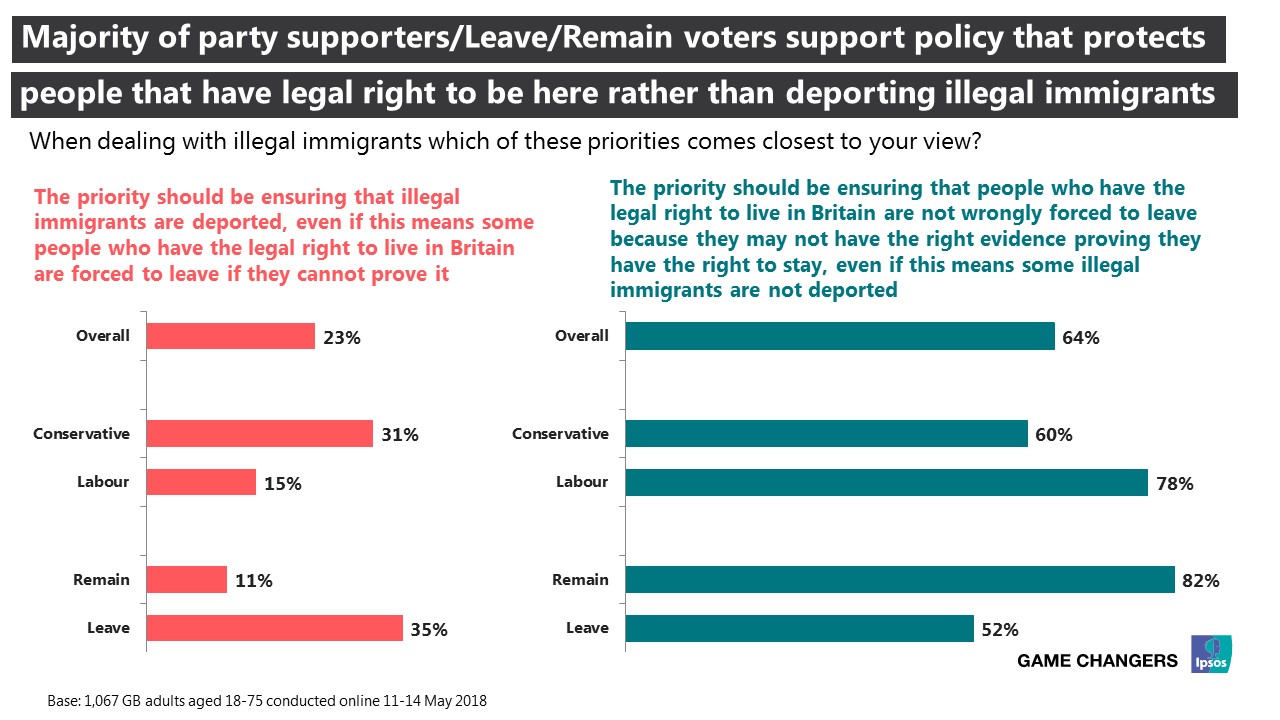 Windrush scandal down to Government incompetence

The majority of the public (61%) agrees that the Windrush scandal is mainly a result of government incompetence rather than the rules on immigration compared with just over one in ten (12%) who disagree.  Levels of agreement are fairly similar among Leavers (65%) and Remainers (63%) but higher among Labour supporters (70%) than Conservative supporters (59%).

Two in five people (43%) agree that the experiences of people caught up in the Windrush scandal show that the British government is being too hostile towards immigrants.  A quarter (24%) disagree and a similar proportion neither agree nor disagree (23%).  Labour supporters (65%) and Remainers (61%) are much more likely to agree the government is hostile towards immigrants than Conservative supporters (28%) and Leavers (26%).

Two in five people (43%) do not think that the issues experienced by those caught up in the Windrush scandal are an unfortunate side effect of controlling illegal immigration.  However, a quarter of people (24%) agree that it is. 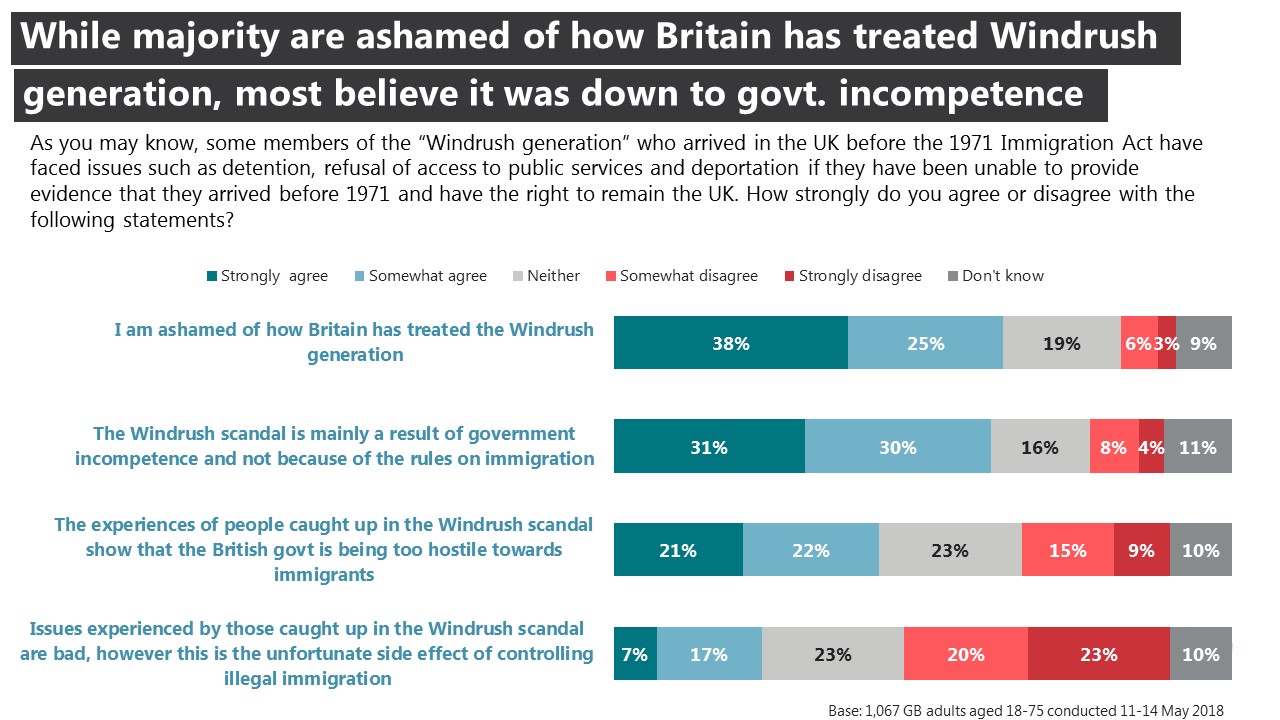 People hugely overestimate the proportion of foreign born citizens in Britain -  the average guess is 27% when it’s actually only half that number 13.5% .
And on average people think that one in every six (15%) foreign born citizen is living here illegally.  While there are not up to date figures for this, Home Office estimates which are based on ONS Census data of 2001 put the figure at less than one in ten (9%).

Since the EU referendum we have seen that Britons have become less negative about the impact of immigration and these views have remained fairly stable since then.  However, despite these overall trends just one in five say they have become more positive about immigration since the Brexit vote and one in four say they have become more negative. For those who have become more positive, there are two reasons – one is that people are more likely to say they recognise the contribution of immigrants and the other is that people feel reassured that Brexit will lead to a reduction in immigration.  And the majority of the public still want immigration levels reduced and there is support for ‘tough but fair’ immigration policy that is tough on illegal immigrants but one that protects those who have a legal right to be here.   People put the Windrush scandal down to government incompetence rather than immigration policy per se and the scandal clearly has had an impact on people’s perceptions of how Theresa May is handling the issue of immigration – levels of dissatisfaction have increased, particularly among Conservative supporters.

Ipsos interviewed a representative sample of 1,067 adults aged 18-75 across Great Britain. Interviews were conducted online between 11 -14 May 2018. Data are weighted to the profile of the population.