The latest Ipsos Political Monitor shows a reduced Conservative lead over Labour on handling the economy, with Labour seen as the party with the best policies on tax. The public are less inclined to want Boris Johnson to be replaced than in January, though a majority still do so. Meanwhile, Rishi Sunak’s ratings as a potential PM have fallen sharply amidst continued economic pessimism and public concern about the cost of living. However, despite this, Labour are yet to convince the public they are ready for government or that Keir Starmer is ready to be Prime Minister. 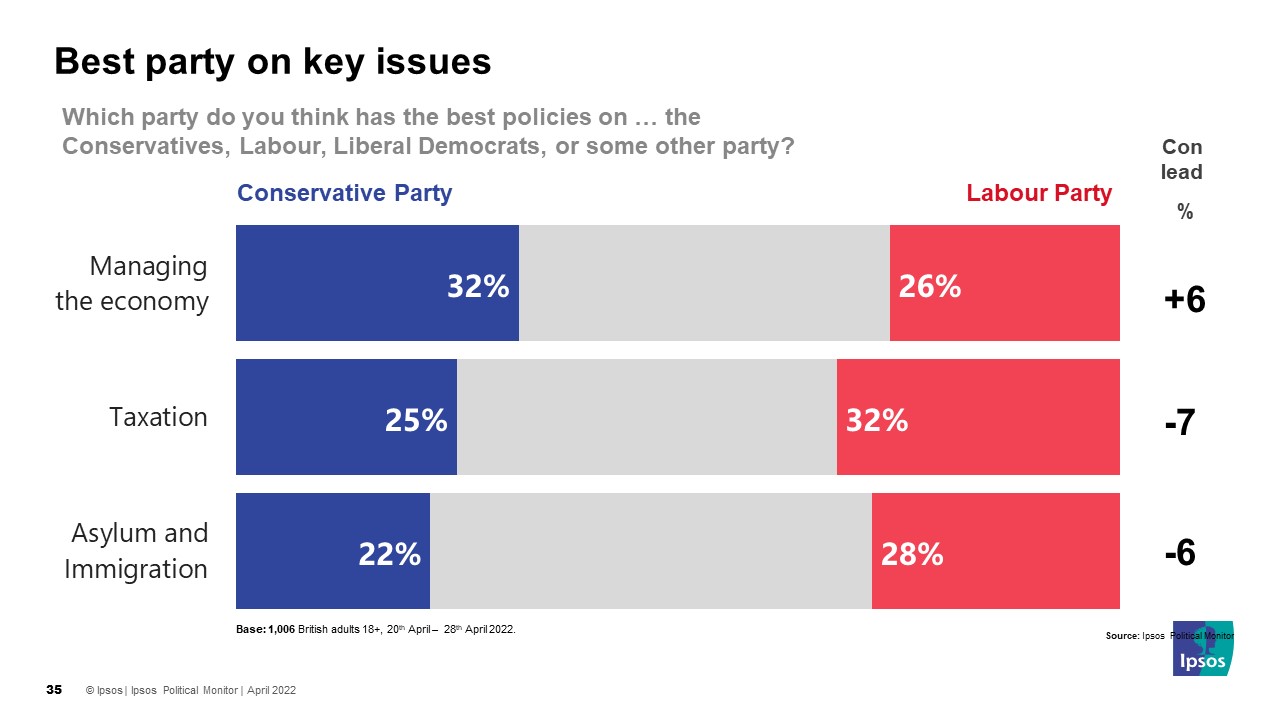 Should the Conservatives / Labour change their leader?

Looking ahead to the next election 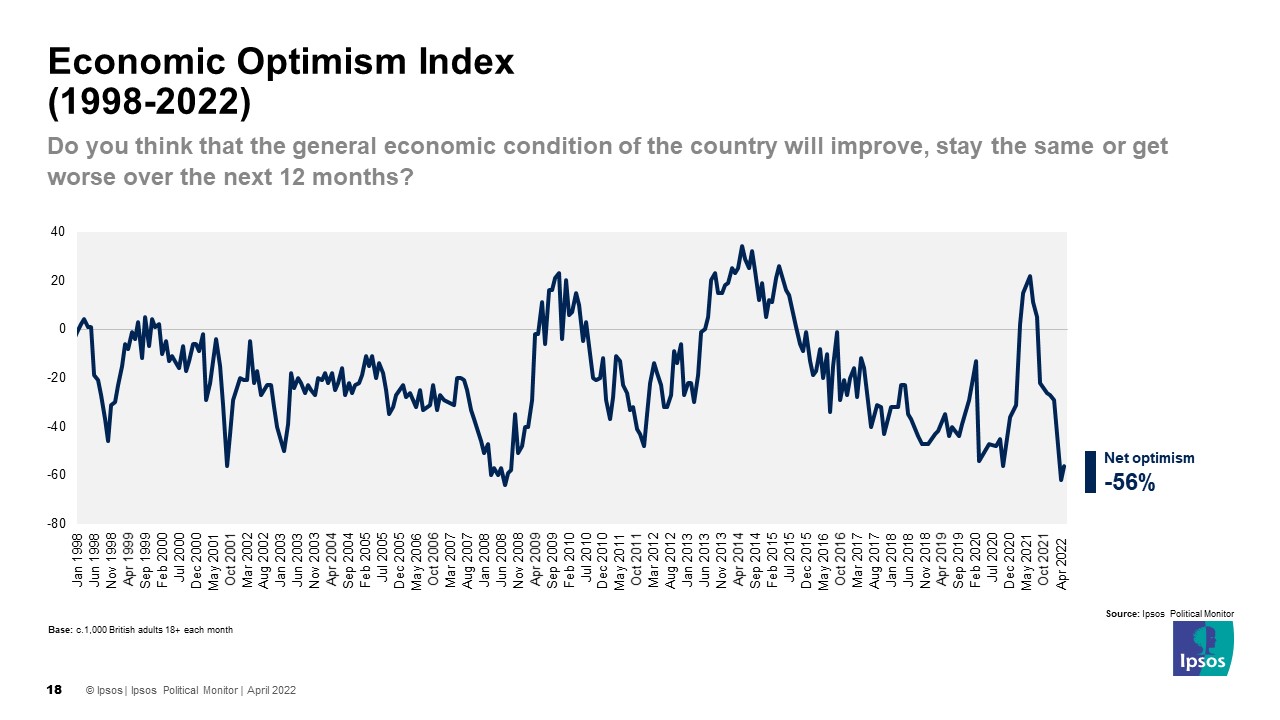 Who has what it takes to be Prime Minister? 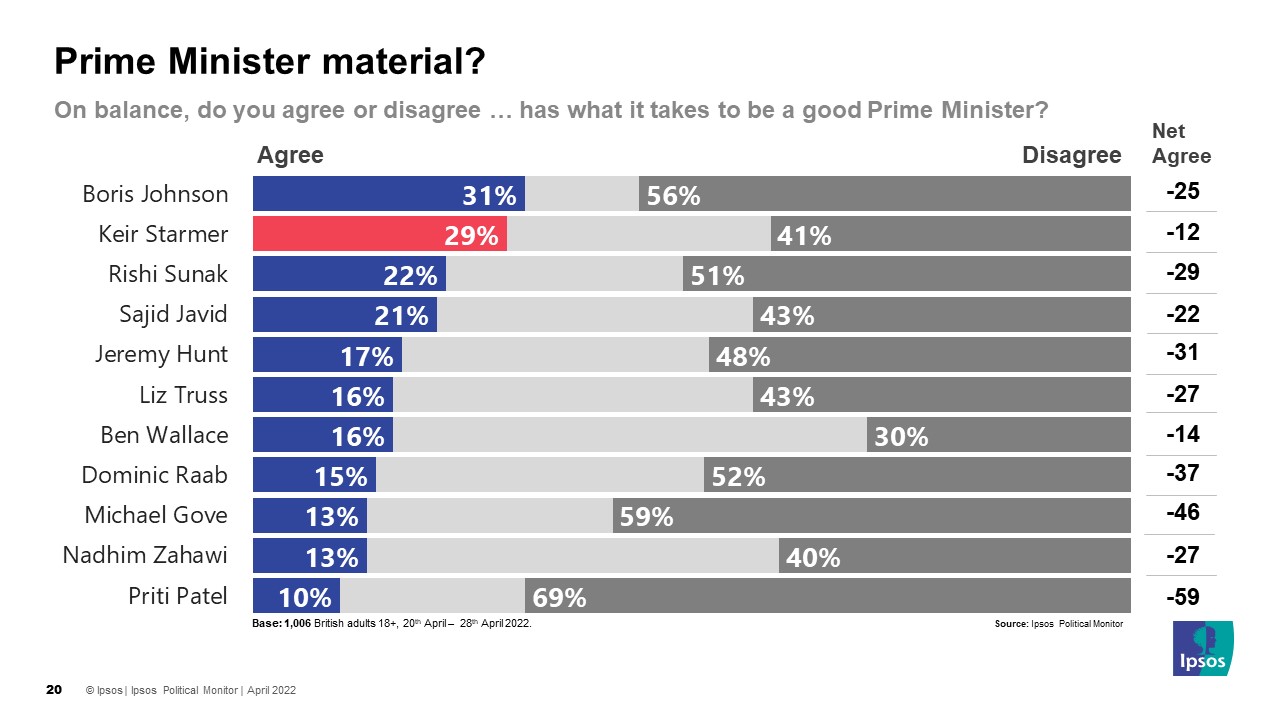 What would be important in local elections?

When asked which of the following would be ‘very important’ to you when deciding who to vote for in local elections on the 5th May people point to both national and local factors (if no local elections were happening in their area, people were asked to think about what would be important if there were):

And when asked about recent stories / national issues, the cost of living stands out as something that could be very important to how people would vote next week:

Labour retain a modest lead in voting intention terms this month. Labour are on 40% (+1 from March), the Conservatives 35% (no change) and the Lib Dems and Greens are both unchanged on 10% and 7% respectively.

The next few months could be crucial for the Prime Minister and his Chancellor. With inflation at the top of the public’s agenda amidst a pessimistic outlook on the economy, Rishi Sunak will look to act on concerns about the cost of living crisis if he wants to rebuild the lead the Conservatives had at the last few elections on the economy and tax.

It was around this point that Boris Johnson’s predecessors David Cameron and Margaret Thatcher began to see their scores improve in their first term, but he is facing local elections with challenges still ahead. Public support for replacing him as leader has softened from the low point in January, but many are still dissatisfied. Labour on the other hand can make progress from their lead on tax and being most trusted on cost of living, but voters still have doubts that they are a credible alternative Government.

Labour also maintain a slender lead on asylum and immigration, but in truth both parties’ ratings are fairly lacklustre on this issue among the public. Even Conservative supporters though think the government could do a better job of handling immigration, which will be contributing to the Home Secretary’s low favourability amongst the public. Meanwhile, Boris Johnson retains support from his own voters, while Rishi Sunak’s public ratings as a potential PM have fallen further, but few other leading Conservatives have a strong positive profile among most Britons.

Ipsos interviewed a representative sample of 1,006 adults aged 18+ across Great Britain. Interviews were conducted by telephone: 20th to 28th April 2022. Data are weighted to match the profile of the population. All polls are subject to a wide range of potential sources of error. On the basis of the historical record of the polls at recent general elections, there is a 9 in 10 chance that the true value of a party’s support lies within 4 points of the estimates provided by this poll, and a 2 in 3 chance that they lie within 2 points. This is especially important to keep in mind when calculating party lead figures