As the Conservative leadership election continues, new polling by Ipsos shows half of Britons (51%) are in favour of a general election being held this year, once the new Prime Minister is in place. Just 1 in 5 (20%) are opposed to a general election taking place this year while a quarter (24%) neither support nor oppose.

Unsurprisingly, support is higher among 2019 Labour voters, two-thirds (67%) support an early general election while only 1 in 10 (11%) oppose. In comparison, opinion is split among Conservative voters. While 4 in 10 (40%) support bringing a general election forward to 2022, 34% are against. 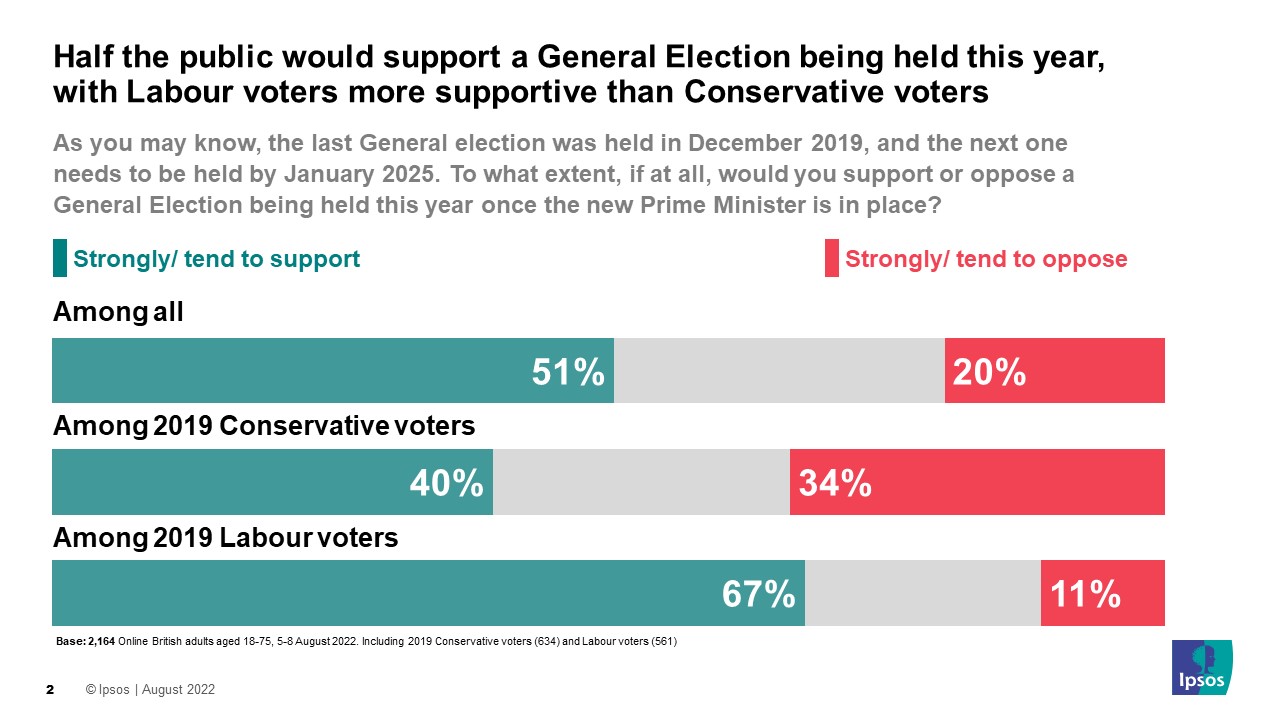 Why do people want an election this year?

Among those who say they support an election once the new Conservative leader has been chosen, most say this is because the country is in crisis and needs to decide a way forward (46%). Around 4 in 10 say they want to change the government (39%) while similar proportions say the public should be more involved in political decision making (38%), the Prime Minister will not have won a General Election (37%) or the new PM should seek permission from voters for any changes they want to make (37%).

Among 2019 Conservative voters who support an election, 43% say this is because the country is in crisis and needs to decide a way forward while 39% say the public should be more involved in political decision making or the new PM should seek permission for changes.

Over half of Labour voters who want the General Election to be moved forward say this is because they want to change the Government (54%) while 50% say it is because the country is in crisis and we need to discuss the way forward.

Why do people not want an election this year?

More than half of those who say they are opposed to holding a General Election this year, once the new Prime Minister has been decided, believe the country is currently in crisis and an election would be a distraction (53%), while just under half (48%) say the Conservative Party already has a mandate from the public by winning the 2019 General Election. More than 4 in 10 (46%) oppose an early election as they feel politicians should just get on with the job of running the country. Around a third say the new PM should be able to finish the job Boris Johnson started (35%) or believe an election is unnecessary (32%).

Among 2019 Conservative voters who are opposed to an election this year, 68% say it would be a distraction from the crisis the country is currently in while 63% say the Conservative government already has a mandate and 60% believe politicians should just get on with the job.

How will the Conservative Party fare should there be an election this year?

Britons are more than twice as likely to expect a General Election held this year to decrease the chances of the Conservative Party winning (39%), rather than increasing their chances (16%). Three in 10 (31%) say it makes no difference.

Opinion is consistent across party lines, 42% of 2019 Conservative voters expect an early election to decrease their party’s chances of winning while 43% of 2019 voters say the same.

Whoever the new Prime Minister is come September, the public aren’t going to be giving them time to settle in, with half already calling for a General Election and even more Conservative voters wanting one than not. Looking at recent history, the guidance isn’t clear whether they should gamble like Theresa May or be cautious like Gordon Brown, but as the cost of living continues to rise, a winter election certainly looks like an unappealing time to seek a mandate.

Ipsos interviewed a representative quota sample of 2,164 adults aged 18-75 in Great Britain. Interviews took place on the online Omnibus on 5th- 8th August 2022. Data has been weighted to the known offline population proportions. All polls are subject to a wide range of potential sources of error.