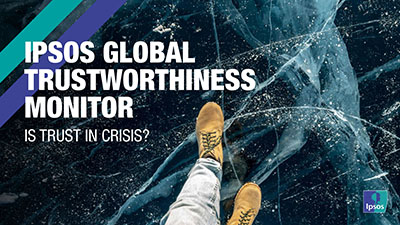 Today, Ipsos publishes the Global Trustworthiness Monitor, a new report analysing trust in 2021, which finds that, despite popular belief, we are not experiencing a ‘crisis of trust’.  The monitor reveals that pharmaceutical, banking companies and governments are now seen as more trustworthy than they were three years ago.

Across 29 countries, a global country average of 31% rate pharmaceutical companies trustworthy (32% of Britons), compared to 25% in 2018. Also, 28% say the same of banking companies (up from 20% in 2018) and 20% of their government (up from 14%). One possible explanation for the improvement could be how these sectors have acted during the course of the COVID-19 pandemic.

By comparison, the trustworthiness of technology companies has declined from 38% to 34%. However, the tech industry remains the most trusted among the nine sectors studied.

The conventional wisdom about trust is still that it is in crisis. In the first wave of the Global Trustworthiness Monitor three years ago, Ipsos challenged this viewpoint by looking at a wide range of data sources and trends from across the world. Our main conclusion then was that, at a global level, trust in most institutions, sectors and professions has been stable for a long, long time, and the changes that have occurred over the last 20 years have been slow and far from dramatic. There is no evidence to suggest that this observation does not still hold true. 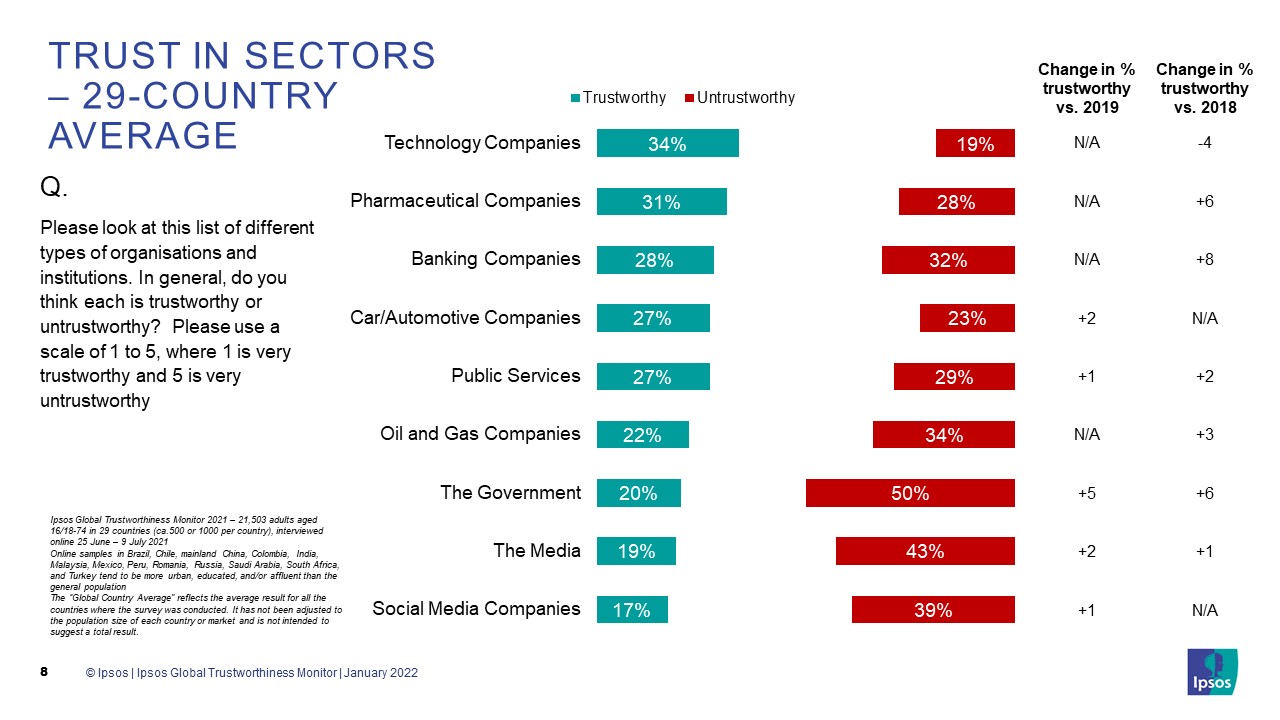 Despite being the home of many of the world’s leading technology companies, the United States is one of the few countries in which respondents are more likely to see technology companies as untrustworthy (29%) than as trustworthy (27%). The U.S. shows the largest percentage disagreeing that technology sector companies work to prevent the spread of false information (31%) which may influence their views on the trustworthiness of the sector.

Chileans are notable for their poor view of pharmaceutical companies, with just 12% saying they are trustworthy compared to 58% who say they are untrustworthy; the least favourable score for any country measured.

People in China are particularly positive about banking companies, with nearly two-thirds (63%) considering them as trustworthy compared to just one in ten (11%) who say they are untrustworthy.

Just one in ten (12%) Britons trust the media and compared to the global country average of 19%.  Globally, the most trusted news sources to provide accurate information about politics and current affairs are the more traditional forms of media (newspapers, radio, television), as well as online newspapers and news websites or apps while trust in other digital sources is lower. On average, across all 29 countries surveyed, the most used media formats are online newspapers/news sites, TV and, despite being far less trusted, social media.

These are the findings of an Ipsos online survey conducted 25 June – 9 July 2021 via the Ipsos Online Panel system in 29 countries: Argentina, Australia, Belgium, Brazil, Canada, Chile, China (mainland), Colombia, France, Germany, Great Britain, Hungary, India, Italy, Japan, Malaysia, Mexico, the Netherlands, Peru, Poland, Romania, Russia, Saudi Arabia, South Africa, South Korea, Spain, Sweden, Turkey, and the United States. The headline index results for this year are based on the full 29-country sample while trend results look back to previous waves of the survey focus only on the 22 countries which have featured in all three waves of the survey.

The samples in Argentina, Australia, Belgium, Canada, France, Germany, Great Britain, Hungary, Italy, Japan, the Netherlands, Poland, South Korea, Spain, Sweden, and United States can be taken as representative of their general adult population under the age of 75. The samples in other countries (Brazil, China, Chile, Colombia, India, Malaysia, Mexico, Peru, Romania, Russia, Saudi Arabia, South Africa and Turkey) produce a national sample that is more urban and educated, and with higher incomes than their fellow citizens. The survey results for these countries should be viewed as reflecting the views of the more “connected” segment of their population.