More than half (52%) of the public say the NHS is what makes them most proud to be British, placing it above the armed forces (47%), the Royal Family (33%), Team GB (26%) and the BBC (22%)1. Despite recent coverage of care failings and the increasing financial squeeze, we are prouder of the health service than we were two years ago, shortly after the Olympics (52%1 now compared with 45%2 then). Further, according to the Ipsos Global Trends Survey, Britain is the second most positive country out of 19 surveyed about the quality of their healthcare, with only Belgium rating their healthcare higher3.

In April 2014, Simon Stevens, the new Chief Executive of NHS England, took responsibility for this unique institution and, with it, a full inbox of challenges to address if he is to maintain public confidence and pride in the service. So what, according to the public, are the key issues he faces? 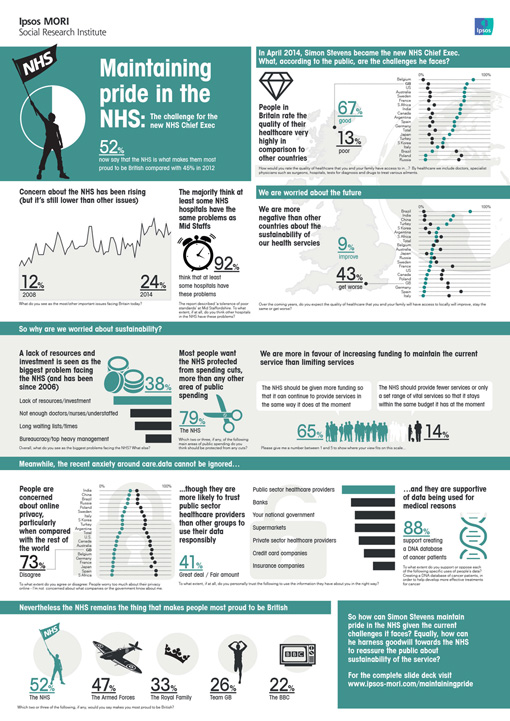 Most people are positive about the NHS, but they are concerned about its future

Although two thirds (67%) of Brits consider the quality of their healthcare to be good and 17% think it is very good3, concern about the NHS has been rising. A quarter (24%) think the NHS is one of the most important issues facing Britain today; and this proportion is higher than in recent years4.

And, while we are positive about the quality of care we receive, Mid Staffs remains in the public consciousness. Most people remain aware of the issues there, and the majority think at least some NHS hospitals have the same problems. Three in five (58%) say that they have heard a great deal or a fair amount about the problems Mid Staffordshire NHS Foundation Trust has faced in recent years5; nine in ten (92%) think at least a few other hospitals have similar problems, while 27% think that all, or most, hospitals do5. These proportions have not changed significantly during the past year6.

But the real challenge relates to the future of the service. Fewer than one in ten of us (9%) say we expect quality to improve over the coming years, while 43% think it will get worse7. This makes us among the least optimistic of the 20 countries surveyed, and reflects concerns about the sustainability of the NHS in the future.

Linked to this, a lack of resources and investment is seen as the biggest problem facing the NHS in England (38%)8 and this reflects growing concern in the sector. For example, The King’s Fund data shows only 16% of NHS Trust finance directors are confident that they will achieve financial balance by 2015/169. In addressing the financial challenge, two thirds of the public (65%) favour increased funding to maintain current service provision while only 14% think that services should be limited in order to stay within the present budget10. The majority (79%) want the NHS protected from any spending cuts – a higher proportion than for schools (51%), care for the elderly (51%) or the police (39%)11.

Meanwhile, the recent anxiety around care.data cannot be ignored…

The recent fallout from care.data may reflect our concerns about online privacy. British people are particularly concerned when compared with the rest of the world. Almost three quarters (73%) of Brits are concerned about what companies and the government know about them, with Britain the fifth most concerned country out of 20 surveyed12.

It is clear that the NHS is as close to our hearts as ever. The question for Simon Stevens now is how to maintain this pride and confidence in the face of the current challenges. Perhaps more importantly though, how can he harness this goodwill to reassure the public about its sustainability?

Maintaining pride in the NHS: The challenge for the new Chief Executive from Ipsos