With a little less than 200 days to go until Scotland goes to the polls in the independence referendum, our latest poll for STV News shows little change in public opinion compared to our last poll in December 2013. Among those certain to vote in a referendum, around a third (32%) would vote ‘Yes’ if the vote was held now (down by 2 percentage points from December) while 57% would vote ‘No’ (unchanged from December) and 11% remain undecided. 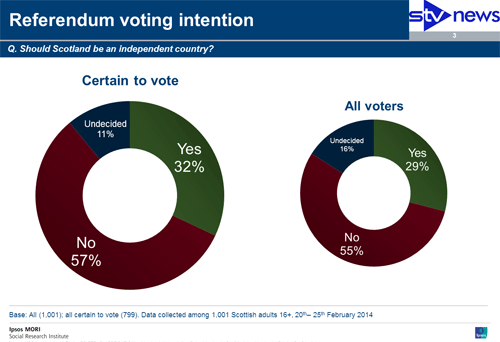 A closer look at the poll reveals familiar patterns of voting among different groups in the population. In Scotland’s most deprived neighbourhoods support for independence continues to exceed support for the union with 47% saying they would vote ‘Yes’ and 41% backing a ‘No’ vote. However, in the most affluent areas of the country just 20% would vote ‘Yes’ while 71% would vote ‘No.’ Men remain more supportive of independence then women (38% v 27%) while women remain more likely more likely to vote ‘No’ and are more likely to be undecided.

Our STV poll also continues to show a potentially high turnout in September with 78% telling us that they would be ‘absolutely certain’ to vote in an immediate referendum. The one major difference highlighted in the poll is among those aged 16-24, 56% of whom say that would be certain to vote.

Interviewing for the poll took place between one and two weeks after the three main UK-wide parties announced that, in the event of a ‘Yes’ victory in September, the rest of the UK would not enter into a currency union with the Scotland.

For most voters, the announcement of any future currency union appears to have had little effect with 56% saying that it would not impact on how they would vote in the referendum. The announcement also appears to have persuaded very few committed ‘Yes’ or ‘No’ voters to change their minds. However, among undecided voters, around a third (34%) think that the announcement will make them more likely to vote ‘No’ while 16% report that it makes them more likely to vote ‘Yes’ and 44% say it has had no impact.

“Our latest poll for STV shows that public attitudes have changed very little over the past three months and that the ‘No’ campaign appears to retain a healthy lead. The important recent debate over currency appears not to have shifted committed voters from their positions while undecided voters appear a little more inclined to vote ‘No’ as a result. Having said that overall support for a ‘No’ vote has not changed since December. We are now into the final 200 days before the referendum takes place and both sides will be stepping up their efforts to win over those who yet to decide how they vote. Time will tell whether this has significant impact on public attitudes."