With the official campaigns for the independence referendum now underway, our latest poll for STV News shows that ‘Yes’ has gained ground since our last poll in February 2014. Among those certain to vote in the referendum 36% would vote Yes (up by 4 percentage points) while 54% would vote No (down by 3 points) and 10% are undecided (down by 1 point). 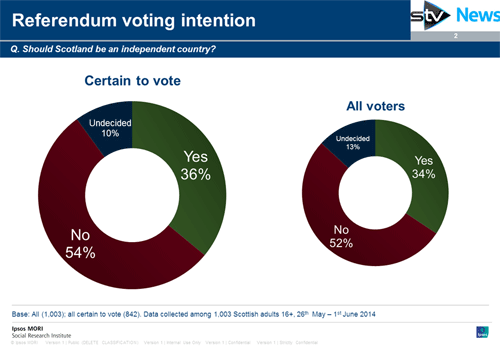 When undecided voters are removed from the figures, 40% of those certain to vote would vote Yes while 60% would vote No.

Both sides in the debate will be encouraged that the level of public interest in the referendum appears to be growing; over 8 in 10 (82%) tell us that they are certain to vote in the referendum, an increase of 4 percentage points from February. This growth in interest appears to be most striking among the youngest voters, aged 16-24, two-thirds (66%) of whom say that they are absolutely certain to vote in September, up 10 points.

A closer look at the poll reveals positive and negative messages for both side of the debate. The Yes campaign appears to have had the most positive impact among male voters who are now split equally in support for the independence and the union but have made little impact in persuading women, with 28% of certain female voters backing independence. And while support for independence in Scotland’s most deprived areas has fallen to 41% the Yes campaign will be heartened that their message has gained more traction in the most affluent neighbourhoods where support has risen to 33%.

“The Yes campaign has made some significant progress in persuading the public in recent months. With just over 100 days to go until the referendum they will hope that this represents momentum that will see support continue to grow up to September 18th. However, it is clear that the No campaign retains a healthy lead and, with the referendum fast approaching, there would need to be significant change in opinions if Yes is going to win.’