Public support for welcoming refugees is part of a broader warming of attitudes to immigration that pre-dates the Ukraine crisis, according to the latest findings from a survey that has tracked immigration attitudes since 2015.

The latest wave of the Ipsos/British Future Unbound Immigration Tracker shows three-quarters (75%) of people agree that ‘People should be able to take refuge in other countries, including in Britain, to escape from war or persecution,’ while 16% disagree.  The research, which involved interviewing 3,206 British adults 18+ online between 28 January – 10 February 2022, before the invasion of Ukraine and the resulting urgent calls for refugee protection for those fleeing violence, helps explain the public support for welcoming refugees from Ukraine that has been found in other recent surveys. 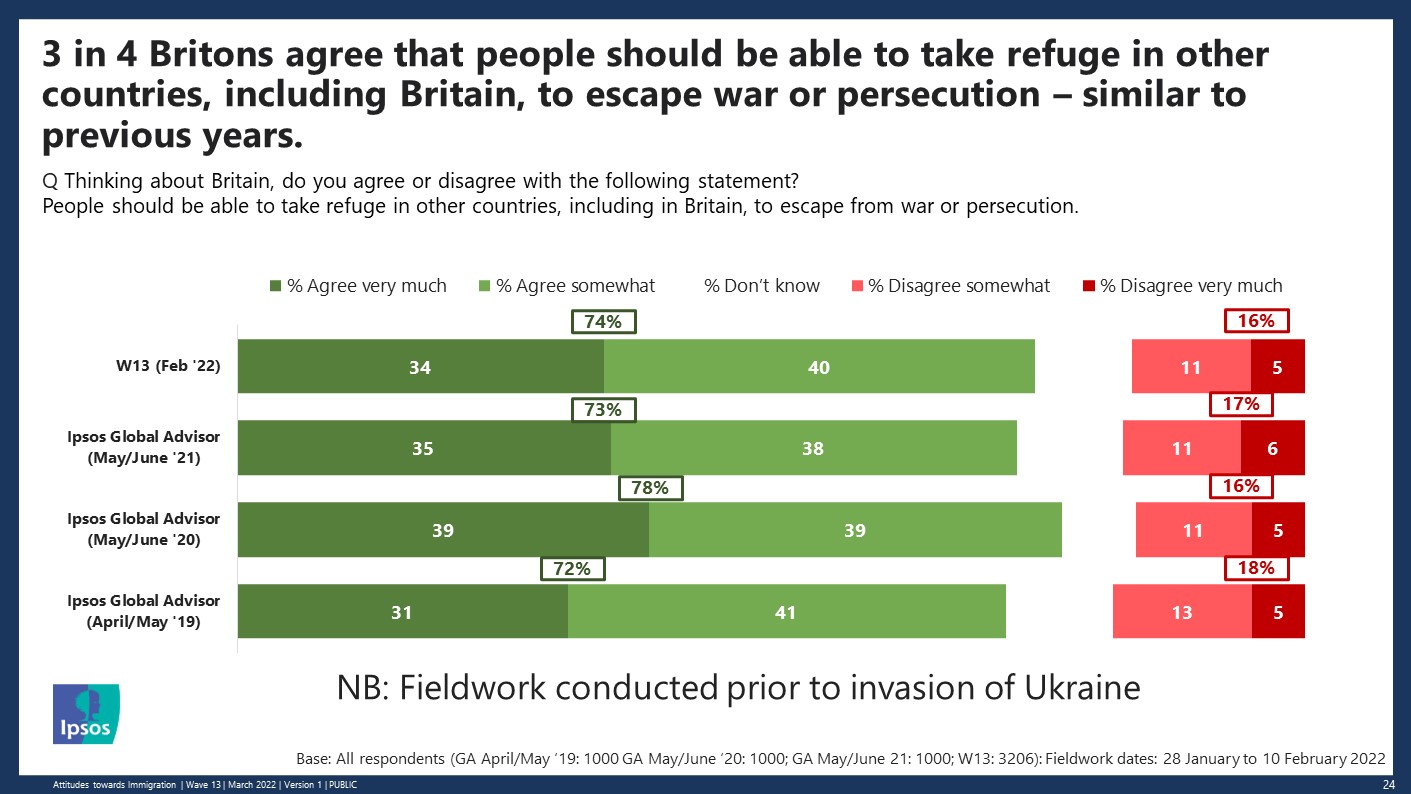 The Ipsos survey with thinktank British Future finds that the number of people wanting immigration numbers reduced is at its lowest level for the last seven years. Support for reducing numbers has fallen 25 points since 2015: some 42% of people now say they would like immigration number to be reduced, compared to 67% when the survey was first conducted in February 2015. Around three in ten (28%) would now prefer immigration numbers to remain at the same level, while 22% would like to see numbers increase – the highest level since the series began. 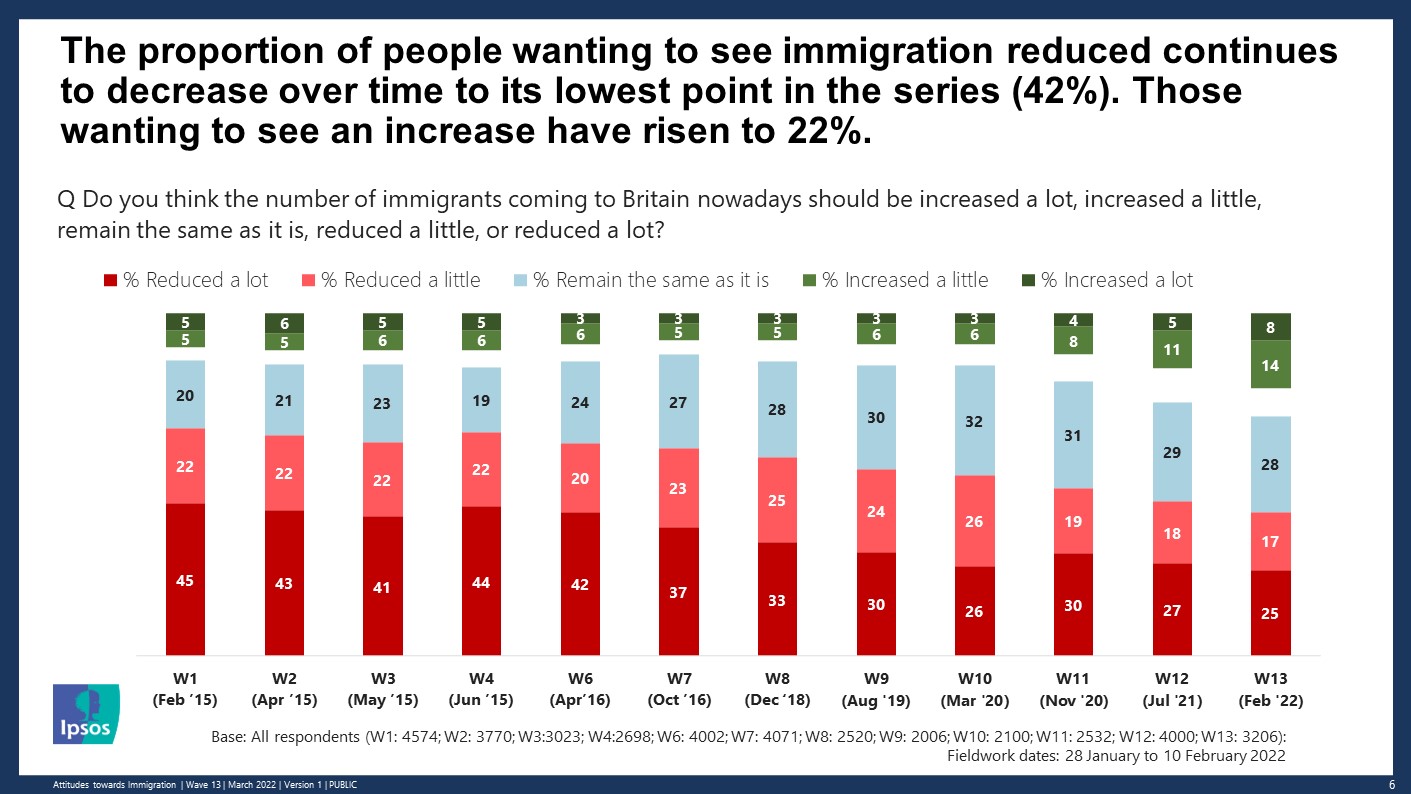 The findings reflect the gradual warming of public attitudes to immigration since the run-up to the EU referendum. The latest findings show that more people feel that immigration has had a positive effect on Britain (46%) than a negative effect (29%). When the tracker survey was first conducted in February 2015, by comparison, it found only 35% were positive while 41% were negative. 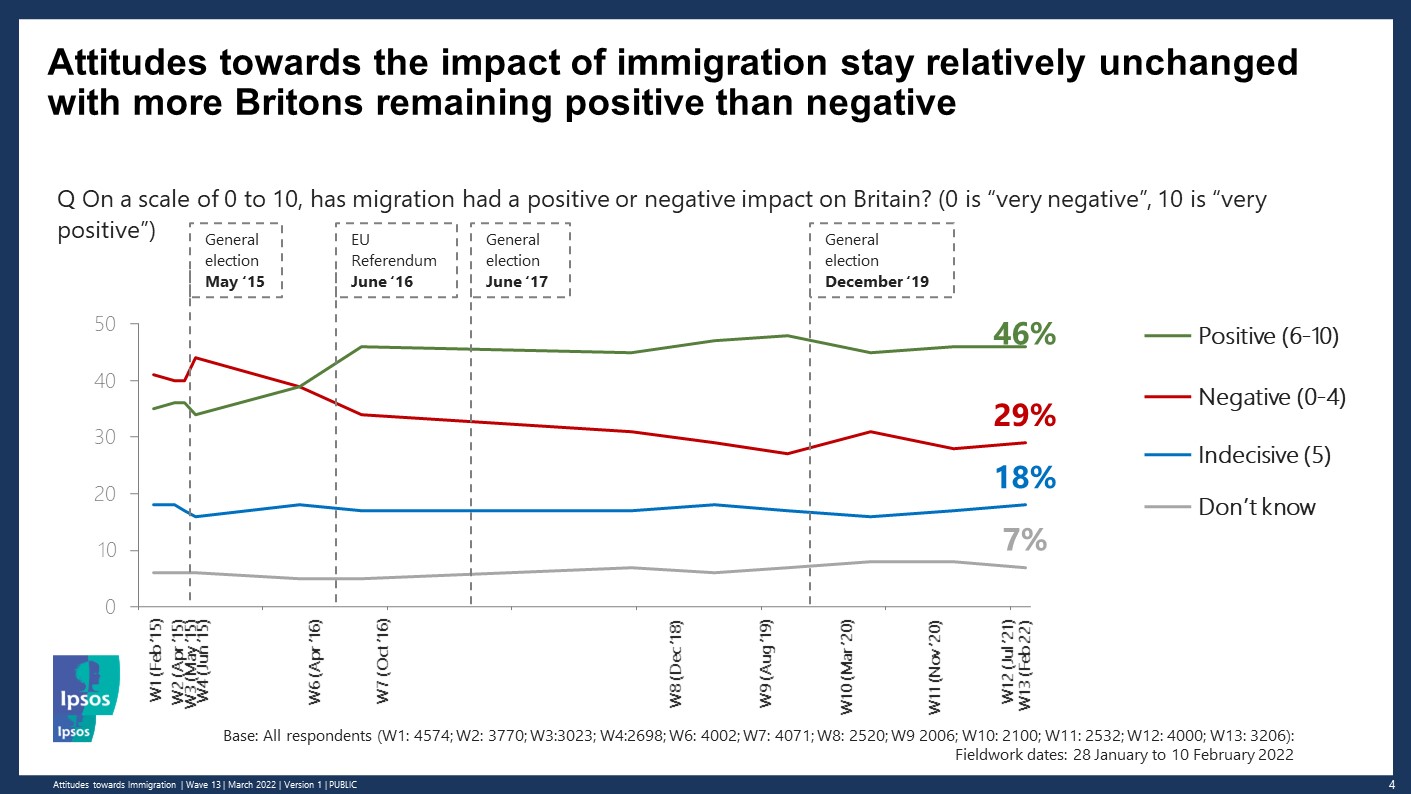 Sunder Katwala, Director of the independent thinktank British Future that led the research with Ipsos, said:

The government clearly misread the public mood about Ukrainian refugees and is now playing catch-up to make the generous offer of sanctuary that people feel is right. This is more than a short-lived, compassionate response to the terrible scenes on the news – underlying attitudes to immigration are becoming more positive over time. While four in ten people still want immigration numbers reduced, half the public now say ‘don’t reduce’. That’s a big shift over the last seven years.

We know that Britons are supportive of making it easier for Ukrainian refugees to come to the UK, but this research shows this is part of a long-term belief in the principle of giving refuge to people fleeing war and persecution.  Of course, support for the principle does not mean there are no concerns in practice, and during the pandemic there was little sign of Britons wanting to become more open to refugees – but this may now be being overcome by their high levels of concern for Ukrainian civilians caught up in the crisis.

More people agree that the UK should have an asylum system that is fair, even if that means allowing more asylum seekers to stay and live in the UK than we do now (46%), than prefer an asylum system that deters people from seeking asylum in the UK (32%). British attitudes on this have remained consistent compared to July 2021 when 44% preferred a fair system while 24% preferred one that deterred those seeking asylum.

That positivity is tempered, however, with concern about migrants attempting to cross the English Channel by boat to come to Britain. Most people (56%) have sympathy for people making channel crossings by boat, compared to 39% who say they have little or no sympathy. But failure to address boat crossings is a key reason for public dissatisfaction with the government’s handling of immigration.

Public dissatisfaction with the way that the government handles immigration has remained broadly steady across the tracker survey. The new findings show 59% dissatisfied and 11% satisfied; in February 2015 some 61% were dissatisfied and 12% satisfied.  Of those who say they are currently dissatisfied, 52% cite ‘not doing enough to stop channel crossings’ as a reason. In contrast some 30% of people cite ‘Creating a negative or fearful environment for migrants who live in Britain’.

It is with regard to immigration for work that attitudes are most positive. Two-thirds of the public (66%) feel that employers should now be able to recruit from oversees for any job where there are shortages in the UK, while 20% disagree. And support for employment from oversees for temporary seasonal work, for example in fruit picking and hospitality, increased to 73% (from 67% in July), with just 16% in disagreement (down from 21%).