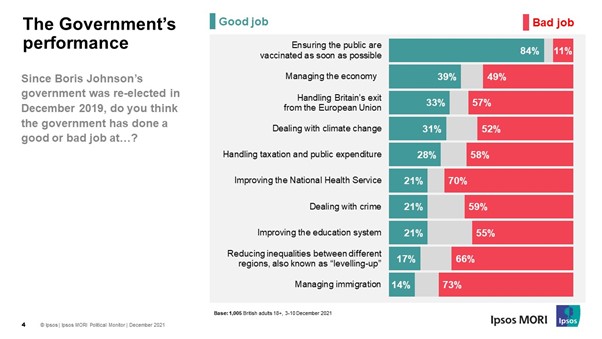 The poll also found that 52 per cent expect the economy to get worse over the next 12 months, double the 25 per cent who think it will improve, giving an Economic Optimism Index score of -27, unchanged on the -26 of last month.

Gideon Skinner, Head of political research at Ipsos, says of the findings:

It’s not just stories of Christmas parties that should give the Conservatives concern, but also perceptions of delivery on substantive policy areas, as our latest public scorecard on Government performance shows.  Britons still give the Government credit for the vaccines programme, but are more critical of delivery elsewhere – in particular immigration (where Conservative voters are also most unhappy), the NHS, and reducing regional inequalities.   The direction of travel is also getting worse for many of these since the summer, especially on managing the economy, where optimism shows little sign of returning.