Perhaps unsurprisingly given the rising cost of living, saving money is the most common reason given as to why households might want to save energy (80%). The impact of reducing energy usage on household budgets was highlighted in new analysis released earlier this week by the Social Market Foundation. This showed that if the UK Government rolled out an energy saving advice campaign like that in Germany, households could save between £250 and £400 per year on their energy bills.

While saving money is the most common motivation, a third (32%) say they want to save energy for the environmental and climate mitigation benefits for the UK, indicating that the public do not see a definite trade-off between saving money and saving the planet. Over a quarter (28%) say they might want to save energy to improve the UK’s energy security, while a similar proportion (24%) say it would improve their wellbeing such as by giving them peace of mind about how much energy they use. This may reflect ongoing concern and discussions about the whether the security of the UK’s gas supply and whether we might experience blackouts this winter. Just this week, National Grid suggested that this worst-case scenario is now less like to unfold due to a mild Autumn and energy links with other European countries. 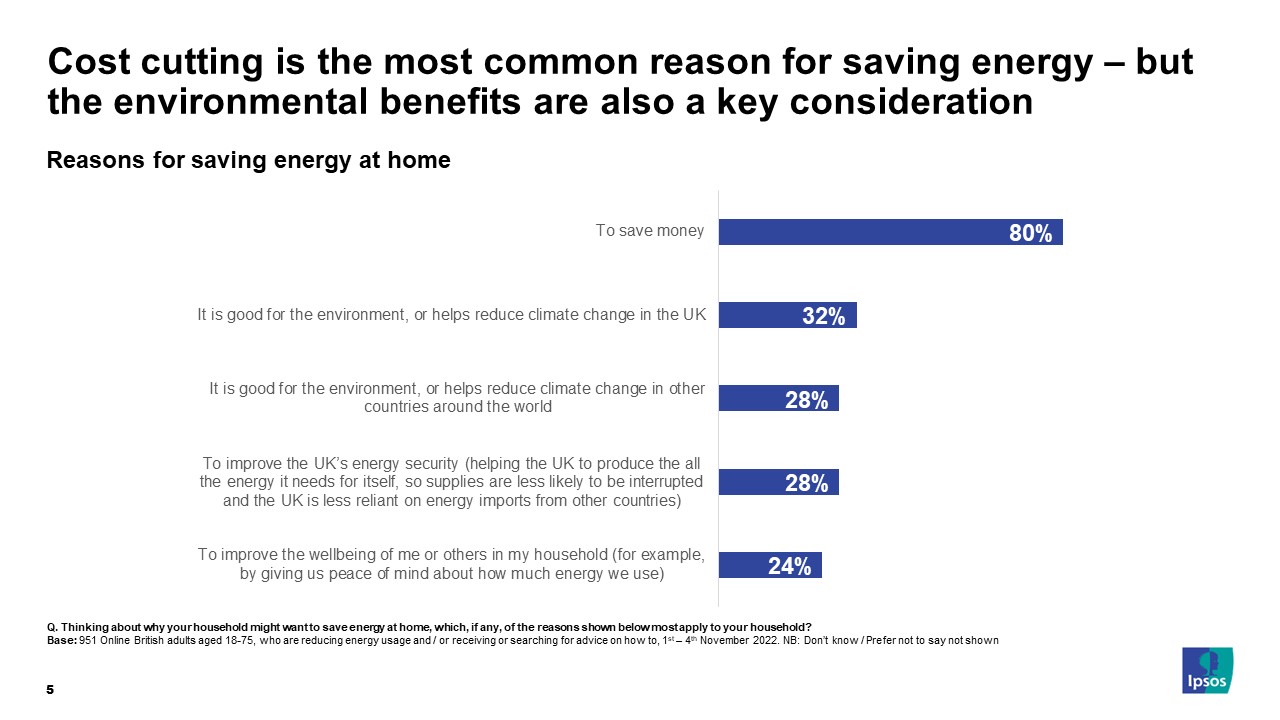 What advice do households want?

With many actively searching for advice on how to save the amount of gas / electricity used at home, we investigated what types of advice consumers would need. Responses indicated that they would welcome both advice on simple energy saving behaviours, as well as advice on more substantial changes they could make to their homes.

Around a fifth want advice on day-to-day behaviours such as reducing energy use while cooking, or using appliances or lighting more effectively. A quarter (24%) say they would need advice on accessing lower price energy tariffs (e.g. off-peak), making energy efficient home improvements or accessing grants to make such changes. 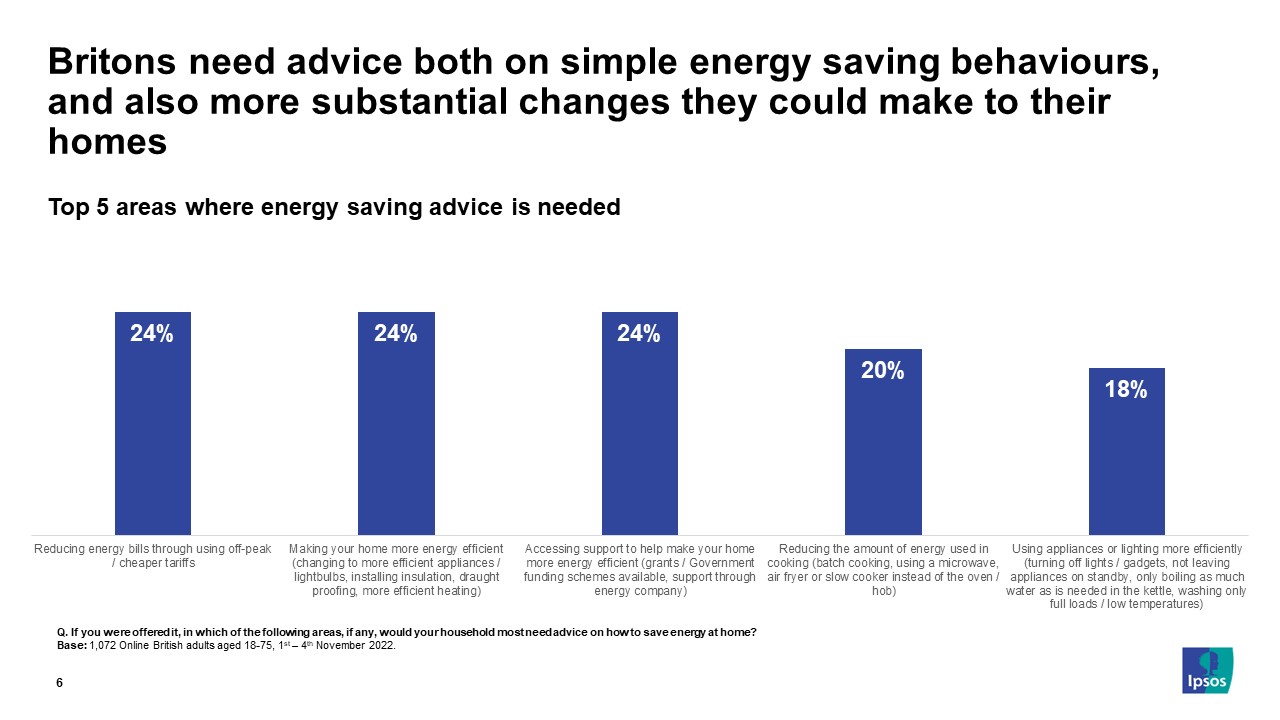 When asked why they would not want energy saving advice, very few indicated that they did not want to receive advice because they feel it would be an infringement on their own personal choice. Of all Britons, only one in twenty (6%) said they do not want to receive advice and that this is because they feel it’s their choice how they use energy at home.  Most commonly, consumers felt they already know how to save energy (13%) and around one in eight (12%) say they are already doing all they can to cut their usage.

Who should be giving energy saving advice?

Two in five Britons say energy companies (43%) or the UK Government (41%) should be most responsible, while a quarter (25%) feel Ofgem should be providing such advice. Last month, Ofgem announced a new public information campaign on energy saving that they will be coordinating with energy companies and other groups such as Citizen’s Advice.  Ofgem’s partnership approach fits well with who consumers say they would trust most to give advice on saving energy at home. Consumer organisations or websites like Citizens Advice, Money Saving Expert and Martin Lewis were most trusted (36%) and a quarter would trust specialist organisations like the Energy Saving Trust (24%) or scientists, academics or researchers (22%).  While the public think the Government and energy companies should provide energy advice information, few would trust them to do so. 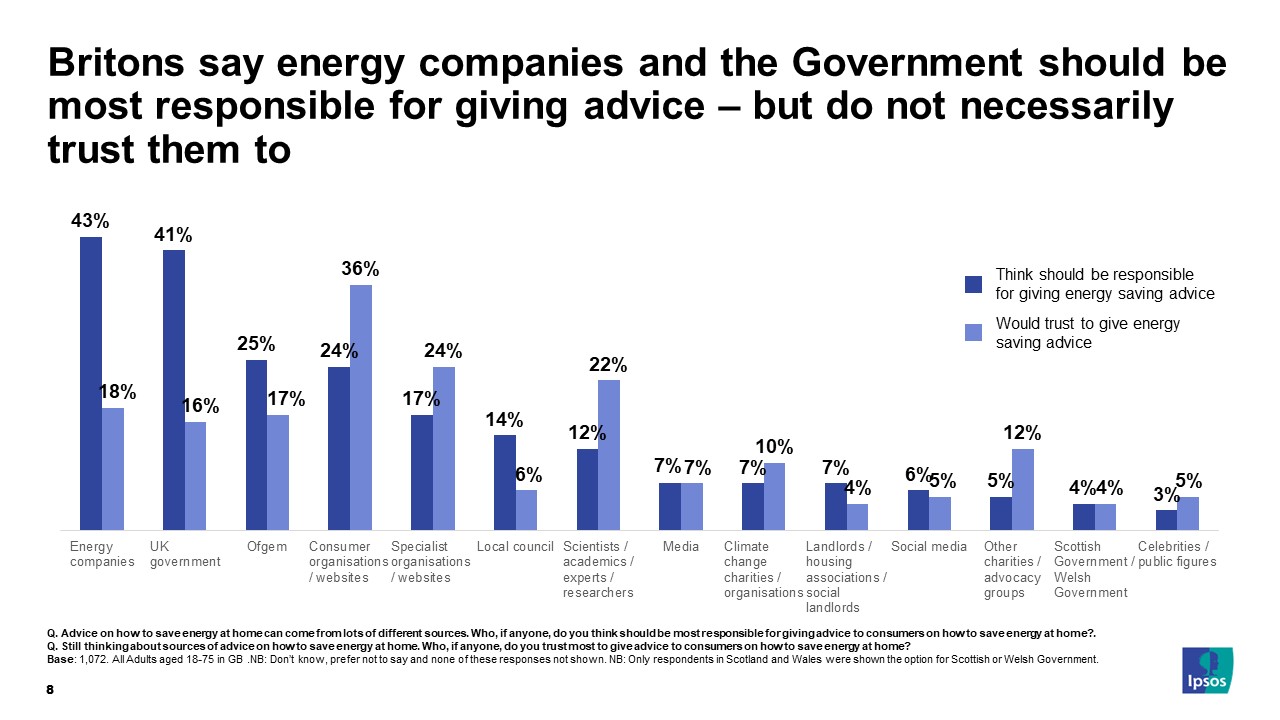 With households feeling the financial squeeze, there is clearly an appetite among the British public for advice on how to cut costs by using less energy. Some Britons do feel they need advice on the smaller actions they can take. Yet the larger actions that will continue to save them money in the long run – such as improving energy efficiency by installing insulation, including help to fund these changes – are the ones which feel perhaps the most daunting and where they need better guidance.
This is also seen in our Net Zero Living research with CAST, which shows that policymakers need to be clear about both the costs but also the cost saving benefits of net zero policies – like switching from coal and gas boilers to low carbon heating – when communicating with the public. The gap between who the public feel should be giving this advice and who they would actually listen to indicates a need for a cross-party communications approach. Bringing together Government, regulators, businesses and the third sector will be key to helping Britons feel better equipped to weather the storm this winter.