Almost all of the British public are concerned about the effects of plastic waste on the environment, yet only a handful feel that consumers should take most responsibility to find a solution, new research by Ipsos for King’s College London has found. Furthermore, most are reluctant to help solve the problem if it will cost them more.

The research, conducted online in February with 1,681 adults aged 16-75 across the United Kingdom, found that seven in eight adults claim to be at least “fairly concerned” about the issue, which the BBC documentary series Blue Planet II helped bring to the fore. 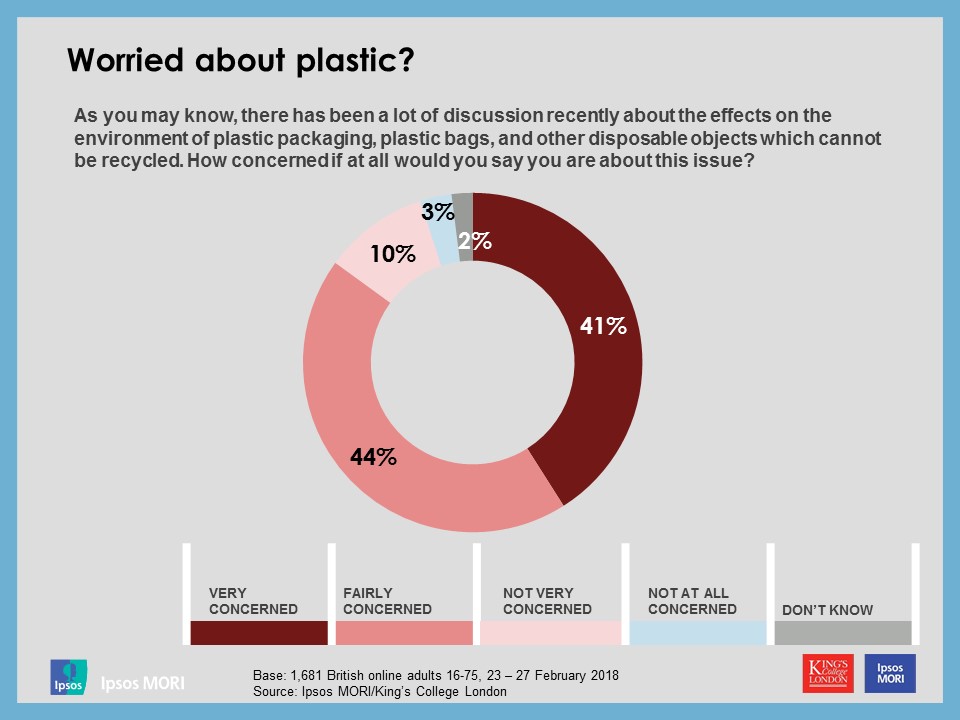 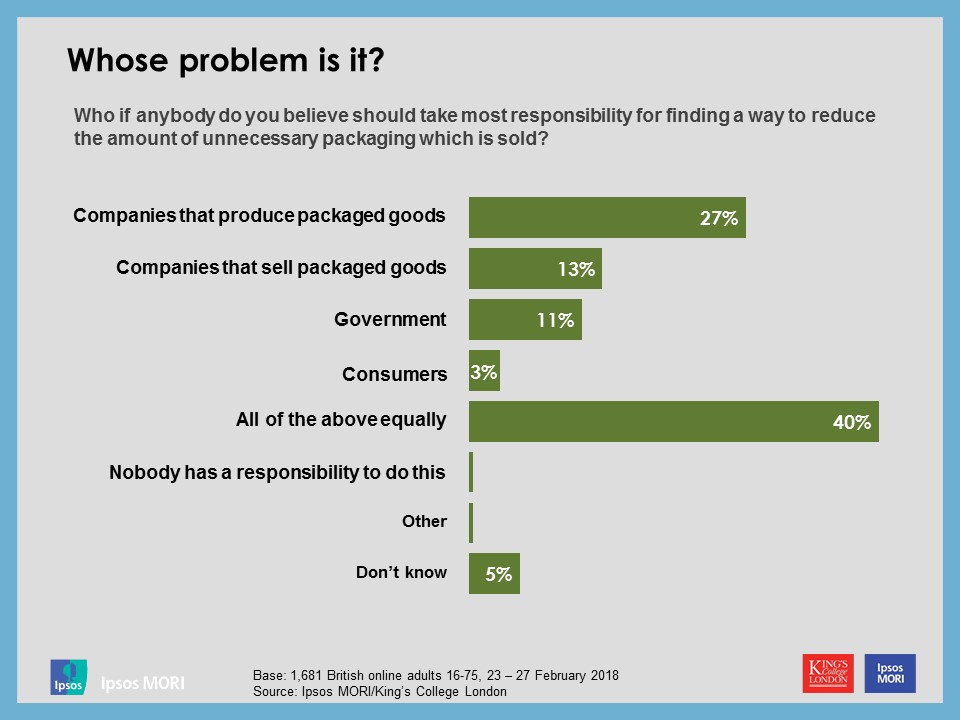 Many of the public say that they themselves would be prepared to take some steps towards solving the problem, but far fewer say they would do things to help that would cost them money. Three-quarters (75%) say they would re-use plastic bags and bottles, and more than half (54%) would be willing to buy more products made from recycled materials. However, less than half (43%) would stop buying goods that have packaging that cannot be recycled, and fewer still would be willing to stop visiting supermarkets and shops which use a lot of unrecyclable packaging (18%), pay more council tax to fund improved recycling facilities (14%) or pay extra for goods that have no packaging that cannot be recycled (12%). 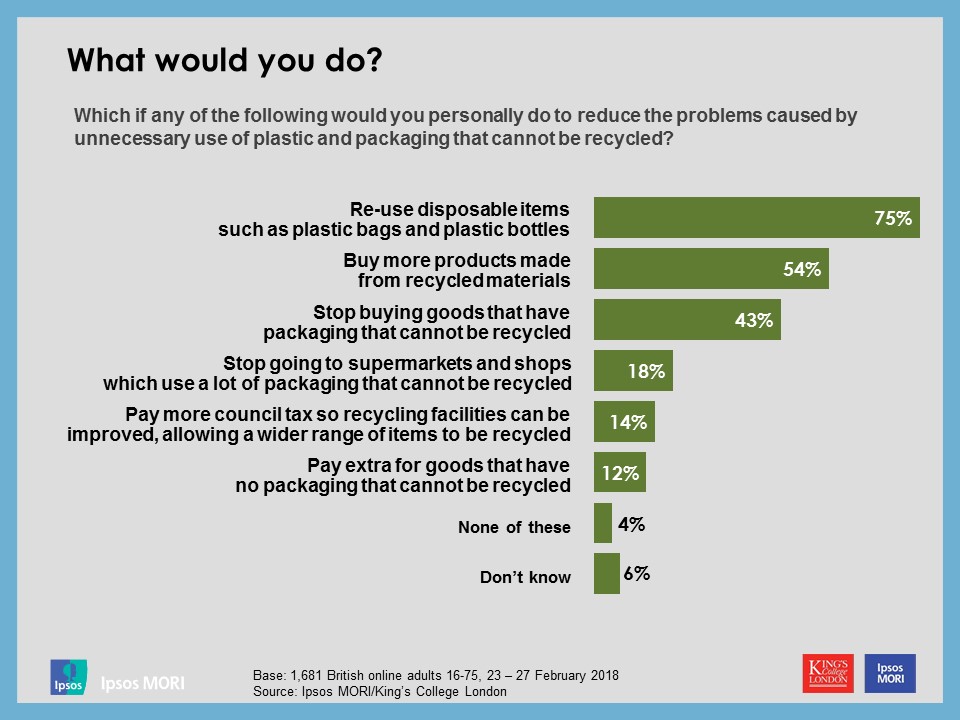 The survey also found that there is no wide agreement on which steps might help combat the problem in Britain, although several solutions were seen as likely to be effective by a substantial proportion of those asked. Around half of adults interviewed feel higher taxes on retailers that use a lot of unrecyclable packaging (48%) and forcing local councils to spend more on recycling (47%) would be effective, and almost as many (45%) think the government naming and shaming supermarkets and shops that use of lot of unrecyclable packaging would help reduce the problems caused by the issue. Two in five (41%) believe a tax on containers such as plastic drink bottles and disposable coffee cups would be effective. Rather fewer thought that big fines for households who do not recycle enough of their rubbish (25%) or a public information campaign, funded by taxpayers’ money (19%) would work well. 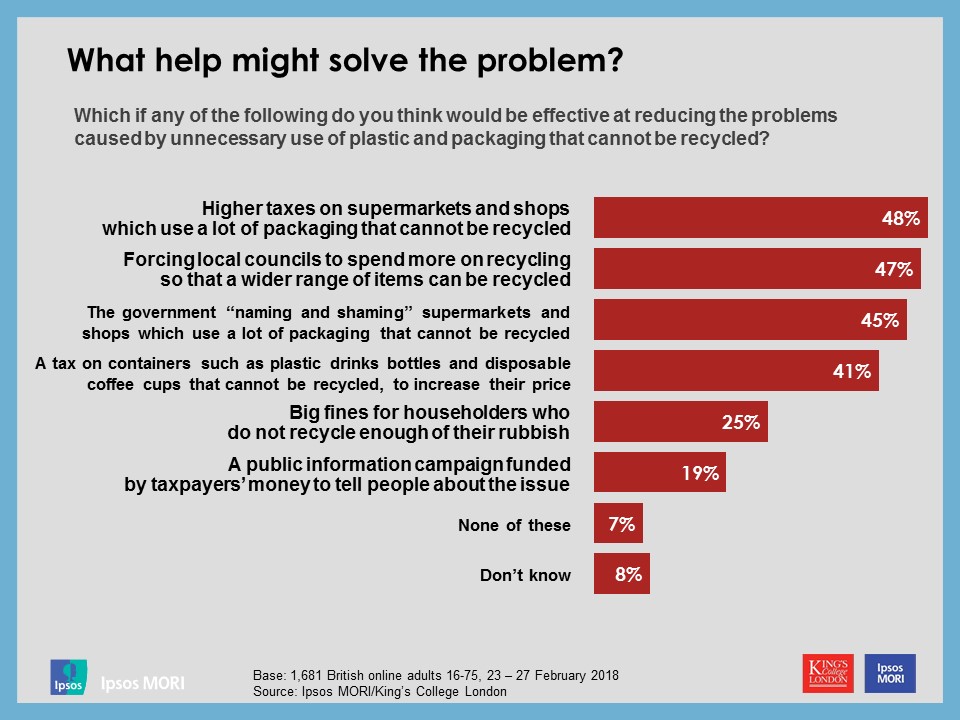 It also seems that younger generations are much less concerned than their older peers about the effects on the environment of unrecyclable plastic. While half of those born in or before the ‘Baby Boomer’ generation say they are “very concerned” about the impact of plastic packaging, bags and other disposable objects, only around a third (34%) of Millennials and 38% of adults in ‘Generation X’ express this degree of concern. On the other hand, levels of concern are significantly higher than average among middle-class professionals, graduates and those with the highest incomes, as is willingness to take inconvenient measures to help solve the problem. 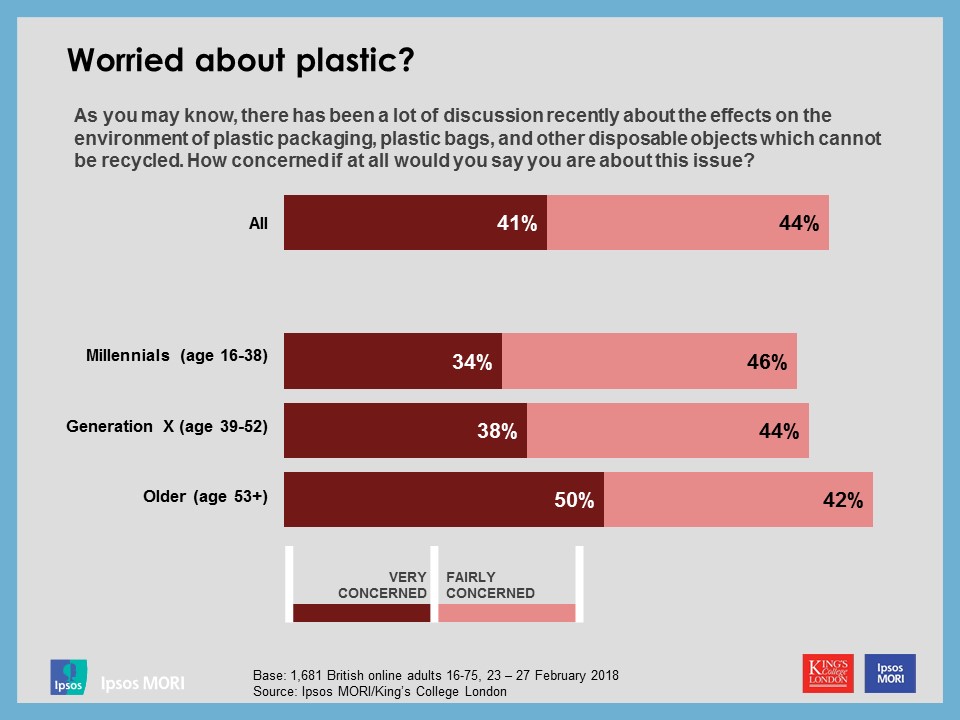 The public may say they are worried about the levels of plastic pollution and packaging, but they admit they are unlikely to take the initiative in doing anything about it.  It poses a challenge for policymakers and businesses that some of the steps that the public feel might be most effective in tackling the problem, are ones that they themselves would not support in practice: 47% of the public think forcing councils to spend more on recycling would help, but only 14% would pay more council tax to achieve it; and 45% think naming and shaming the retailers responsible would be effective, yet only 18% would stop using those retailers.

Interviews were conducted online by Ipsos among a representative quota sample of 1,681 adults aged 16-75 in the United Kingdom between 23rd and 27th February 2018. Data have been weighted to the known profile of the British population in this age range.

The survey was conducted for the Polling Club at King’s College London. The Polling Club, run by Professor Roger Mortimore, allows students to increase their knowledge and understanding of survey research and public opinion by helping to design and analyse the results from a poll carried out by Ipsos. For further details about the Polling Club, contact Professor Mortimore.