Despite being conducted less than six weeks since September’s vote, our latest poll for STV News reveals that a majority of Scots would support a further referendum being called in the foreseeable future.

Nearly six in ten of our respondents (58%) told us that they would support another referendum being called in the next five years, rising to 66% who would support such a move in the next ten years, regardless of circumstances.

Support for another referendum was highest among those who were most likely to have voted ‘Yes’ in September - over three quarters (77%) of those aged 18-34 would support a further vote within the next ten years. However, it is striking that support is above half (53%) even among those aged 55+ (who were much more likely to have voted ‘No’ in September). Similarly, 83% of those in Scotland’s most deprived neighbourhoods, where support for ‘Yes’ was strongest, back another referendum in the next ten years, compared to 54% of those in Scotland’s most affluent neighbourhoods. 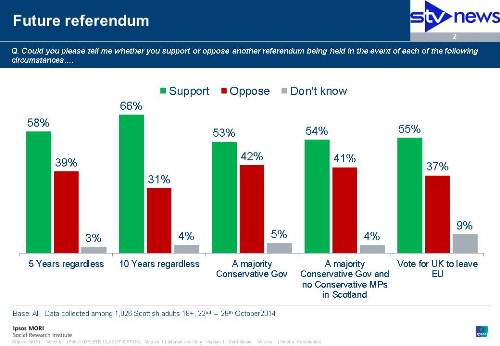 The potential outcome of upcoming political events also results in majorities supporting a further referendum, though to a lesser extent. Around half of Scots (53%) would support another referendum in the event of the Conservatives winning an overall majority in next year’s general election.  Also, 55% would back another independence referendum in the event of a vote for the UK to leave the European Union in 2017.

"The independence referendum campaign produced a level of interest in politics among Scots that had not been apparent for many years, leading to a record-breaking turnout of almost 85% on 18th September. As such, it is perhaps not surprising that support for a further referendum is high. It is clear, however, that although support is highest among those most likely to have voted ‘Yes’ in September, there are significant numbers of  likely ‘No’ voters who would also back a further vote in the next five to ten years."