A National Geographic/Ipsos survey of more than 1,000 American women found that only 29% of respondents identified as feminists, while another 69% did not. Just over 1% did not respond to the question. 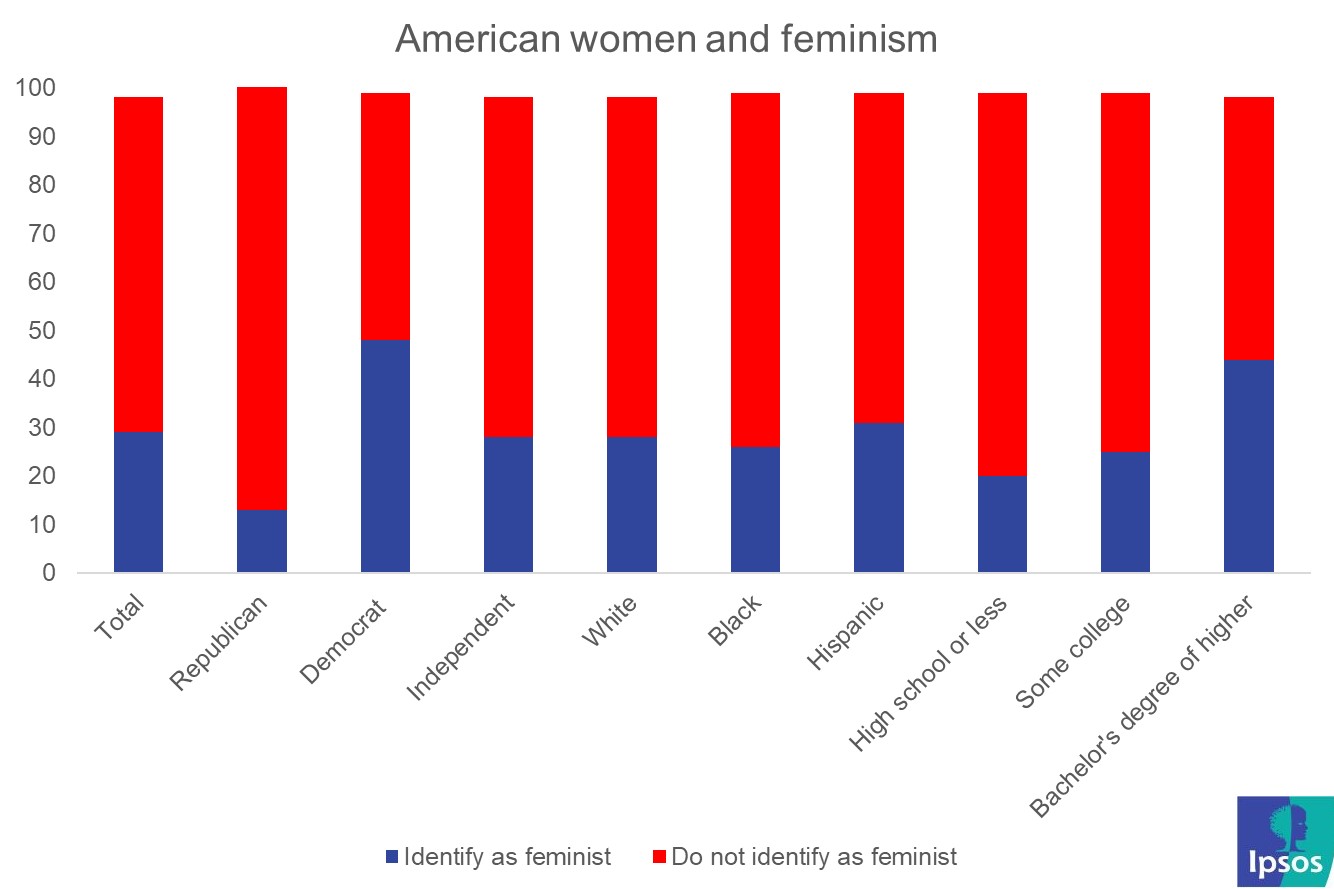 There were exceptions among certain demographics. Younger women (ages 18-29) were more likely to identify as feminists (39%); as were women holding a bachelor’s degree or higher (44%); women with no children (40%); and Democrats (48%).

Though the majority of American women do not identify as feminists, close to half would agree that women experience difficulties on the basis of their gender. Many women (40%) believe they have been discriminated against or treated unfairly.

Younger women were more likely to feel that they have been discriminated against or treated unfairly (46%) than older women. Yet the sharpest divide falls again along partisan lines, with just 26% of Republican women saying they had experienced discrimination, compared with 45% of Democrats and Independents.

More than half (53%) of American women also believe that men have it easier in the United States than women. Another 41% say that there is no difference between the genders while just 6% said that women have an easier time of it. 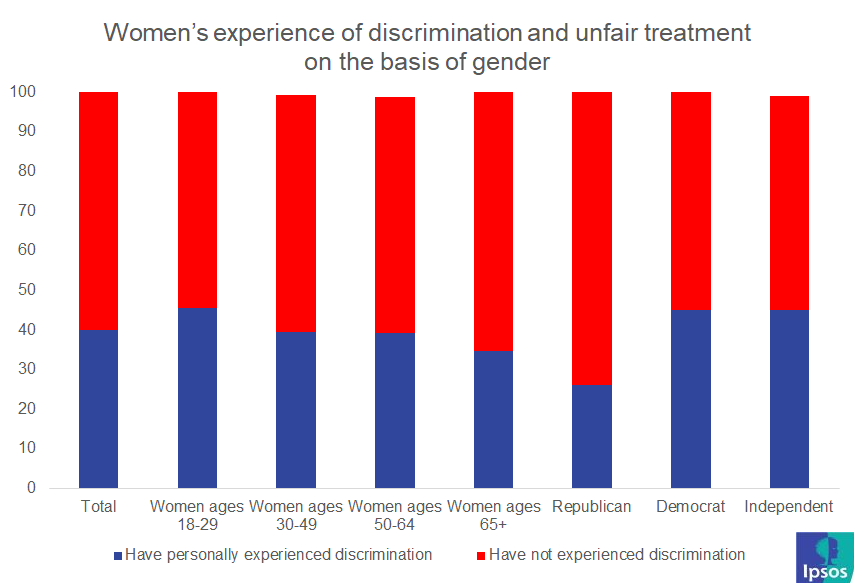 The findings raise the question: if many American women say they have experienced discrimination, what is holding them back from identifying with feminism, a principle organized around advocating for basic equality between the sexes?

Part of the problem might be that the word feminism has different connotations for different people. For some American women, it means believing in equal rights for women, regardless of their gender. For others, it might mean privileging women over men.

In other words, American women not identifying as feminists is perhaps more indicative of a lack of common agreement or understanding about what the word means, and less of a referendum on their thoughts on discrimination protections for women. After all, the National Geographic/Ipsos findings suggest that many America women have concerns about the way they are treated because of their gender.

When questions about feminism are phrased differently, women appear to be more comfortable with identifying as such. For instance, when respondents were given a more specific definition of the word (“someone who advocates and supports equal opportunities for women”) in a global Ipsos poll, 61% of American women identified as feminists.

This poll puts American women in line with the global average: 58% percent of women worldwide identified as feminists.

It could be that the word “feminism” simply fails to resonate with most American women or is perceived as a partisan issue, even if the majority agree with the basic premise that women should be protected from discrimination. 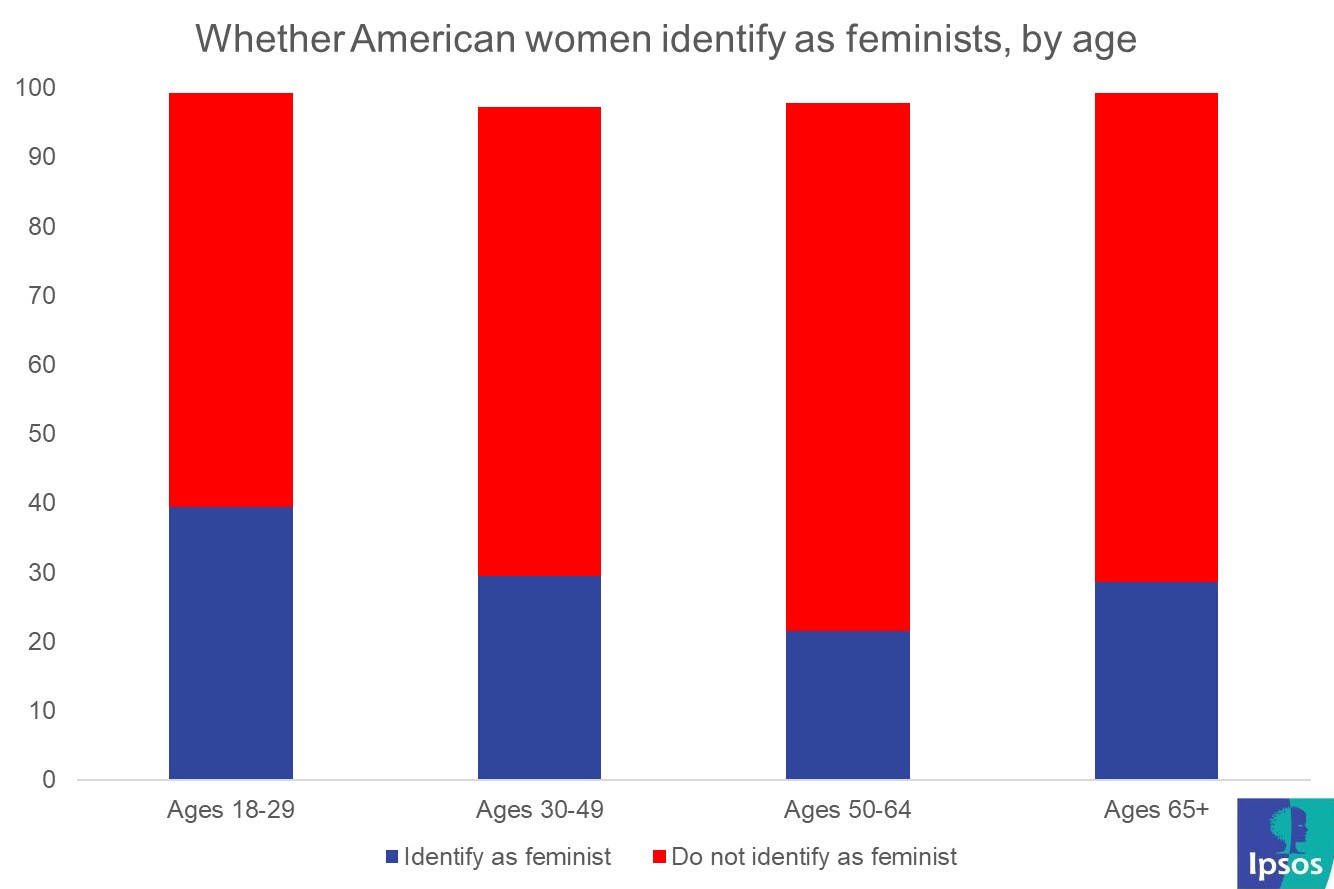 Attitudes among younger women suggest that feminism may have a brighter future. Since they are more likely to be open to feminism, over time the proportion of American women who identify as feminists may grow.