President Trump’s election ushered in a new era of American activism and civic engagement on the right and left alike, with millions participating in protests or rallies since 2016. New public opinion data from Ipsos suggests that the majority of Americans believe that there is more to come. Nearly six in ten Americans agree that there will be protests or rioting in the United States over the next year in response to how the country is being run.

Research suggests that many Americans are particularly concerned about the 2020 election cycle. Just over half of Americans (53%) believe that the 2020 election will be “open and fair,” with divisions across partisan lines, a CSPAN/Ipsos poll found (only 39% of Democrats say that it will be open and fair, compared to 72% of Republicans). Whether this uncertainty and lack of trust evolves into more serious civic unrest remains to be seen.

A breakdown of the groups most likely to foresee trouble in the year ahead hints at pockets of paranoia in contemporary America. It also paints a picture of certain key trends, from a growing divide between the haves- and have-nots, to the changing face of the modern American protest movement. 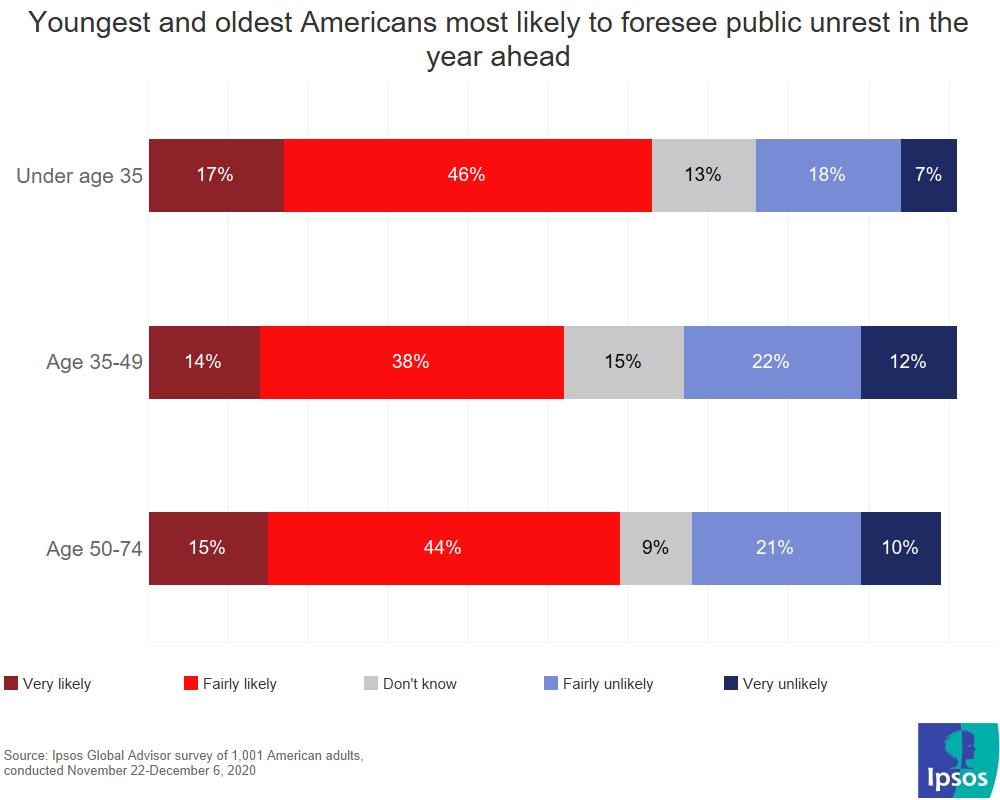 Women and millennials are politically active

Women (61%) are more likely to believe that there will be public unrest than men (55%), reflecting their growing role within public life and activist movements. There was a surge in female representation in the House coming on the back of some of the more visible and effective protest movements, such as the Women’s March and the #MeToo movement. This poll suggests that at least some American women see their activism continuing into the next year.

Notably, millennial women are now more likely to report being politically engaged than their male counterparts. According to the Brookings Institute, “This may be the first time in American history that an entire cohort of young women reports greater political engagement than their male peers,” tracking with the Ipsos finding that both millennials and women are more likely to foresee protests and unrest next year. 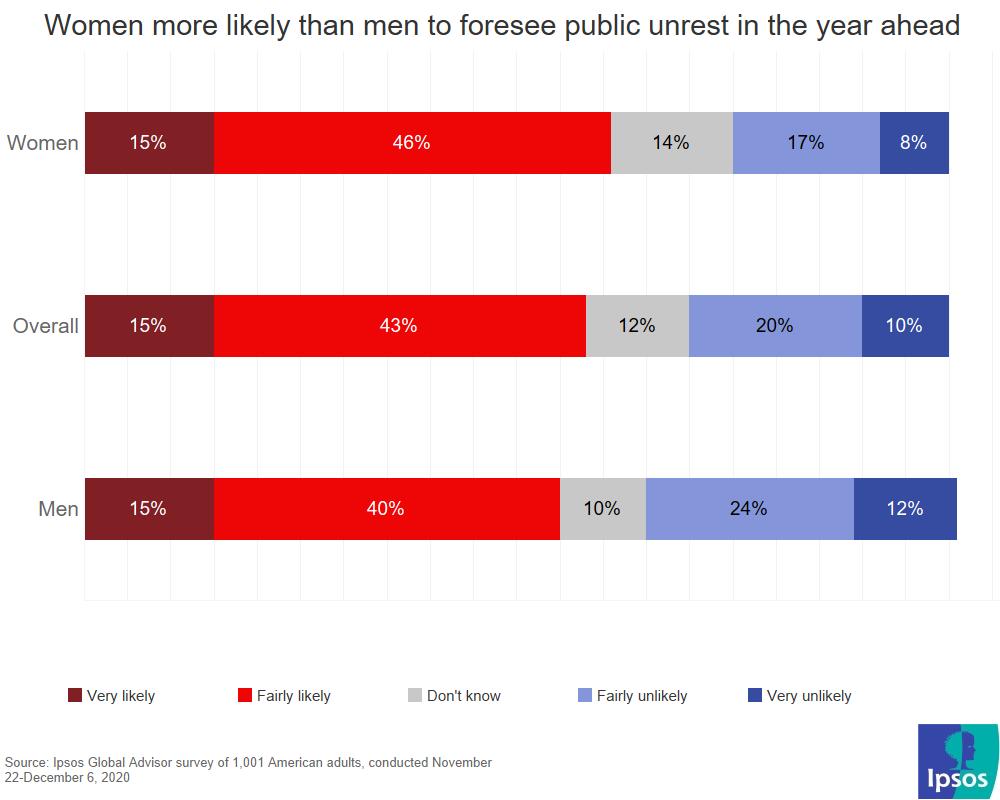 Business owners are worried about unrest

Wealthier Americans and business owners may be more afraid of unrest because they would have more to lose in the event of massive disruptions to the economy. Or perhaps they are concerned that as income inequality widens, they will become the focus of protests or rioting, à la Russian Revolution. 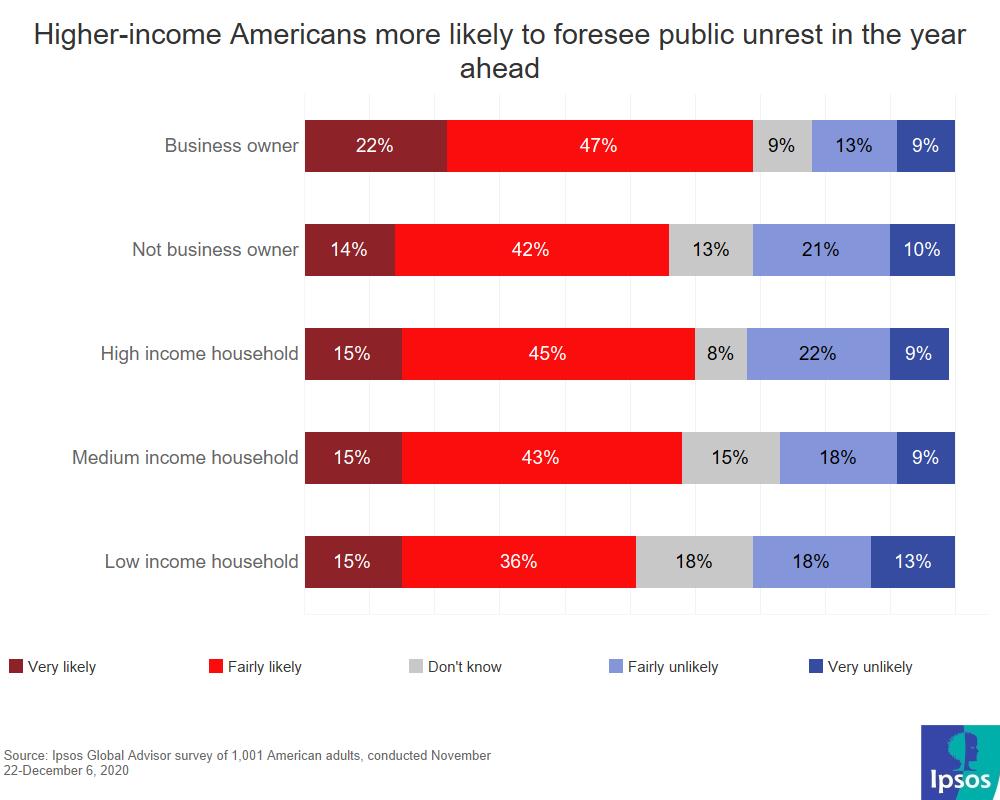 As Americans head into the next decade, there is a lot to be uncertain about, including the 2020 election and the ongoing impeachment trial of the current president. That said, political unrest is not always necessarily a bad thing. Political turbulence can lead to political engagement, a vital part of any democracy. Disagreement can be healthy.

Still, rancor across political lines and the income spectrum is a worrisome point within American politics. So too are the cracks in the system that previously kept the legislative and executive branches moving forward with something approaching a consensus. As the impeachment trial looms in the Senate, that partisan divide is on prominent display. It remains to be seen which way the winds will be blowing in 2020, and whether they will tilt the nation towards a more perfect union, or towards greater mistrust and vocal division.