New York, NY - Nine in ten (89%) U.S. adults agree that renewable energy sources, like solar energy, should be a bigger part of America's energy supply in the future, according to a new Ipsos poll of over 1,000 adults conducted on behalf of Sungevity. Many see both economic and environmental benefits wider use of renewable energy, with 81% agreeing that that reducing our dependency on coal, oil, gas and nuclear energy is the right thing to do for the environment and the economy. Similarly, seven in ten (72%) say that jobs created in the solar energy industry are better for our economy and our environment than jobs created in the coal, oil, gas and nuclear industries. 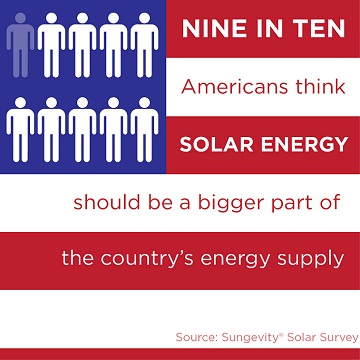 Three quarters (74%) of adults also agree that increased use of solar power will stimulate our economy by creating good-paying jobs at home. Additionally, nearly two thirds (64%) agree that the solar energy industry is creating long term American jobs that won't be outsourced in the future, more so than the manufacturing industry.

As many see economic advantages to increased use of solar power, 80% expect their elected officials to support solar energy initiatives. In fact, a similar proportion (81%) believe that regardless of who is in office, the White House and other official federal and state residences should be using solar energy. 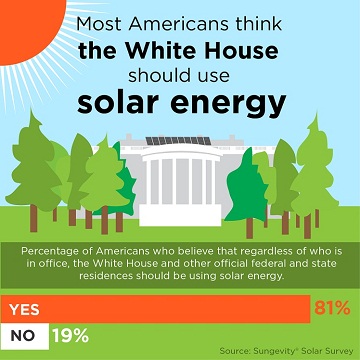 With four in five believing that the increased use of solar power will reduce household's energy costs (82%), it is no surprise that U.S. adults recognize the financial benefits of using solar energy. Eight in ten (79%) adults agree that biggest benefits that would encourage support for solar energy are financial in nature, such as reduced energy costs (60%), decreased dependence on the fluctuating cost of fossil fuels (26%), federal/state tax credits (21%) and increased home value (12%).

Fewer, 59%, select environmental benefits as top reasons for supporting solar energy, such as being better for the environment and reducing emissions (44%) and increased energy independence (28%).

Cost Is the Main Barrier to Using Solar Energy

While many see the financial benefits of using solar energy, costs are also the greatest obstacle. Eight in ten (80%) adults state that the biggest barriers to using solar energy are financial related concerns, including set up cost such as installation (72%) and difficult and costly maintenance (43%). Similarly, nearly nine in ten (87%) adults believe that the costs of incorporating and installing renewable sources of energy into homes need to decrease in order for them to be more widely used.

Adults are also apprehensive to use solar energy due to the stress in dealing with technical installation such as updating electrical systems and zoning laws etc. (47%). Other reasons for not using solar energy is the belief that it may not be available in the area (16%), it wouldn't generate enough energy (19%), they may not live in a sunny location (12%) or they just dislike the look of solar panels (10%).

Over three quarters of adults (77%) wish they could take advantage of renewable energy sources like solar energy to power their home. In fact, over half (53%) have considered incorporating renewable energy such as solar as a way of powering their home. Residents in the South (56%) and in the West (59%) are more likely have considered using solar energy than those in the Midwest (44%).

These are some of the findings of an Ipsos poll conducted September 13-17, 2012. For the survey, a national sample of 1,006 adults from Ipsos' U.S. online panel were interviewed online. Weighting was employed to balance demographics and ensure that the sample's composition reflects that of the universe. A survey with an unweighted probability sample of this size and a 100 percent response rate would have an estimated margin of error of +/- 3 percentage points 19 times out of 20 of what the results would have been if the entire population of adults aged 18 and older in the United States had been polled. All sample surveys and polls may be subject to other sources of error, including, but not limited to coverage error, and measurement error.

Ipsos has media partnerships with the most prestigious news organizations around the world. In the U.S., UK and internationally, Ipsos Public Affairs is the media polling supplier to Reuters News, the world's leading source of intelligent information for businesses and professionals, and the Hispanic polling partner of Telemundo Communications Group, a division of NBC Universal providing Spanish-language content to U.S. Hispanics and audiences around the world.

Ipsos Public Affairs is a member of the Ipsos Group, a leading global survey-based market research company. We provide boutique-style customer service and work closely with our clients, while also undertaking global research.

Visit www.ipsos-na.com to learn more about Ipsos offerings and capabilities.