Direct communications, while an invaluable tool for projecting your viewpoint to MPs, represent only one of the ways in which a company or organisation can communicate with the House of Commons. The crucial thing to remember is that MPs are just like the rest of us – they are avid consumers of mass media.

First and foremost is the fact that most MPs are keen readers of newspapers; in fact 68% of MPs regularly (three editions from every four) read two or more daily newspapers. More than half of MPs, 54%, even read more than one Sunday newspaper as well. It is crucial therefore, for any company or organisation that is setting out to affect the opinions of MPs that the Government relations team are talking to their colleagues in Media Relations. Positive coverage in the press may not alter an MP’s mind on their own, but it will certainly make them more receptive to the ideas put forward in follow-up face to face meetings or personalised communications.

Knowing what publications MPs read is therefore a key step in understanding how to both influence their opinions, and understand how their opinions are formed. As you can see from the following, the Times and Sunday Times are the most popular daily and Sunday newspapers amongst MPs. It is worth noting however that both are more popular amongst Tories than Labour, as are the Daily Mail and the Mail on Sunday. The Guardian is the most popular daily amongst Labour MPs, with The Observer the most popular Sunday paper. Interestingly though, the daily newspapers with the most cross-bench appeal appear to be the Daily Telegraph, the Evening Standard and the Metro. While the identities of the latter two are perhaps unsurprising given that they are both ubiquitous in London during commuting hours (and are free) the fact the Daily Telegraph is the third most popular newspaper amongst both Tories and Labour (and second most popular overall) will surprise some. 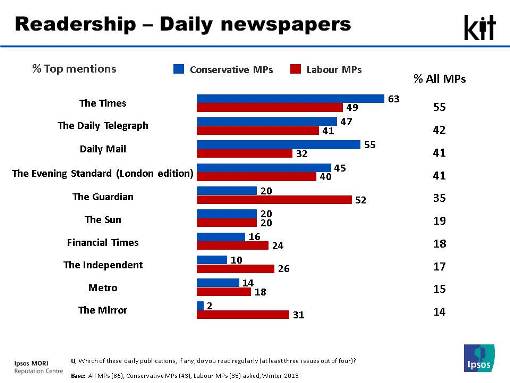 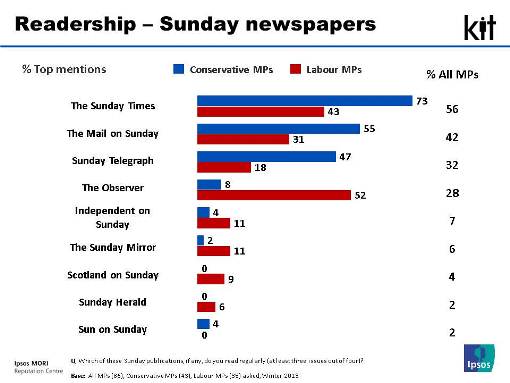 Print media is not just confined to newspapers however.  Many MPs are also avid readers of magazines and other current affairs publications, with 65% of MPs reading more than one regularly. As you can see below, MPs spend some of their time reading about their own political environment, with two fifths regularly reading the House Magazine and Total Politics, two publications that specialise in discussing what goes on in the corridors of Westminster. 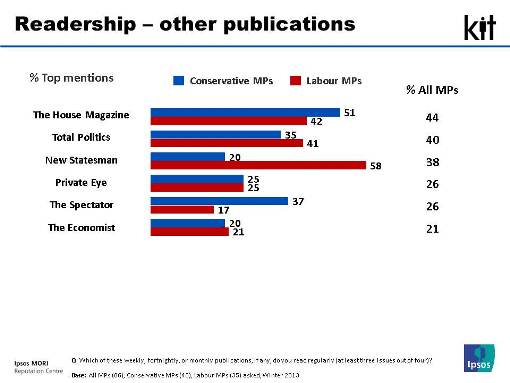 Of course the media environment these days is more than just the medium of print, and MPs, like most of us, read a wide range of current affairs and news websites. While the most popular site is their own parliament.uk – which continues the theme of MPs spending time reading about their own environment – the BBC’s website is regularly accessed by three fifths of MPs, while nearly half read theguardian.com and/or telegraph.co.uk. 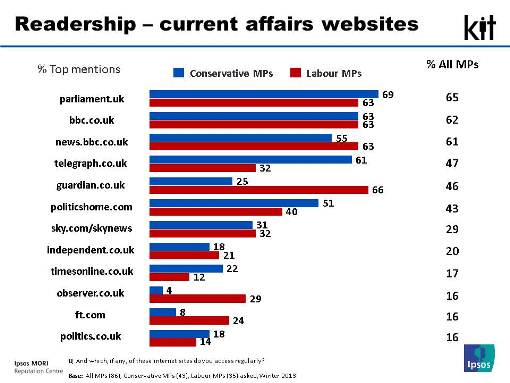 Current affairs and news sites may provide MPs with the facts they use to form an opinion but where do MPs go to read the opinions of others? Happily we have the data to hand: 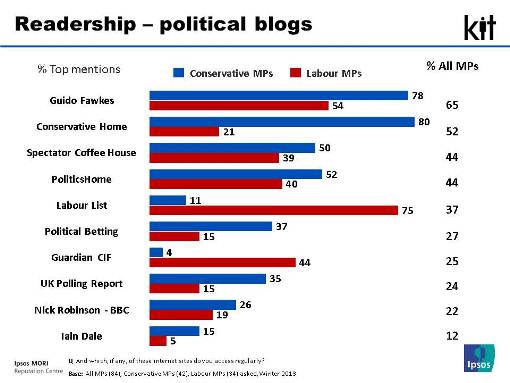 What is interesting about this is that the Conservative ‘blogosphere’ is notably better developed than the Labour equivalent. While Labour MPs are clearly devotees of Labour List, many also read the right-leaning Guido Fawkes (understandable given its status as one of the first serious UK blogs to focus on politics). Like Guido Fawkes, the Spectator’s Coffee House is widely read by both parties; while the Guardian’s Comment is Free (CiF) is ready by nearly half of Labour MPs but barely any Conservatives.

But what about social media? These days Twitter and other forms of social media are not just tracking stories in the media but also creating them. Having asked MPs about their Twitter habits several times over the past few years, it is clear that they have now realised the relevance of Twitter as a helpful social media tool. Right now 78% of MPs say that they personally access Twitter more than once a week, a huge step up from only 35% who said the same back in 2011. There is a slight party split in Twitter usage with marginally more Labour MPs than Tory MPs claiming to use Twitter more than once a week (84% vs 76%).

We have covered, in some detail, the reading habits of MPs but what about television? Many of us watch a lot of current affairs and news programmes on television, and MPs are no different. Any campaign that is relying on favourable media coverage cannot ignore television news and concentrate only on what MPs are reading on paper and screen. That said, exerting influence over television news is often harder than doing the same over their equivalents in print, and many organisations may find influencing television news beyond their scope. However, understanding what MPs watch is important and can help you to predict what type of information or opinion MPs may be exposed to.  As you can see below, MPs are keen viewers of rolling news – both the Sky and BBC news channels are widely watched (no surprise to anyone who has ever been in a MP’s office). The next most watched programmes are Newsnight and the BBC News at Ten, both watched regularly by half of MPs. Channel 4 news is popular amongst over two fifths of MPs, but ITV news is only watched by one in ten, and only a single, Conservative, MP admitted to watching Channel 5 news. 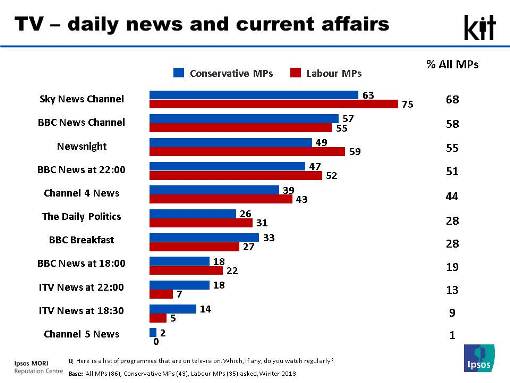 But what does all this mean for your campaign plan? As previously stated it is imperative that anyone starting a campaign designed to influence the opinions of MPs has to make sure their Media Relations team are also pushing the same message. While Westminster is quite insular, as the number of politics-focused publications and websites MPs read shows, politics in the UK does not happen in isolation from the mainstream media process. A series of favourable news stories, articles and blogs covering the topic you are campaigning for can make the difference between MPs being receptive to your arguments and being aware of the issue at hand, or being hostile to your point of view or disinterested in what you have to say. Finding a sympathetic journalist or contributor from one of the widely-read newspapers or websites highlighted in this article can make all the difference in the long run between a successful communications campaign and one that ends in failure.

The third part of this series, which will look at the criteria by which MPs judge companies and public sector organisations, will be released after Easter.