This is a big shift in public opinion when compared with the same question asked in 2011 – in particular the proportion saying we are discussing immigration too much has more than doubled from 11% then to 26% now, as the chart shows. 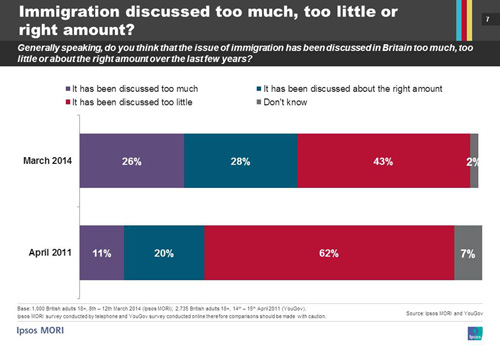 So has the greater discussion about immigration changed people’s views? The picture appears to be mixed. Our research shows that currently about one in five people (18%) agree that the government is open and honest about the scale of immigration into Britain compared with seven in ten (69%) who disagree. Our trends show that since 2003 the public does feel there is now a bit more honesty about the scale of immigration and levels of disagreement have fallen over the same period. 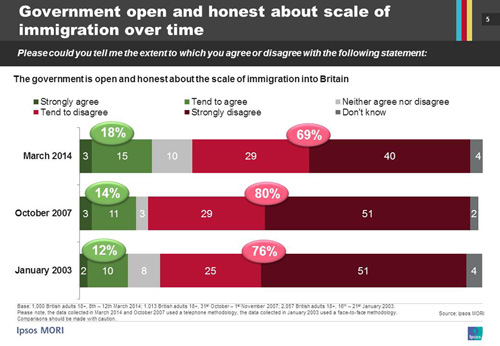 As you might expect Conservative supporters are more positive – but even here, only 27% of Conservative voters say the government is open and honest. Only 1% of UKIP voters agree.

Satisfaction with the government highest we’ve measured – but only 23% are happy, and two-thirds are dissatisfied

There has been little change in satisfaction with our latest poll in February – but at 23%, this is still the highest level of satisfaction we’ve recorded since this series started in 2006. However, dissatisfaction is also at a similar level, with still two thirds of the public dissatisfied. 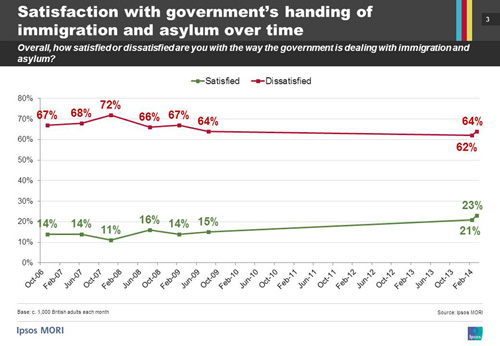 “Overall the findings show the difficulty of getting the conversation with the public right on immigration – given there are such divergent views. The trends suggest a polarisation of opinion, with an increasing proportion tired of the talk of immigration, but still significantly outnumbered by those who think the issue is not being discussed enough.And the difficulty facing the political parties in convincing those who are drawn to UKIP that they can deal with their concerns are also clear – their supporters are nearly universally unimpressed with the current government’s approaches.”