After a summer in which news coverage has been dominated by stories of the large numbers of people coming to Europe from Syria and elsewhere, Ipsos’s latest Political Monitor reveals that support for Britain’s continued membership of the EU has fallen. Just over half (52%) say they would choose to vote to ‘stay in’ if there were a referendum, compared with four in ten (39%) who would to get out. This gives ‘stay in’ a lead of 13 points, substantially down on June this year, when ‘stay in’ enjoyed a lead of 34 points (61% stay, 27% get out). Among those who give an opinion, “stay” is ahead by 57% to 43%, compared with a 69% to 31% lead in June. 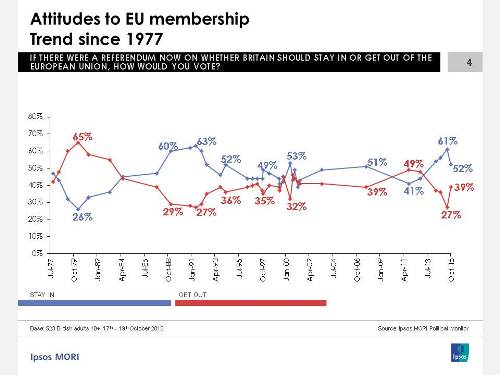 When asked the expected outcome, six in ten (62%) think that Britain will vote to stay in the EU, while 30% think Britain will leave.

That said, over half (53%) of Britons say they could be persuaded to change their mind, depending on the effects on Britain of remaining or leaving the EU. A third (32%) say they are generally in favour of membership, but could be persuaded to leave if they think that it is bad for Britain. Conversely, a fifth (21%) say they are generally opposed to Britain’s membership, but could be brought round to remain if they are persuaded of the EU’s benefits to Britain. Three in ten (29%) Britons say they are strongly supportive of the country’s EU membership and just 13% say that they are strongly opposed to it.

When it comes to some of the potential reforms from the Government’s re-negotiations, most often they will make no difference to people’s vote. Having said that, the most popular reform among ‘Leave’ supporters is the repatriation of powers to the UK parliament. A third (32%) of ‘Leave’ supporters say they would be more likely to vote for the UK to remain in the EU if this reform were secured. Restricting free movement within the EU (31%) and curbing benefits access to EU migrants (28%) were the second and third most popular sets of reforms among ‘Leave’ supporters. However, in a challenge for David Cameron, fewer than four in ten (37%) are confident that the Prime Minister will secure good deal for Britain from other European leaders during the renegotiations. 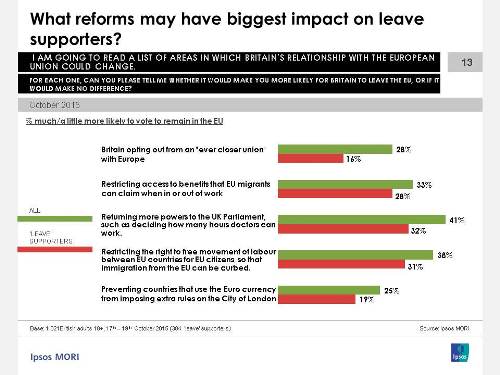 Reflecting the wide variety of views on the EU, Jeremy Corbyn (18%), Nigel Farage (17%) and David Cameron (16%) attract similar levels of trust to tell the truth during the referendum campaign. Other Conservative politicians are mentioned too. Boris Johnson is mentioned by one in ten (10%), Theresa May by 5% and George Osborne 4%. Just 2% trust Tim Farron.

Britons are most likely to trust television news (46%) to give the information they need to make up their mind during the campaign, followed by academics (36%) and newspapers (33%). Three in (31%) say they trust online sources (including social media like Facebook and Twitter) and a quarter (26%) trust business leaders. Less than a fifth (17%) say they trust politicians and just 3% trust celebrities to give them the information they need.

"It's still very early days in what looks set to be a long and fractious referendum campaign. The public haven't really turned their attention to it yet - which is clear by how many don't have strong views and say they can be persuaded. That's clearly an opportunity for both sides - but also a risk, perhaps particularly for the PM, who has set an expectation of reclaiming some power from the EU. But the ‘in’ side will be encouraged by the "wisdom of the crowd" question on what people expect to happen - the public are often uncannily accurate about how the masses will vote, and a clear majority expect us to stay."

Ipsos interviewed a representative sample of 1,021 adults aged 18+ across Great Britain. Interviews were conducted by telephone 17-19 October 2015.  Data are weighted to the profile of the population.