What You Need to Know:

The coronavirus economy is only beginning.

Stocks tumbled throwing the market into bear territory, hitting lows not seen in decades, after a historic 11-year bull run came to an end. Economists are now pushing forecasts for a recession from a probability to a near certainty, with many believing the downturn will be worse than the Great Recession.

Traders, experts, and commentators are sounding the alarm, but the indicators are only just beginning to show signs of this disruption, so where are we now and where can we expect to go? 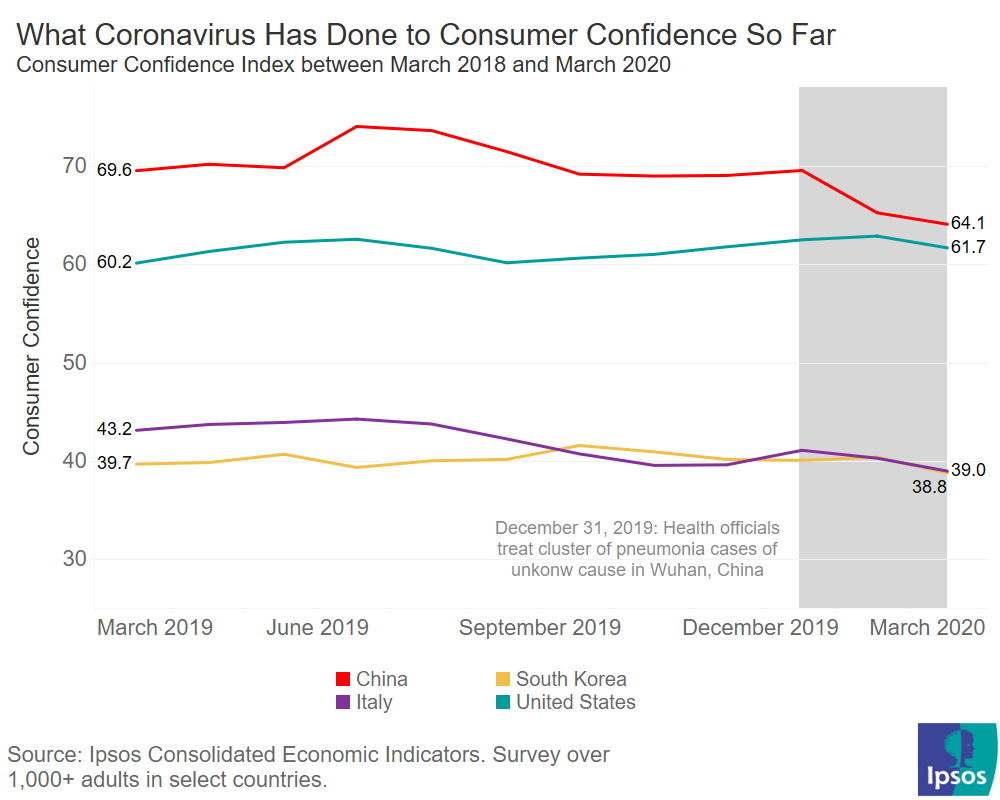 Right now, Ipsos’ tracker is picking up the calm before the storm, describing the state of U.S. consumer affairs mostly pre-COVID-19, with historically high and stable confidence. Though, we are starting to see key parts of the economy change as curfews are instituted, and schools and businesses shutter for weeks or indefinitely.

Even while, overall, U.S. sentiment look steady, expectations for the future are down. Compared to a month ago, Americans are less confident about their job security, and their ability to invest in the future. Looking ahead, fewer people believe the economy will be strong.

Already Americans are bracing for a downturn, but much like during the Great Recession, there is a lag between the economic reality unfolding and when that fully registers with consumers. As of this writing, American sentiment has only fallen by about a point.

Absent this change in the numbers, what do we know about what’s to come by looking at how life and the economy in other parts of the world have shifted with the virus?

What We Know: China 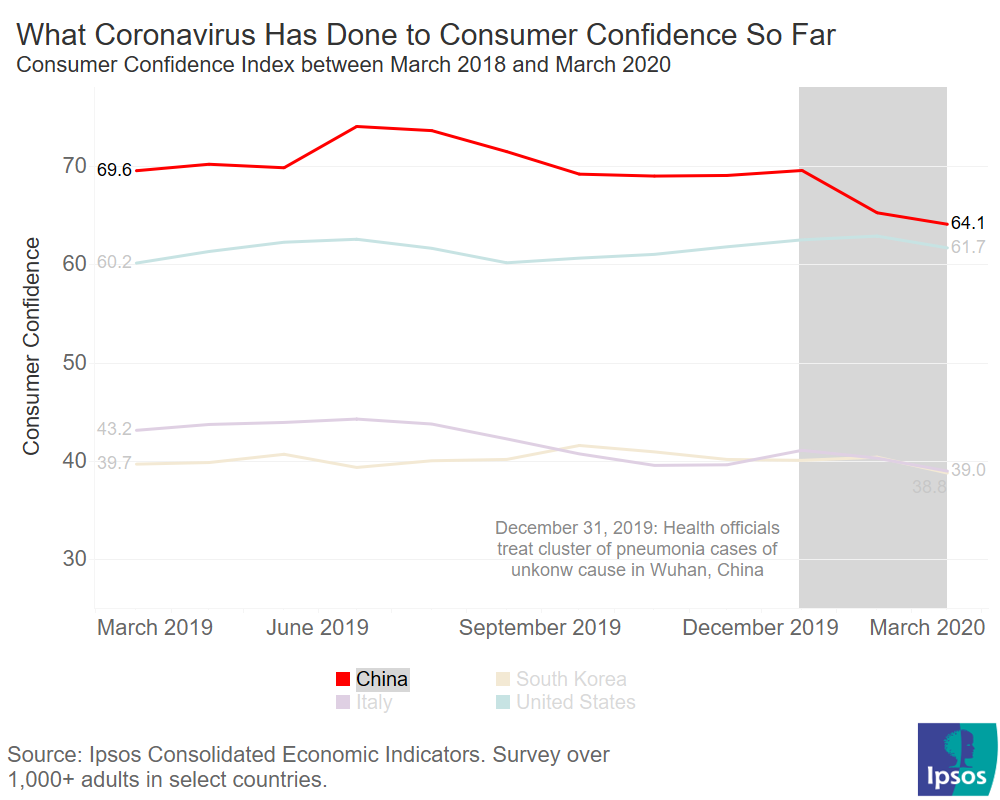 In China, consumer sentiment fell significantly within the first six weeks of the crisis. And, despite new cases of the virus slowing, confidence continues to soften.

After the country instituted strict quarantine measures for the afflicted regions, Chinese unemployment rose by a point, while industrial and retail transactions contracted by double digits. Altogether Chinese GDP is set to shrink this quarter, a first in decades.

Business closures, mass layoffs, furloughs, and historic swings in the markets are setting the U.S. up for a similar outcome.

Chinese officials were significantly more aggressive in shutting down public life and implementing state-issued quarantines than U.S. officials have been, allowing leaders to get the public health situation under control in a matter of months.

U.S. leaders have been much slower on the uptake, and even fewer Americans are reporting voluntarily changing their habits, according to a recent ABC/Ipsos poll.

Due to this delayed response, we can only expect the virus to spread farther and wider in the U.S., prolonging the economic pain of the crisis.

An important lesson for the rest of the world: even when we have eclipsed the worst of the public health crisis, the economy and consumers will still be hurting for the foreseeable future.

What We Know: Italy and South Korea 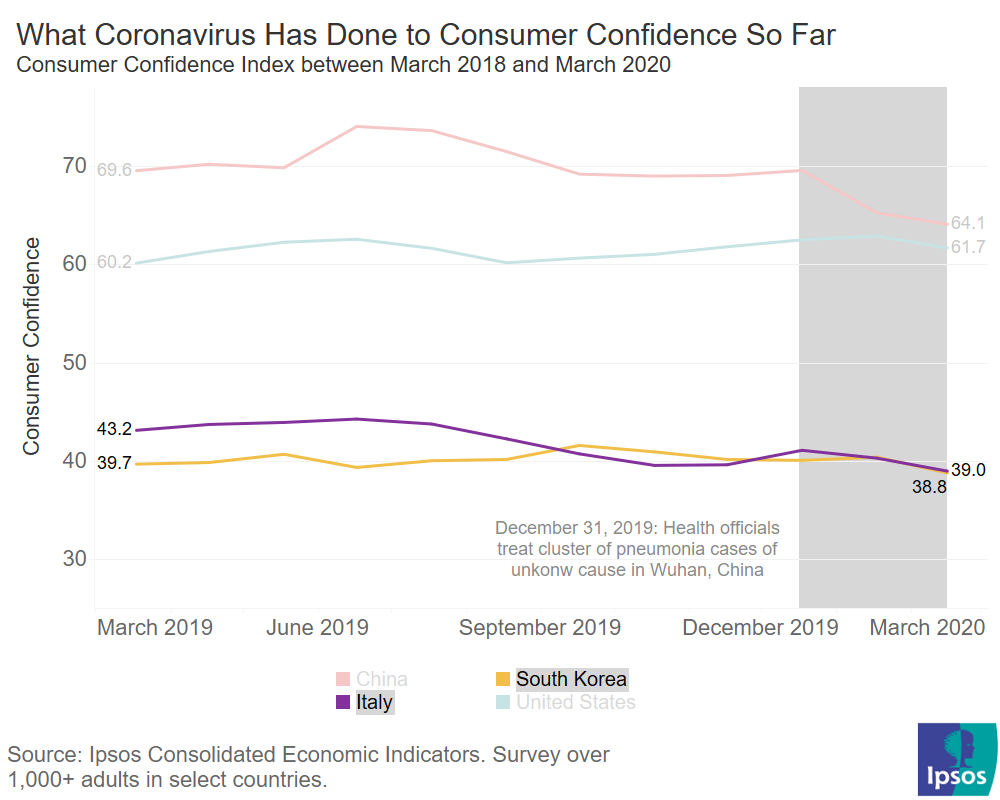 Italy and South Korea are a different story. Both countries are starting with much lower consumer confidence scores than China and the U.S., sitting right around the 40-point mark, nearly 20-points behind China and the U.S.

This puts the Italian economy in a much more precarious situation going forward given the economic headwinds present, the delayed response to the pandemic, and the continual, exponential spread of the virus now.

The halting initial response forced the Italian economy, government, and people into lockdown.

While the American economy is stronger than the Italian one heading into this, the passive preventative efforts at the beginning stages of the crisis are making the “new normal” for Italian civilians a reality for many Americans currently, and a likelihood for more going forward.

It did not have to be this way.

Despite South Korea’s relatively pessimistic consumer confidence-- one that is on-par with Italy’s-- it has not needed to pause life in the same way. New COVID-19 cases are beginning to level off, buffering South Koreans from some of the public health and economic fallout apparent in China, Italy, and increasingly the U.S.

Still, the threat of a global recession looms large for the South Korean economy because of the expected downturns in other countries.

If both the rate of the crisis and the extent of the economic damage in China and Italy is any indication, we can expect things to get worse before they get better for the United States. Government intervention can slow the pain of the pandemic, as South Korea’s rapid response shows.

From what we know about the Great Recession, and what we see in the countries that have been dealing with COVID-19 for longer, the worst is yet to come for the United States.