Americans can’t agree on a single set of facts anymore. When confronted with a particular event or situation, different groups are likely to come away with wildly disparate reactions and conclusions. Views on the recent protests against police brutality that ensued following the death of George Floyd at the hands of four police officers in Minneapolis are case in point.

Thousands of protests have taken place across the country, from tiny towns in the Utah desert to major cities, like New York, Los Angeles and Chicago. They are also far from over. Protests have been ongoing for weeks in places as disparate as Louisville, Kentucky – where Breonna Taylor killed in her apartment by police – and Seattle, Washington – where protesters have established an autonomous zone in the center of the city.

These protests, the most significant to confront the nation since the civil unrest of the 1960s, are being filtered through that same polarized lens now applied to almost every facet of civic life. Simple party affiliation isn’t the only factor driving these differences in points of view. Media consumption plays a role too. 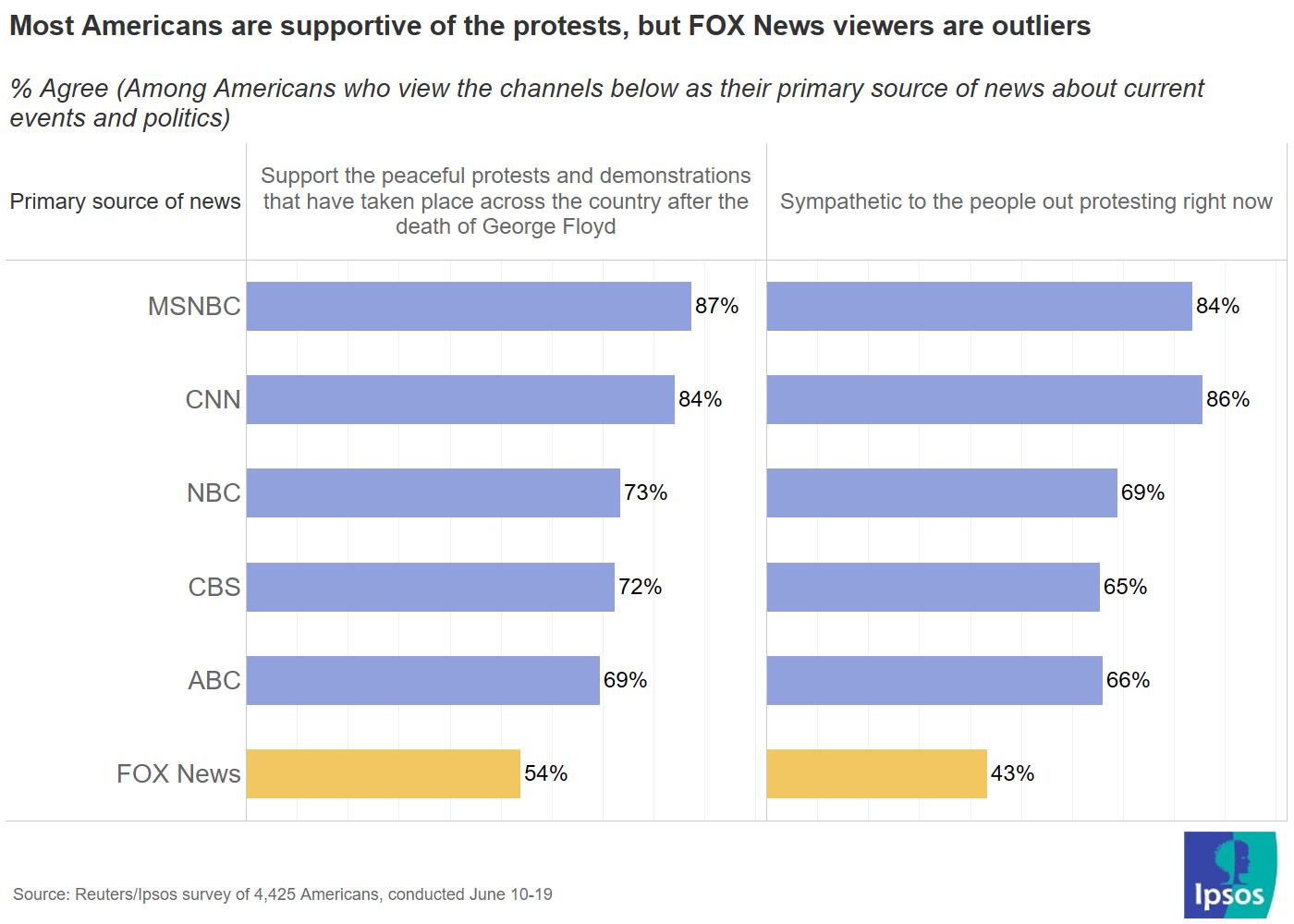 When it comes to supporting the protests or viewing the protesters as sympathetic, FOX News viewers are the clear outliers, analysis of Reuters/Ipsos data reveals. News consumption is also influencing perceptions of facts. Nearly 60% of Americans who get most of their news about current events from FOX News say that the protests are “somewhat” or “mostly” violent.

At the other end of the spectrum, 56% of MSNBC viewers and 49% of CNN viewers believe that the protests are somewhat or mostly peaceful. Perceptions of the protests tend to be fairly evenly divided across other major channels, like NBC, ABC and CBS. 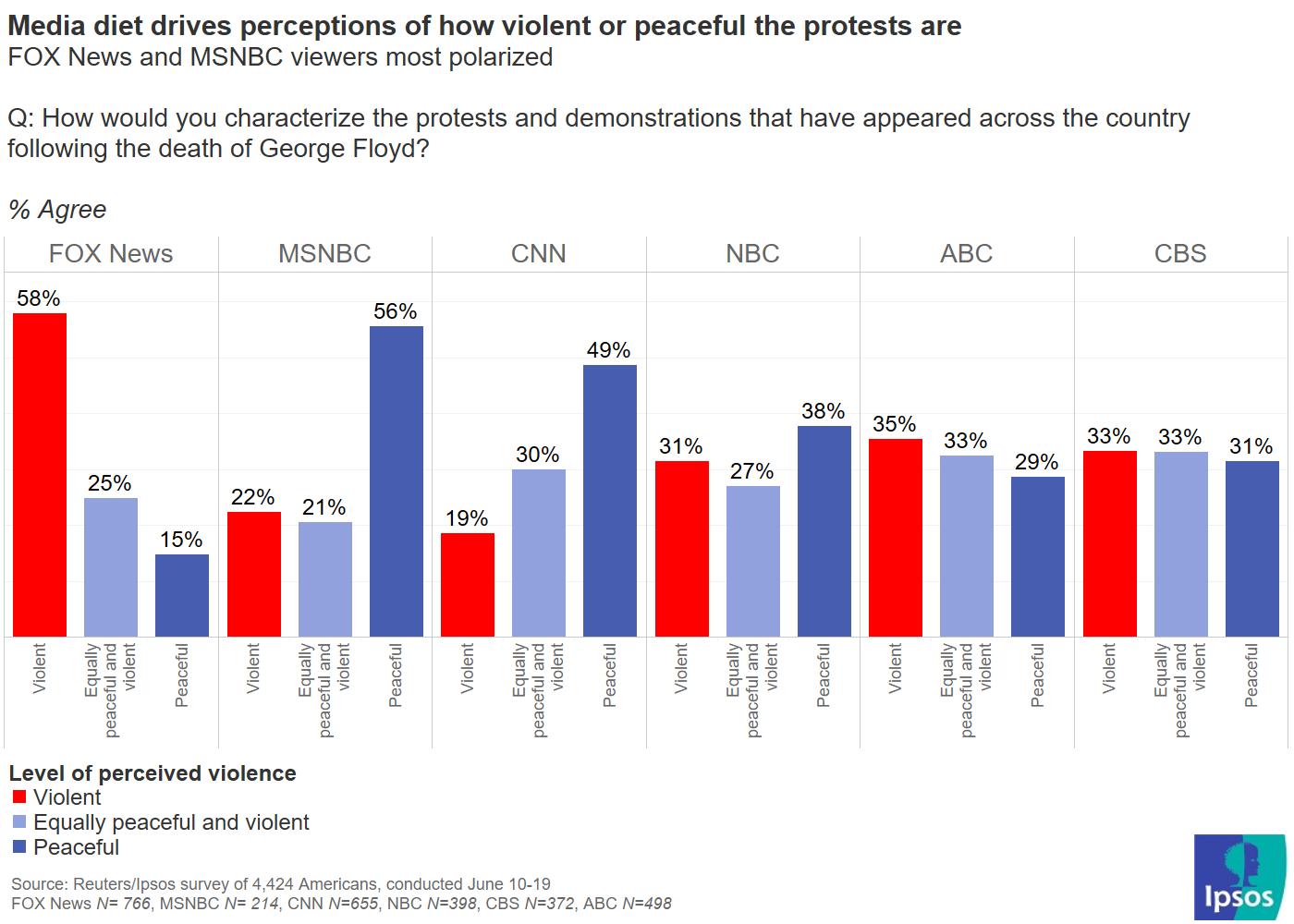 In reality, the majority of protests have in fact been peaceful. Ipsos analysis of more than 1,400 protests that have occurred since George Floyd’s death suggests that approximately 84% were peaceful. That is not to negate the very real violence and destruction that has occurred in some cities and towns, particularly during the weekend after Memorial Day. Then and since, there have been many instances of violence as tensions rise to a boiling point, either on the part of protesters, rioters and looters unaffiliated with the protests, police or counter-protesters.

Still, not all Americans can agree on this, and polarization is at its strongest when partisanship and news consumption are combined. Take the snapshot below as an example: while 53% of Republicans who do not primarily watch FOX News think the protests were mostly or somewhat violent, 67% of Republicans who look to FOX News as their primary news source say the same – a difference of nearly 10 points. A similar dynamic plays out with Democrats who turn to MSNBC as their primary channel for news about current events. Half of Democrats who don't primarily watch MSNBC for news about current events think the protests were mostly or somewhat peaceful, compared to the 65% of those who do rely on MSNBC. 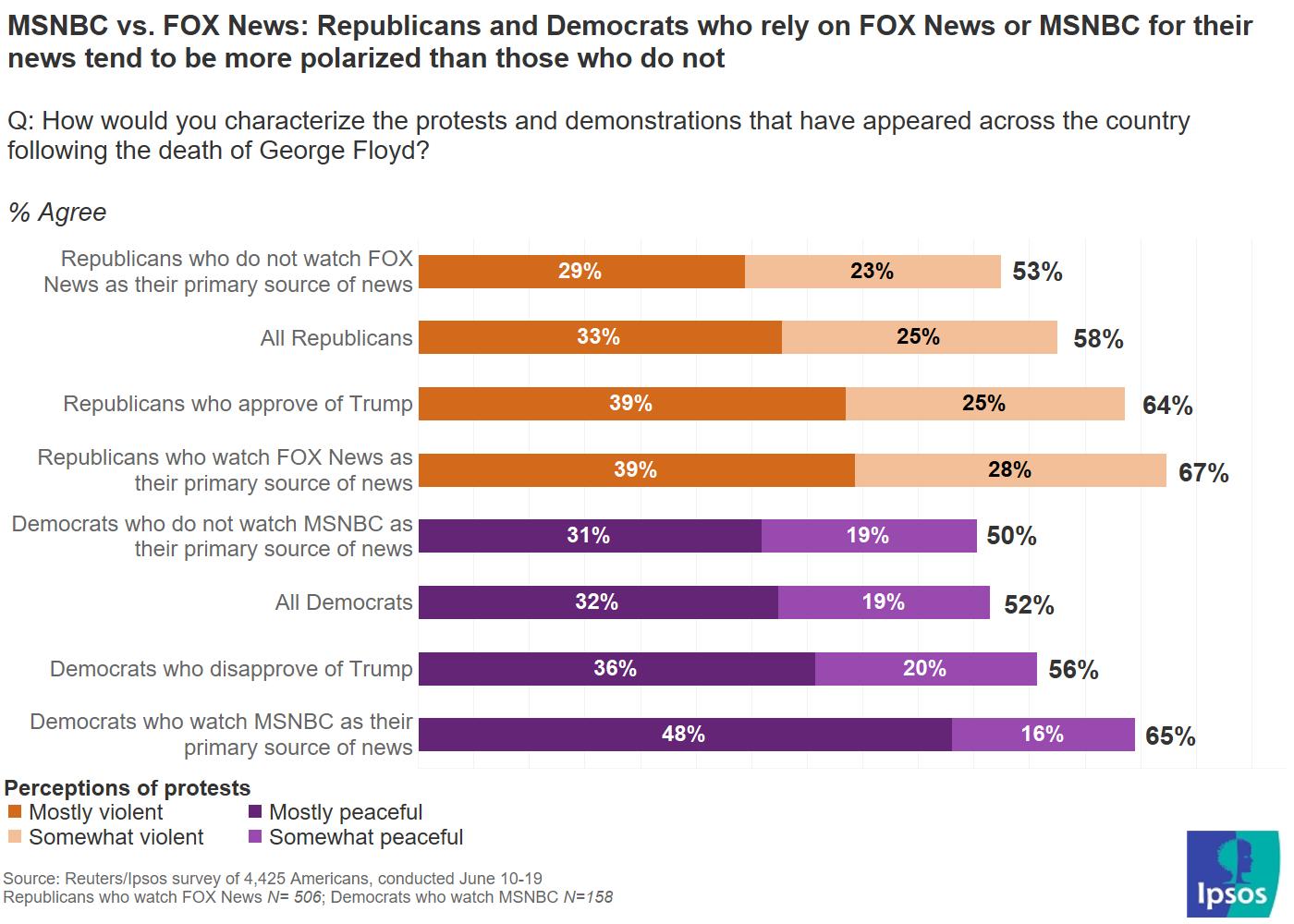 Cable news might be powerful, but it’s not the only source Americans rely on these days for information about current events. Some are reliant on social media, or even friends or family, to let them know what’s going on. But among the Americans who do trust FOX News and MSNBC, the powerful influence these networks exert is clear to see. Whether Americans feel informed by the channels they’re tuning into or they are simply confirming pre-existing beliefs about the world, these networks accurately reflect the dual perceptions of reality many Americans hold.