Understanding media consumption will be particularly critical heading into what may be an initially inconclusive election.

That is because partisans are operating in two independent sets of reality, a divide that only intensifies when media consumption is brought into the mix. 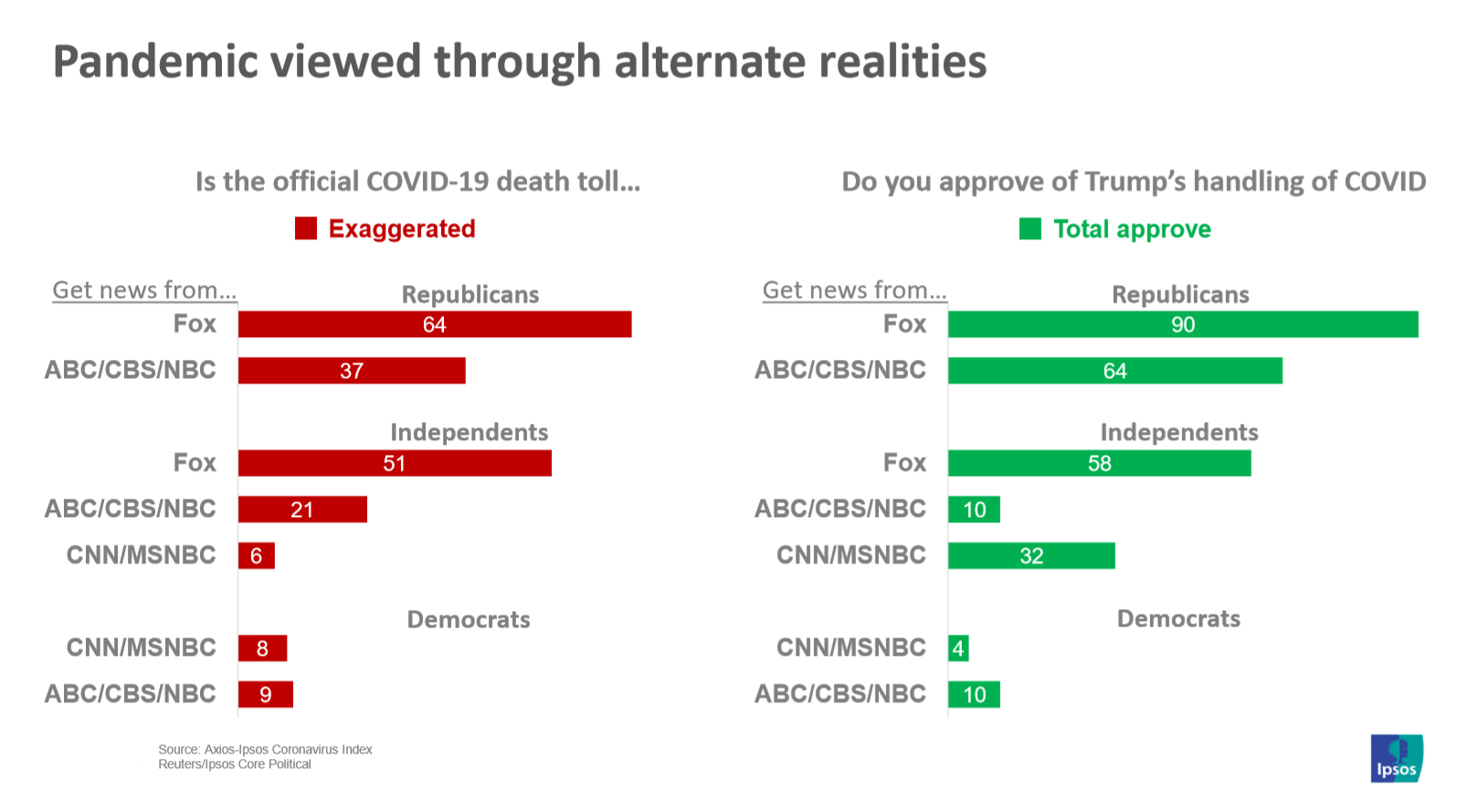 It is a truism that Republicans watch FOX News, and that Democrats gravitate towards sources like MSNBC and CNN. These are the self-reported patterns consistently seen in Ipsos polling.

But sometimes, there is a mismatch between what people actually do and what they say they do. Are some outlets claiming a greater share of Americans’ attention spans than they realize?

To get at possible discrepancies between stated and actual media consumption this election cycle, Ipsos is tracking news consumption through passive metering technology provided by RealityMine, comprised of Ipsos KnowledgePanel members who agreed to install RealityMine software on their mobile device or personal computer, or both. We then followed up with these passive metering participants to ask their stated vote intent and partisan affiliation, via a traditional survey.

This analysis finds that in the 2020 election cycle, news aggregators like MSN and Apple News are reaching the greatest number of Americans across partisan lines. Apple News is particularly successful at capturing Americans’ attention spans, accounting for the greatest share of “dwell” time on each site all three parties.  Reach represents the share of readership different sites get; dwell the time they spend on each one.

Within parties, some pronounced differences emerge, with FOX News predictably reaching more Republicans and The Washington Post reaching more Democrats. As for which non-aggregator sites have the most pull, Republicans are spending the most time interacting with outlets like FOX and USA Today, while Democrats are more drawn to The New York Times and The Washington Post. And as the presidential race enters its final weeks, Democrats have begun interacting with the polling site FiveThirtyEight much more. 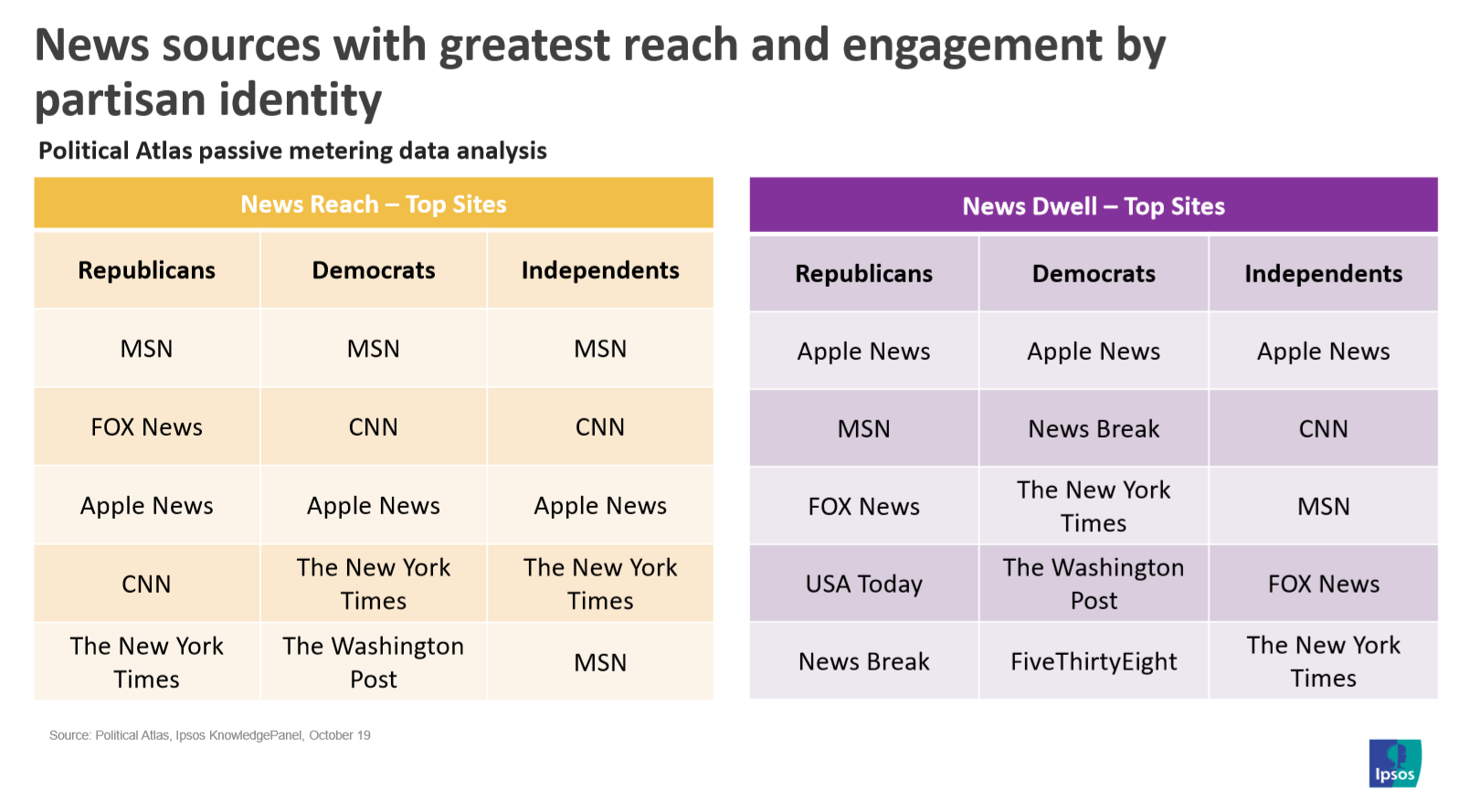 But when vote intention is factored in, this profile changes somewhat. Apple News and CNN reach the greatest share of both Biden and Trump supporters – not MSN. Among Biden voters, aggregators like News Break and SmartNews supplant outlets that Democrats gravitate towards – like The New York Times and FiveThirtyEight. Trump supporters, unsurprisingly, show an affinity for FOX News.

This analysis offers some limitations, in that it is not clear which posts or outlets people are most apt to engage with on curated platforms like MSN and Apple News. Nevertheless, it underlines the power that aggregators hold in reaching people and helping shape a narrative.

Given the intensity of emotion surrounding this election cycle, it should come as no surprise that Americans are following the proceedings closely. A strong majority of Trump supporters (81%) and Biden supporters (86%) say that they have been either very or somewhat closely following it thus far, according to a recent FiveThirtyEight/Ipsos survey.

And in the days following November 3rd, that scrutiny will likely only become more acute. With more than 90 million early votes  cast so far, tabulating the results could become a long and drawn out process. In the battleground state of Pennsylvania, for instance, final numbers might not be available until Friday. Depending how close the race turns out to be in some swing states, Biden and Trump’s respective leads could shift substantially as different waves are counted. How some Americans respond and interpret these events will likely hinge on how these outlets report out the facts.