New polling by Ipsos in the UK, taken 28-29 September shows half (51%) the public think it is likely that the Labour leader Keir Starmer will become Prime Minister, compared to a third (35%) saying it is unlikely. This has increased from two in five (38%) thinking it likely in May, and also since the start of January when fewer than three in ten (28%) thought it was likely and half (50%) thought it unlikely. 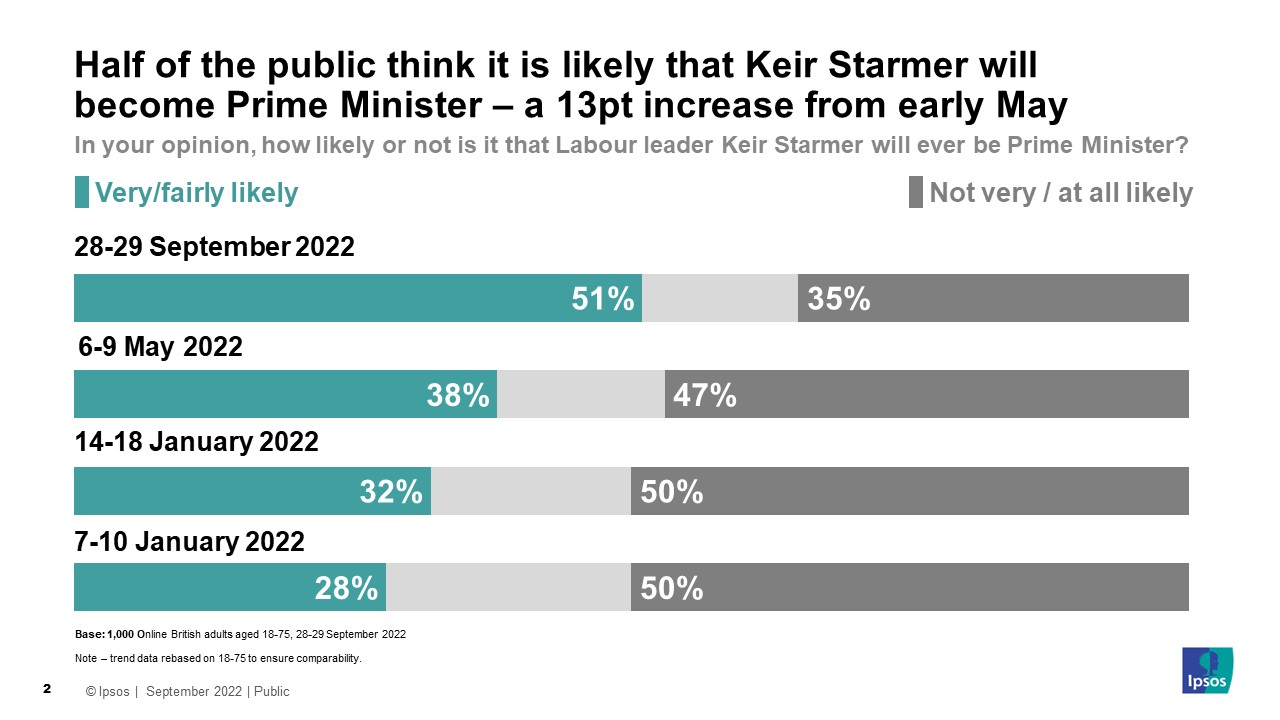 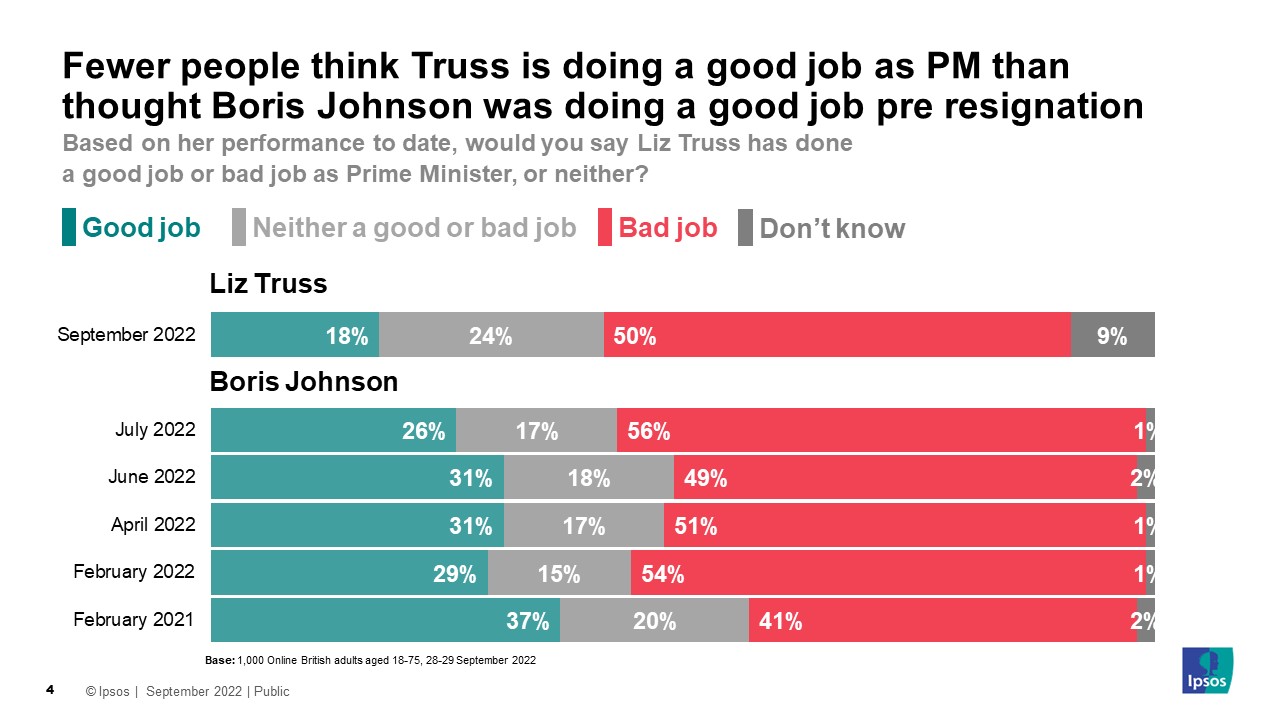 Would Labour / Sunak / Johnson do a better job than the current government?

Two in five (41%) think a Labour government led by Keir Starmer would do a better job running the country than the current government. This has increased from 36% last month (when asked about the Johnson government) and is the highest proportion saying this since Ipsos began asking the question in June 2021. One in four say a Labour government would do a worse job (24%, -1 since August) and the same proportion say it would make no difference (24%, -2). 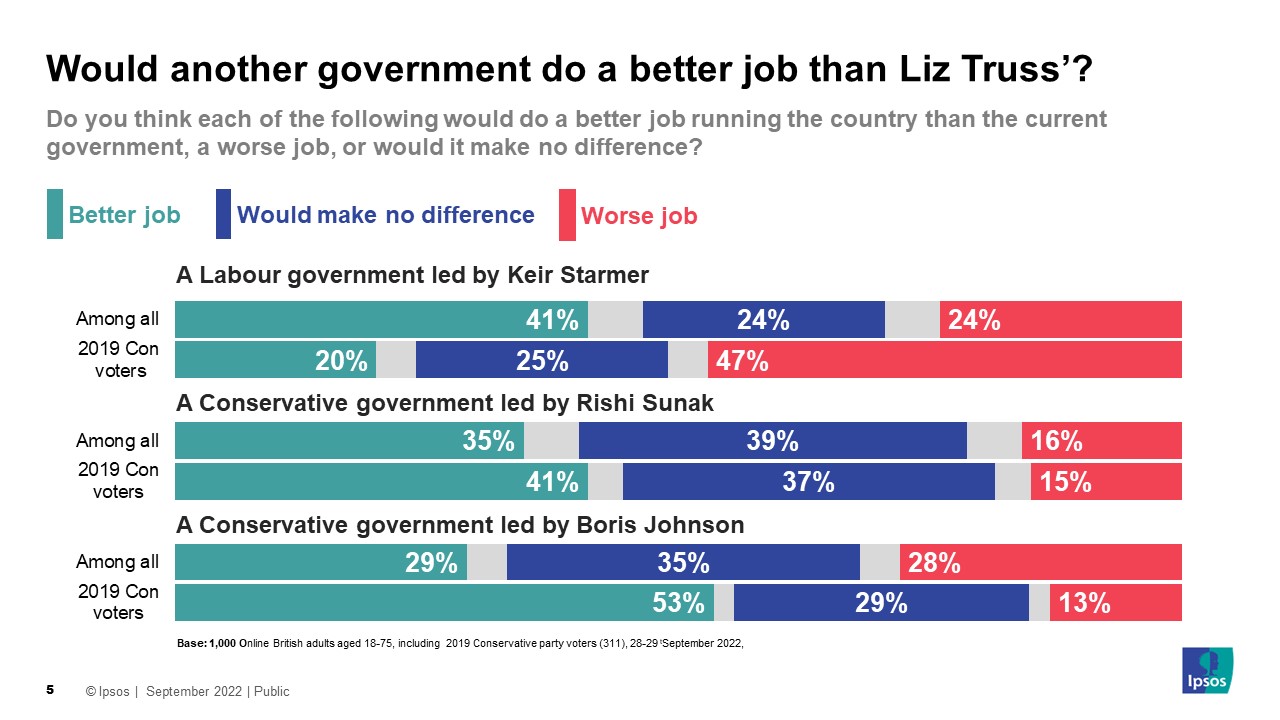 Looking at other alternatives, just over a third (35%) say a Conservative government led by Rishi Sunak would do a better job than the current government (+6 since August when asked about Johnson), whilst two in five (39%, unchanged) say it would make no difference and 16% think it would be worse (-5). The public are fairly evenly divided over whether a Conservative government led by Boris Johnson would be doing a better job (29%), a worse job (28%), or whether it would make no difference (35%). However, among 2019 Conservative voters the majority (53%) say a Johnson Government would be better.

This comes as the majority (53%) of the public support a General Election being held this year now Liz Truss is in place as Prime Minister, while just one in five (20%) would oppose it. These figures are relatively unchanged from early in the month (when it was 51% vs. 20% respectively).

These numbers suggest that it has been a positive party conference season for Keir Starmer and Labour so far. More Britons now think Keir Starmer will be Prime Minister one day and the public are increasingly likely to think a Starmer-led Labour government would do a better job in office than the current government. Time will tell if such sentiment reflects a decisive shift in Labour’s favour or merely reflects a moment in time.

Ipsos interviewed a representative sample of 1,000 Britons aged 18-75 Interviews were conducted online from 28-29 September 2022. Data are weighted to match the profile of the population. All polls are subject to a wide range of potential sources of error.