It’s no secret that Black voters, a core part of the Democratic base, back Biden over Trump by a staggering margin. A recent Washington Post/Ipsos poll put Biden 87-points ahead of Trump among Black Americans. But the Biden campaign may not be able to count on 100% of those votes in November.

Black voters want to beat President Trump on Election Day. After nearly a month of non-stop protests over police brutality and racism, and a pandemic that has disproportionately killed Black and Brown Americans, racism is at the fore for these voters. 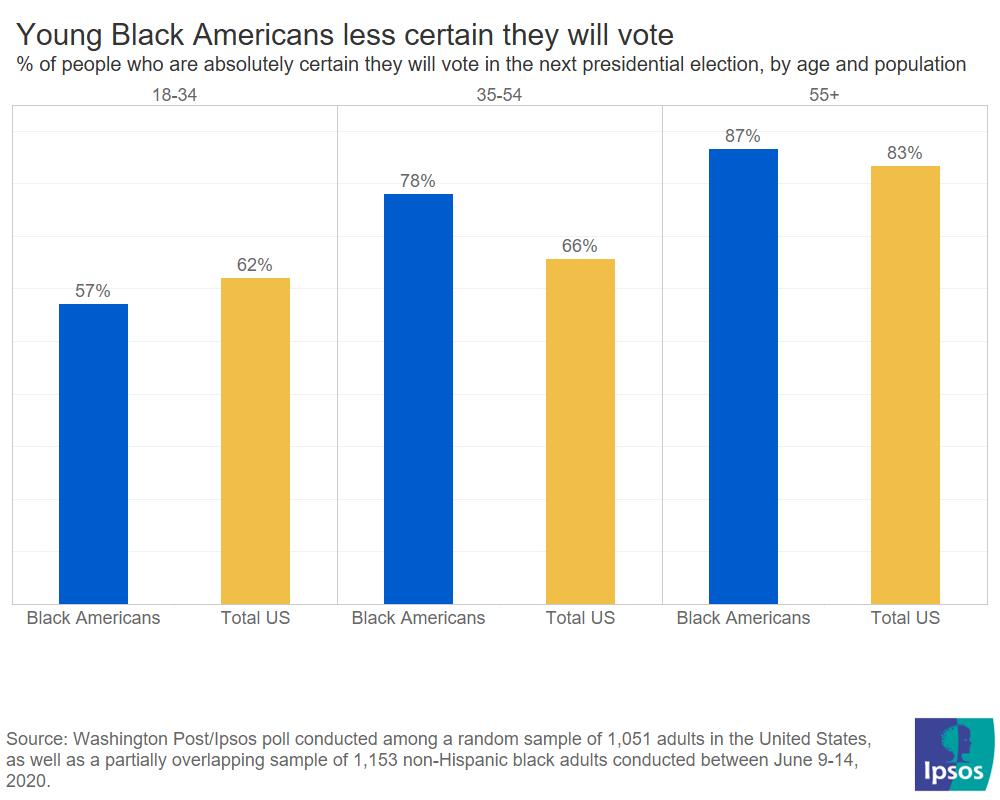 Young Black people are skeptical of Biden’s ability to effectively address some of their most pressing issues. Three-in-four (76%) Black Americans over the age of 55 believe Biden’s presidency would help reduce racism in America’s criminal justice system, while only 55% of young Black people agree with this.

This is a trend that came out during the primary. Black millennials and Gen Z’ers are moving to the left, backing candidates under a more progressive flag, like Bernie Sanders, over more typical establishment candidates, like Joe Biden.

Though, there are some signs that Biden’s VP pick could excite young voters. 55% of Black Americans under the age of 35 say that it is important to them that Biden picks a Black woman as his VP. That’s about 10-points ahead of their older counterparts.

How Biden performs here could be crucial in the coming months. Right now, Reuters/Ipsos polling shows Black voters this year are less committed to the Democratic candidate compared to where Clinton was at this point in 2016. Biden sits 9-points behind where Clinton was with Black Americans in July of 2016, with most of the difference in the undecided column. 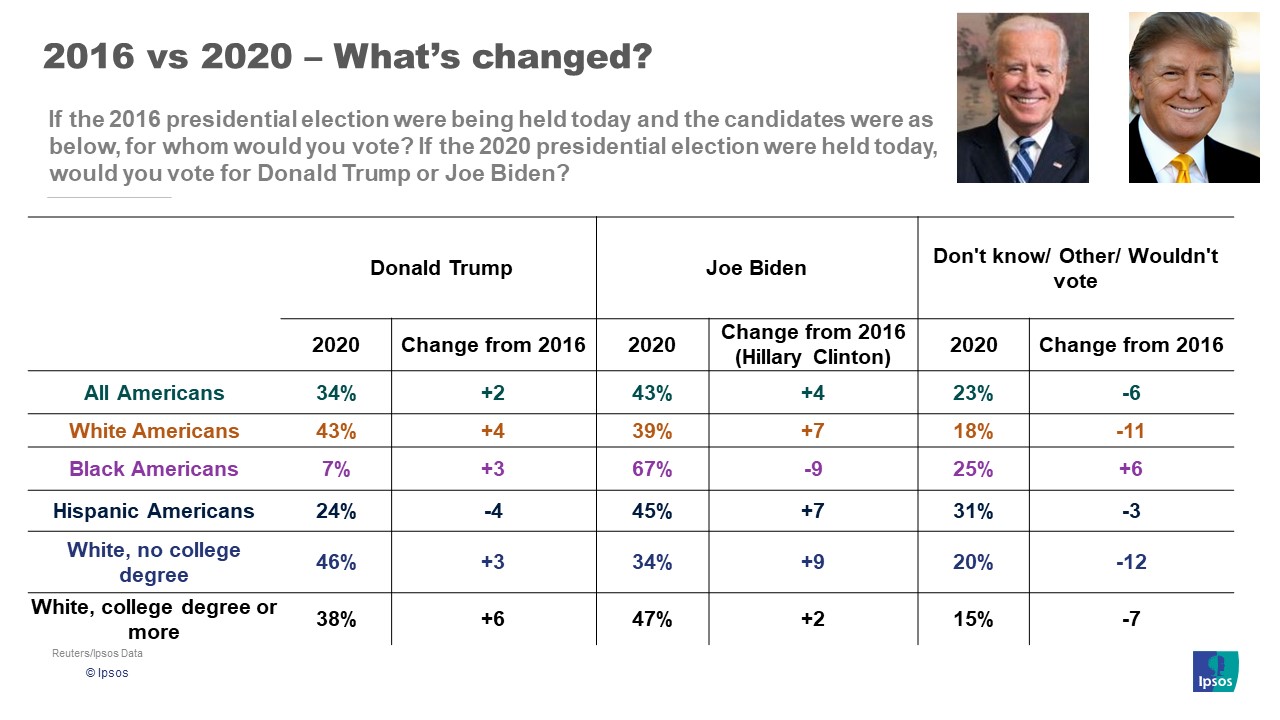 Despite this, vote enthusiasm among Black Americans rose 7-points for registered Black voters and 5-points for unregistered voters between June 2016 and June 2020. Some of the excitement is being funneled into the “Don’t know or Wouldn’t vote” group, pointing to how Biden might still have some work to do with this bloc. 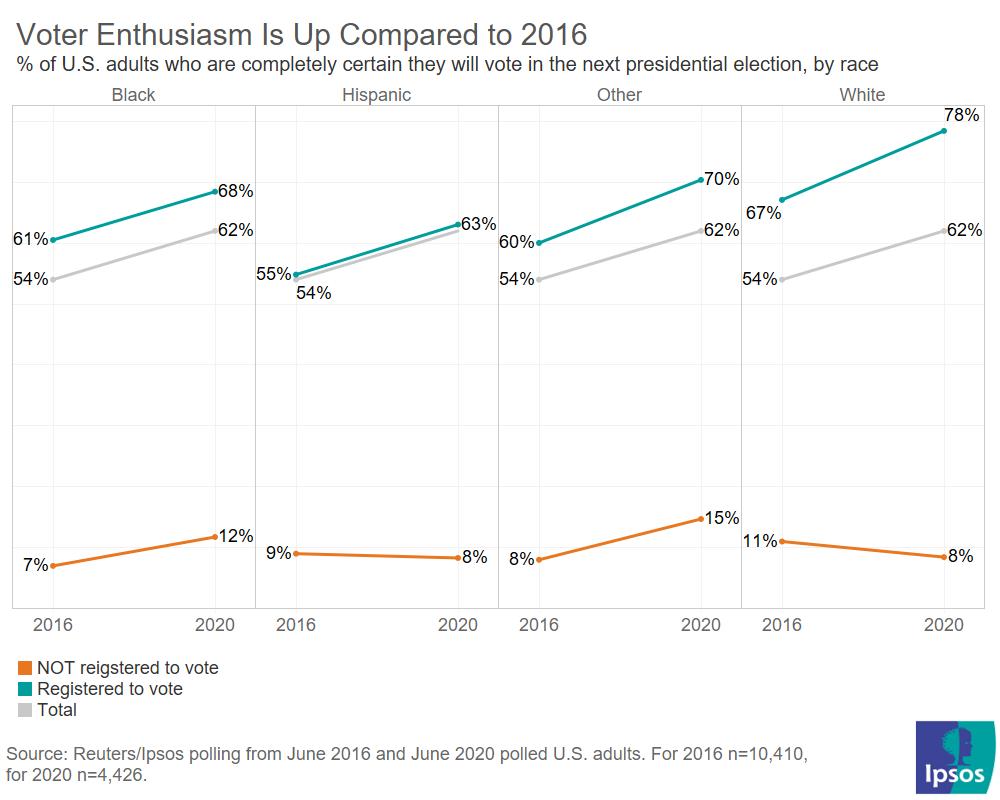 While Biden’s campaign may be struggling to excite Black voters who are on the fence, he is overperforming with groups Clinton had difficulties with in the last election. Non-college educated white Americans, Clinton’s downfall in the Upper Midwest, are a foil to the dynamics Biden’s campaign is seeing with Black Americans. Vote enthusiasm is up by nearly 11-points among all registered white voters, while the former VP is 9-points ahead of where Clinton was with non-college educated white people at this point in the last election cycle.

Still, if the second half of the year is anything like the first, a lot can still happen. Much will ride on who shows up or mails in their ballot come Election Day. Many voters are much more enthusiastic about hitting the polls heading into 2020 than they were at this time in 2016, an election many saw as a choice between the lesser of two evils.

The state of the presidential race is breaking in ways that no one could have predicted a year ago. The Black community has been hurt by COVID-19, the recession, and the never-ending cycle of racism and police brutality. The former vice president must meet the moment and echo these pains to convince Black voters his presidency won’t be more of the same should he win in November.