Thousands of protesters are marching into their eighth consecutive night of protests voicing their anger over the racist systems at play in the death of George Flyod, and many others like him.

So far, Reuters/Ipsos polling finds that majorities of Americans support the peaceful protesters.

Violence does not play well. Only about one in five Americans (22%) back violent means of demonstration.

Likewise, the president’s often violent suggestions and actions, aren’t playing well either. Twitter has hid a tweet by the president for glorifying violence; he removed peaceful protesters in front of the White House using tear gas and rubber bullets; and he threatened to bring in the military to quell unrest.

Americans responded in kind. Only a third of people support how he has led on this issue. Notably, there is a 35-point gap between black and white Americans here. 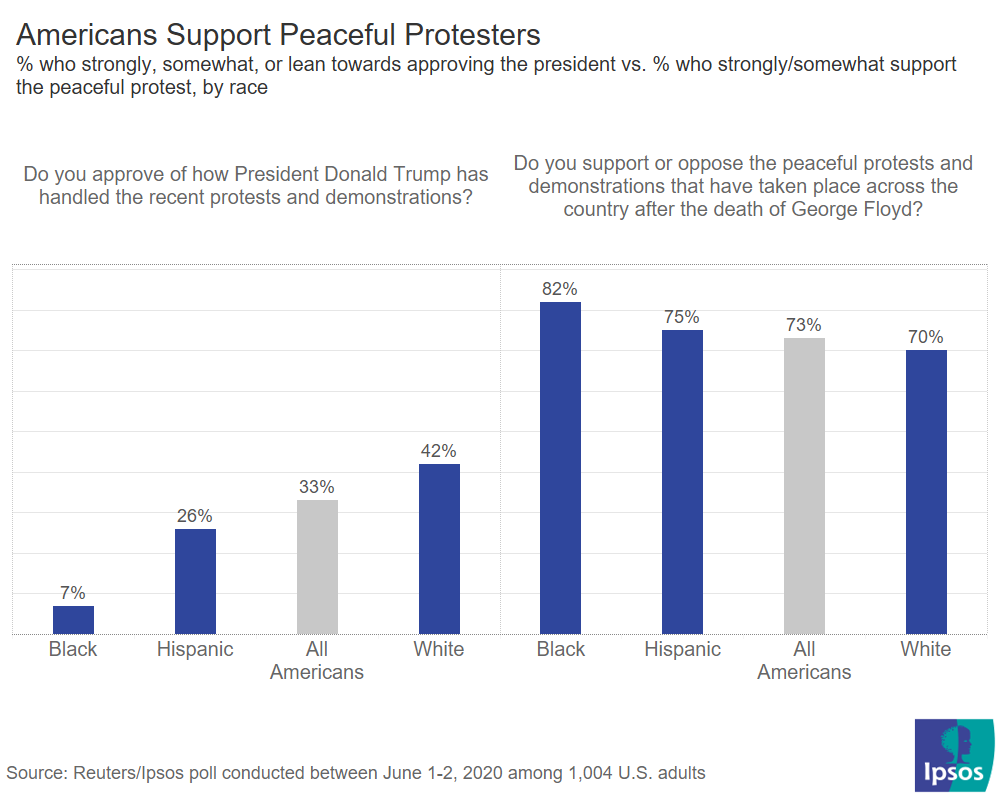 How did we get here?

Demonstrators took to the streets after a series of police killings. George Floyd’s death is the latest to enter the national view, a tragedy and injustice piling on to the disproportionate suffering of Black America during the pandemic.

The death of George Floyd in Minneapolis exposes an already painful fear and truth for many black Americans. That reality is reflected in how they see the official response to the virus, and their perceptions of law enforcement.

In fact, the Axios/Ipsos Coronavirus Index finds that 70% of black Americans are extremely or very concerned that the official response to the pandemic is biased against certain groups. That same skepticism holds for the local police. Only 36% of black respondents believe that officers look out for the best interests of them and their families. 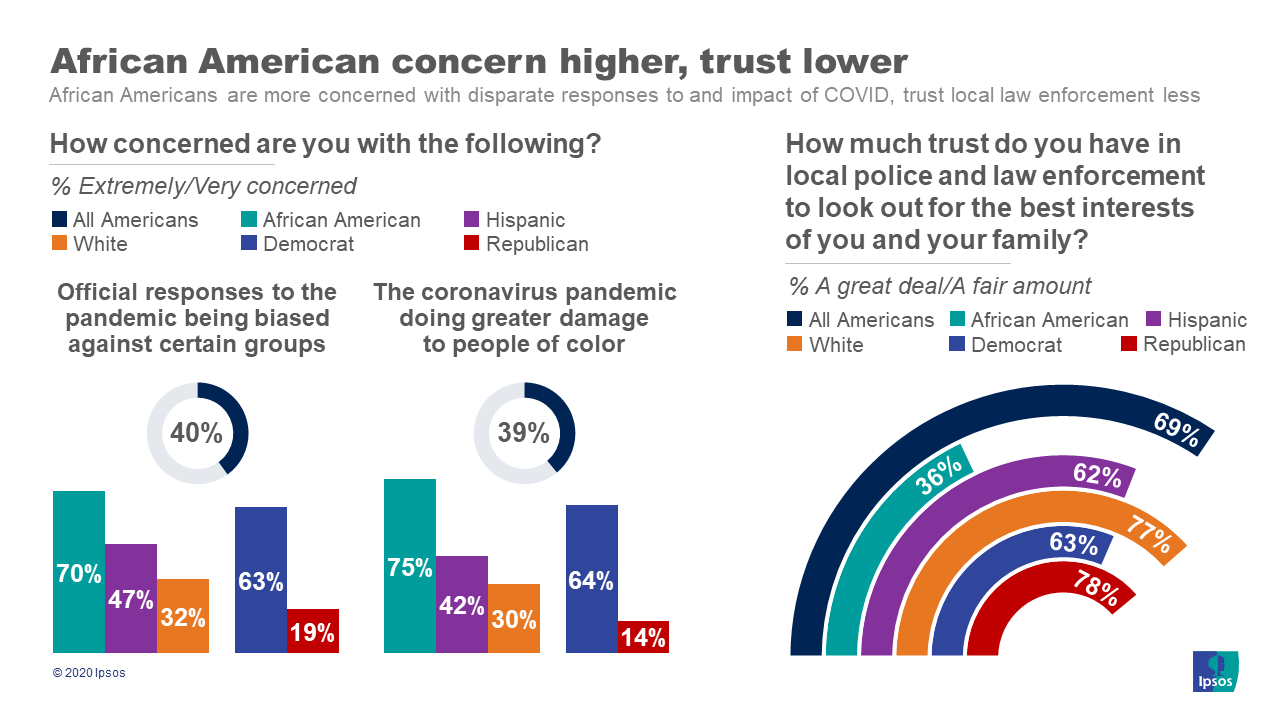 Both findings point to a reality about public health and law enforcement: the official system does not work for them.

This is not new. Before Floyd died and the pandemic began, a Washington Post/Ipsos poll conducted in January found that 83% of black Americans believe that the police do not treat all races equally.

Additionally, 78% of black respondents believe that most white people do not understand the level of discrimination that comes with being black in the U.S. That same poll found that a majority of black Americans (65%) believe it is a bad time to be black in America. 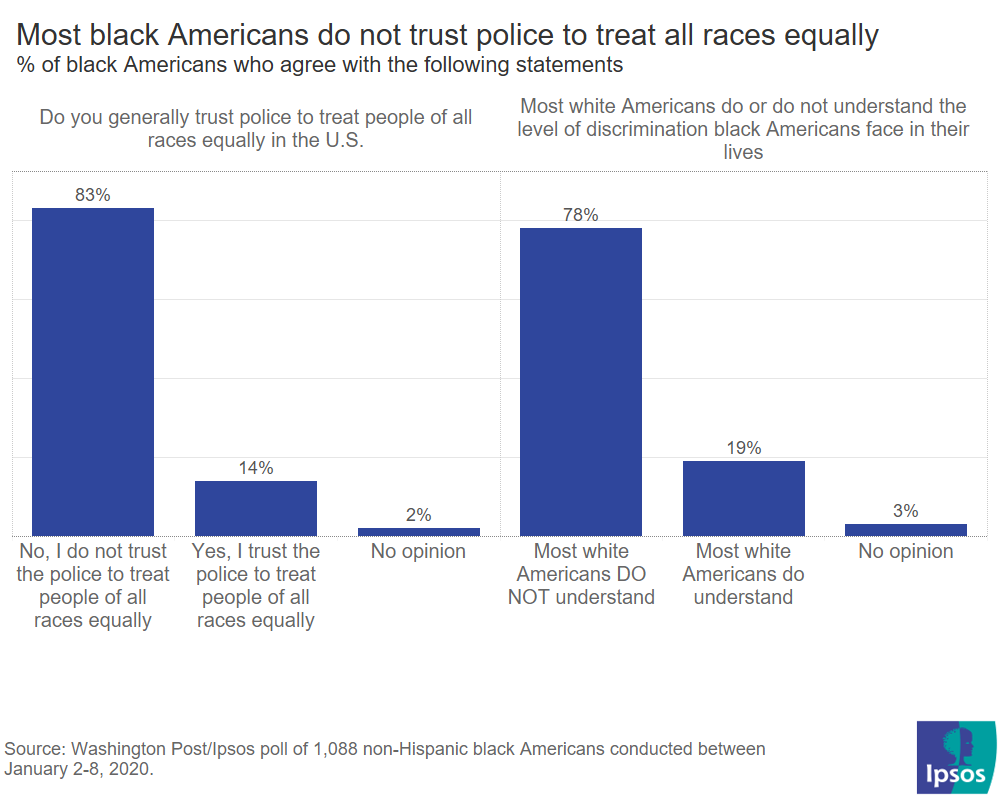 Names like George Floyd are now part of the American lexicon, adding to a roster that includes Michael Brown, Breonna Taylor and Eric Garner. Brown’s death six years ago was a watershed moment for the country. Ferguson, Missouri, where Brown died, erupted in protests after police shot, killed, and left his body in the street for hours. Scenes of Minneapolis today don’t look far off from that inflection point.

But the shape that reform takes and how effective it is remains unclear.

Since Ferguson, many reforms have been tested. Policies like putting cameras on officers hold wide support. 82% of millennial Americans back the measure, according to the Teen Vogue/Ipsos study.

Yet, body cameras don’t really stop lethal use of force by the police. In a paper published in the Proceedings of the National Academy of Sciences, a 7-month analysis of the DC police found little to no change in the use of force between officers who used body cameras and those who did not wear them.

Research shows that other tactics are more effective at curbing misuse of police power. More restrictive use-of-force policies for police departments, training officers on how to de-escalate a situation, and making it a duty to intervene by other officers on the scene should the situation turn violent can all work to reduce deadly outcomes for black Americans at the hands of the police.

Yet, even when protections are in place, tragedies are still happening. In the case of George Floyd, bystanders filmed the incident, and the Minneapolis police department had already enacted those very rules to reduce violent and deadly outcomes.

Black Americans are facing a host of painful circumstances borne out of systemic racism, both originating before COVID-19 but also exacerbated by the dual public health and economic problems the pandemic has brought out.