New York -- One in seven (14%) global citizens agree `the world will come to an end during my lifetime,' according to a new poll by global research company Ipsos on behalf of Reuters News. One in ten (10%) believe `the Mayan calendar, which some say `ends' in 2012, marks the end of the world' and another one in ten (8%) admit they `have been experiencing anxiety or fear because the world is going to end in 2012.' The poll was conducted among 16,262 adults in 21 countries.

One in ten (10%) respondents in 21 countries agree `the Mayan calendar, which some say `ends' in 2012, marks the end of the world' - 2% strongly agree, 8% somewhat agree. The majority of world citizens (90%), however, disagree with this interpretation - 73% strongly, 16% somewhat. Two in ten (20%) of those in China are in agreement with the statement, followed at the top of the global list by 13% in each of: Turkey, Russia, Mexico, South Korea and Japan. Only 4% in Germany and Indonesia seem to believe the prophecy, joined by 7% in Great Britain, South Africa and Italy. 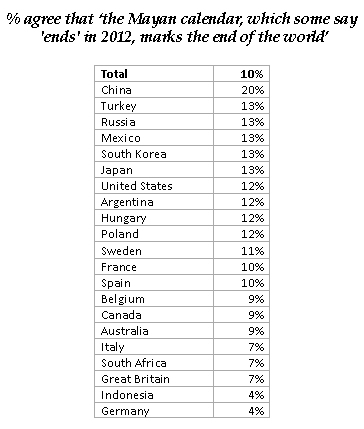 These are some of the findings of an Ipsos Global @dvisor poll conducted between March 6 and March 20, 2012, on behalf of Reuters News. The survey instrument is conducted monthly in 24 countries via the Ipsos Online Panel system. The countries reporting herein (21) are Argentina, Australia, Belgium, Canada, China, France, Germany, Great Britain, Hungary, Indonesia, Italy, Japan, Mexico, Poland, Russia, South Africa, South Korea, Spain, Sweden, Turkey and the United States of America. An international sample of 16,262 adults aged 18-64 in the US and Canada, and age 16-64 in all other countries, were interviewed between March 6-20, 2012. Approximately 1000+ individuals participated on a country by country basis with the exception of Argentina, Belgium, Indonesia, Mexico, Poland, Russia, South Africa, South Korea, Sweden and Turkey, where each have a sample 500+. Weighting was then employed to balance demographics and ensure that the sample's composition reflects that of the adult population according to the most recent country Census data and to provide results intended to approximate the sample universe. A survey with an unweighted probability sample of this size and a 100% response rate would have an estimated margin of error of ±3.1 percentage points for a sample of 1,000 and an estimated margin of error of ± 4.5 percentage points for a sample of 500 19 times out of 20 per country of what the results would have been had the entire population of the specifically aged adults in that country been polled.

For all Reuters/Ipsos Polls go to: http://www.ipsos-na.com/news-polls/reuters-polls/

For information about Ipsos and access to all Media and Polling Releases go to: http://www.ipsos-na.com

Thomson Reuters is the world's leading source of intelligent information for businesses and professionals. We combine industry expertise with innovative technology to deliver critical information to leading decision makers in the financial, legal, tax and accounting, healthcare and science and media markets, powered by the world's most trusted news organization. With headquarters in New York and major operations in London and Eagan, Minnesota, Thomson Reuters employs more than 50,000 people and operates in over 100 countries. Thomson Reuters shares are listed on the Toronto Stock Exchange (TSX: TRI) and New York Stock Exchange (NYSE: TRI). For more information, go to www.thomsonreuters.com