Washington, DC, March 5, 2021 — Ahead of the trial of Derek Chauvin, the police officer charged with the murder of George Floyd, and the one year anniversary of the death of Breonna Taylor, a new USA Today/Ipsos poll shows shifting views among the American public when it comes to trust in law enforcement and Black Lives Matter, the right to protest, and the circumstances around Floyd’s death last May.

In comparison to a USA Today/Ipsos poll from last June, which was conducted as protests unfolded outside of the White House, Americans now are much less wedded to protecting the right to protest, perhaps indicating that the events at the U.S. Capitol on January 6th may still be fresh in people’s minds. Furthermore, trust in law enforcement and police unions has grown, while trust in Black Lives Matter has declined. Finally, when it comes to the circumstances surrounding the death of George Floyd, fewer characterize it as murder, while more are simply unsure. In spite of this, a majority of Americans hope Chauvin is convicted.

1. As more Americans now wish to preserve law and order over the right to protest, they are also more trusting of law enforcement, less trusting of Black Lives Matter, and continue to support fully funding police departments. 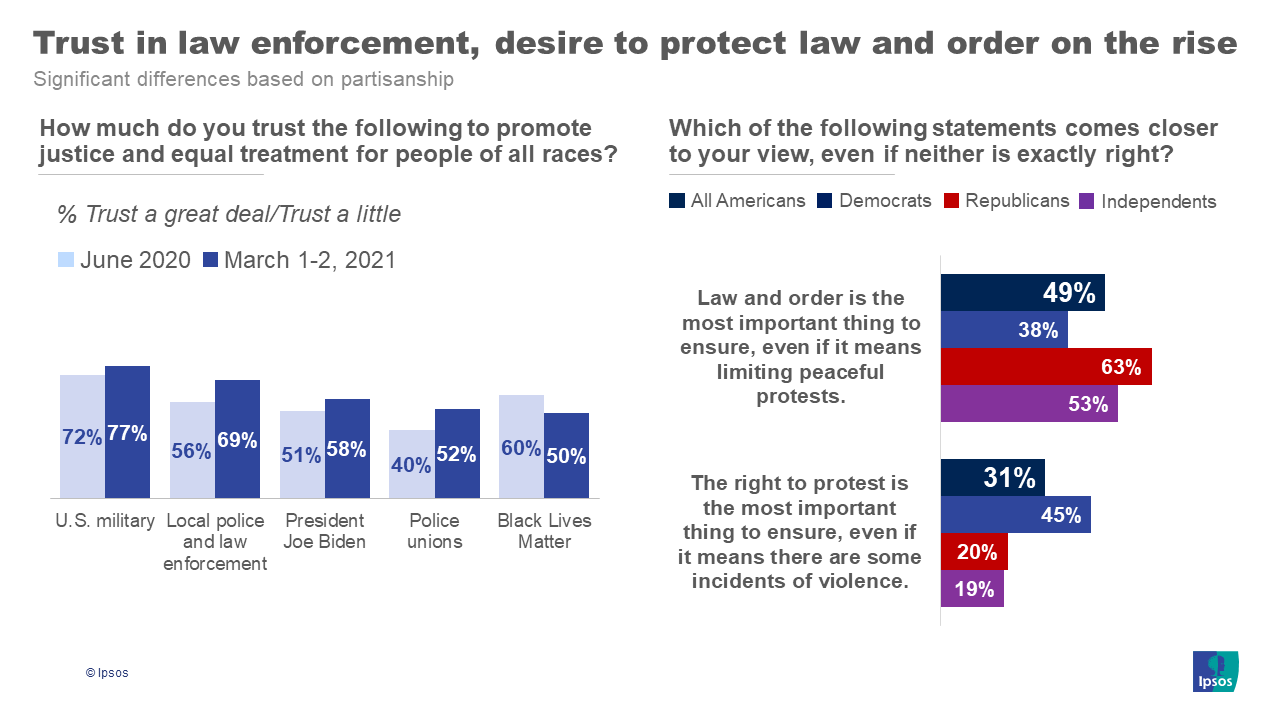 2. As we are more removed from the protests that took place over the summer, the public’s views are a bit less crystallized than they were last year. Now, more Americans are unsure about various issues related to racial injustice and civil unrest.

3. In the past year, significantly more Americans feel race relations in this country have worsened rather than improved. In addition, there are significant racial and partisan divisions on issues ranging from defunding the police, to equitable treatment of Black Americans, to trust in law enforcement.

4. A bare majority supports reforming the police, but there is little support for the “defund the police” movement. Furthermore, when forced to choose, more Americans wish to fully fund the budget for police in their community.

These are some of the findings of an Ipsos poll conducted between March 1-2, 2021 on behalf of USA Today. For this survey, a sample of 1,165 adults age 18+ from the continental U.S., Alaska, and Hawaii was interviewed online in English. The sample includes 788 white Americans, 178 Black Americans, 598 Democrats, 374 Republicans, and 135 Independents.

The sample was randomly drawn from Ipsos’ online panel, partner online panel sources, and “river” sampling and does not rely on a population frame in the traditional sense. Ipsos uses fixed sample targets, unique to each study, in drawing a sample. After a sample has been obtained from the Ipsos panel, Ipsos calibrates respondent characteristics to be representative of the U.S. Population using standard procedures such as raking-ratio adjustments. The source of these population targets is U.S. Census 2018 American Community Survey data. The sample drawn for this study reflects fixed sample targets on demographics. Post hoc weights were made to the population characteristics on gender, age, race/ethnicity, region, and education.

Statistical margins of error are not applicable to online non-probability polls. All sample surveys and polls may be subject to other sources of error, including, but not limited to coverage error and measurement error. Where figures do not sum to 100, this is due to the effects of rounding. The precision of Ipsos online polls is measured using a credibility interval. In this case, the poll has a credibility interval of plus or minus 3.3 percentage points for all respondents. Ipsos calculates a design effect (DEFF) for each study based on the variation of the weights, following the formula of Kish (1965). This study had a credibility interval adjusted for design effect of the following (n=1,165, DEFF=1.5, adjusted Confidence Interval=+/-4.8 percentage points).