With oil prices forecasted to stay low for the foreseeable future, economic outlook for 2015 has to be revised, especially for nations that rely heavily on natural resources production such as Russia, Saudi Arabia, Canada and the United States.

The contrast between the United States and Russia in terms of how each nation views their national economy is stark, especially given the US led sanctions against the Putin government for its support and involvement in the Crimea. The US economic confidence is on a tear—up 14 points (to 44%) in 2014 as its economic engine has kicked into gear. By comparison, the national economic confidence in Russia has plummeted 23 points (to 36%) from 59% in August, 2014.

The three amigo’s of Latin America surveyed each month (Brazil, Argentina and Mexico) have all clustered around the 20% confidence range—an especially stunning slide over the past two years for Brazil which was heralded as one of the new world economic engines not so long ago.

Europe is in a holding pattern (this snapshot taken before the recent terrorist attacks in France and related activities in Belgium) while Turkey is on a negative watch for next month.

India remains very strong (four months at 80+ percent) with China on a positive, if occasionally erratic, path back to strong economic sentiment—up eight points (to 71%) over the year.

Despite great unrest in the Middle East, Egyptian's continue to rise positively in the assessment of  their economy.

Global Average of National Economic Assessment Down One Point: 39%

Continuing on the downward trend started last month, the average global economic assessment of national economies surveyed in 24 countries is down one point as 39% of global citizens rate their national economies to be ‘good’ (and down from 41% since October 2014.) 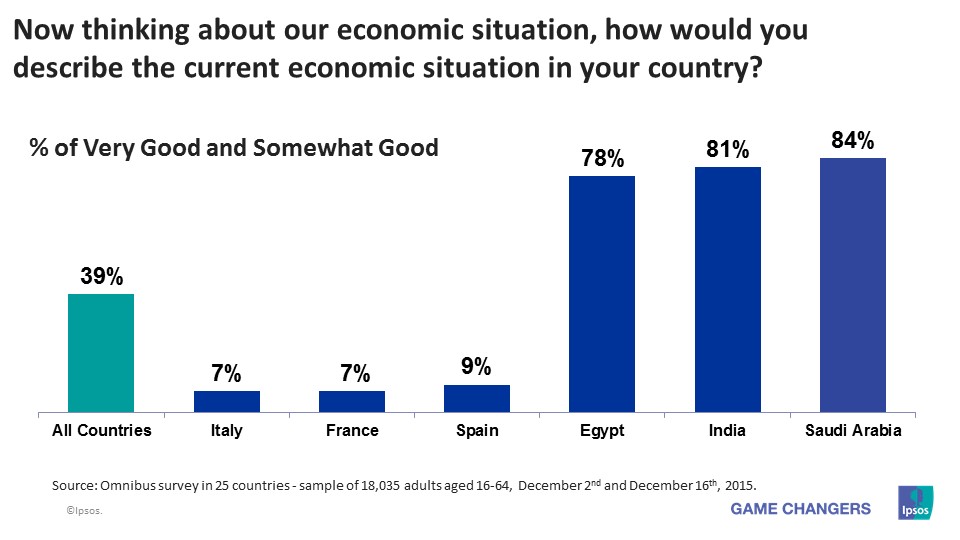 Global Average of Local Economic Assessment (28%) Down One Point

When asked to assess their local economies, 28% agree the state of the current economy in their local area is ‘good,’ on the global aggregate level. The local economic assessment down one point since last sounding.

The future outlook average loses one point, as one quarter (25%) of global citizens expect their local economy will be stronger six months from now.