Has the European project made Europe stronger or weaker today than it would have been without it?

Figures have been relatively stable since this question was first asked in 2017. Almost half of Europeans surveyed (47%) believe Europe has been made stronger by the European Union. Almost two in five (42%) say the same about their own country. Countries that have been EU members since its creation are less likely to express the view that it has strengthened Europe as a whole, whilst later joiners (Sweden, Hungary and Poland) are more positive. In terms of the EU’s direction, the proportion of Europeans that believe the European Union is heading in the wrong direction has continued to fall over the last three years, with 29% saying it is on the right track. Similar to the dichotomy above, majorities in Belgium, France and Italy believe that the European Union is heading in the wrong direction. 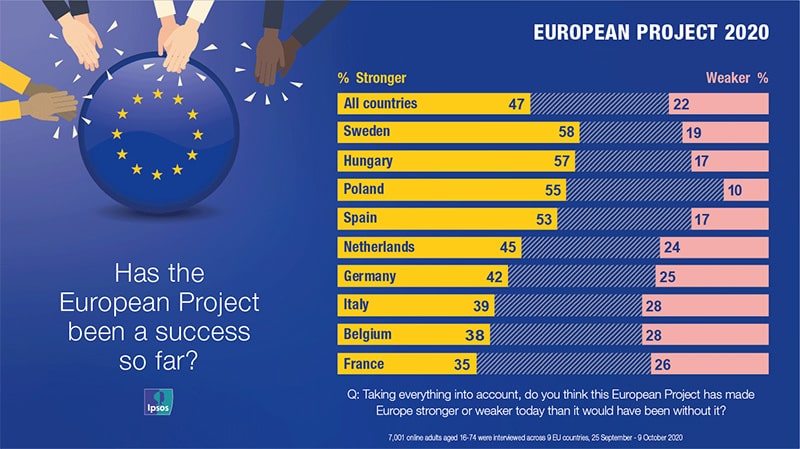 How can the European Union impact the world by acting together?

Has the European Union been able to make a difference in handling the Coronavirus?

A fifth (20%) of respondents say that the European Union has helped reduce the effects of the Coronavirus pandemic in their country, whilst just over one in four (27%) hold the opinion that it has helped manage the crisis. However, roughly two in five think the EU has either made no difference to the impact (44%) or not been involved enough (39%). The eastern European nations of Poland and Hungary are most positive about the EU’s response to the pandemic, whilst France, Sweden, the Netherlands and Belgium are the least impressed by the impact of the EU’s involvement during the pandemic. Italy, the first country in the EU to suffer a serious outbreak, has the highest proportion of those who believe the EU has made the effects worse, closely followed by France and Belgium.

This Global Advisor survey has been conducted in 9 EU Member States between 25 September and 9 October 2020. For the purpose of this survey, Ipsos interviewed a total of 7,500 adults aged 16-74. The sample consists of 1,000+ individuals in each of Belgium, France, Germany, Italy, Spain, and of c.500 individuals in Hungary, the Netherlands, Poland and Sweden. If interested results are also available for other countries including the UK.

Pan-European and international research is conducted to the highest standards of methodological rigour through our European Public Affairs (EPA) hub based in Belgium, which has a solid track record of successfully delivering large scale, multi-country solutions for a range of clients, from European and international institutions, through to NGOs and leading academic institutions.

Find out more about our solution