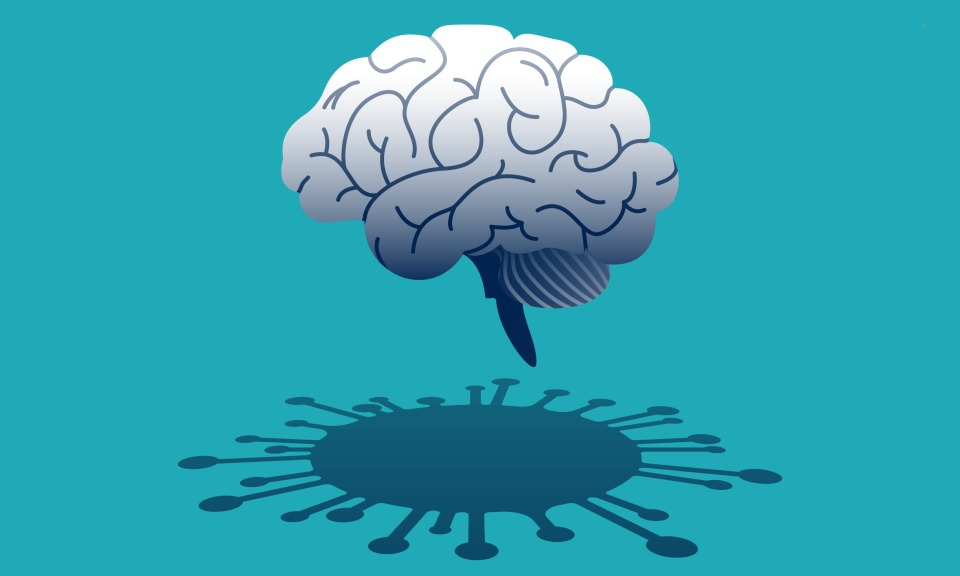 The road of life has always been filled with twists, potholes and bumps along the way.
But, it can feel like there are a few more roadblocks than usual these days.
These are, as Kieran O'Leary, Director of Public Affairs for Ipsos in Ireland, noted “very difficult times with a lot of concern in particular around cost of living.”
There’s also a lot of concern about climate change, the invasion of Ukraine, not to mention the ongoing COVID-19 pandemic.

Recent polling via Ipsos’ Global Advisor online platform, conducted between July 22 – August 5, finds those navigating early adulthood are finding it the hardest to cope.
Just over 2 in 5 (41%) people aged 34 and under, on average, across 34 countries said they felt stressed to the point where it had an impact on their daily life “several times” in the past year— that’s compared to 34% of those aged 35-49 and 26% among people aged 50-74.
Gen Zers and younger Millennials were also significantly more likely than older Millennials, Gen Xers and Baby-Boomers to report they’ve felt stressed/depressed and have seriously considered suicide/self-hurt “several times” from July 2021 – July 2022. 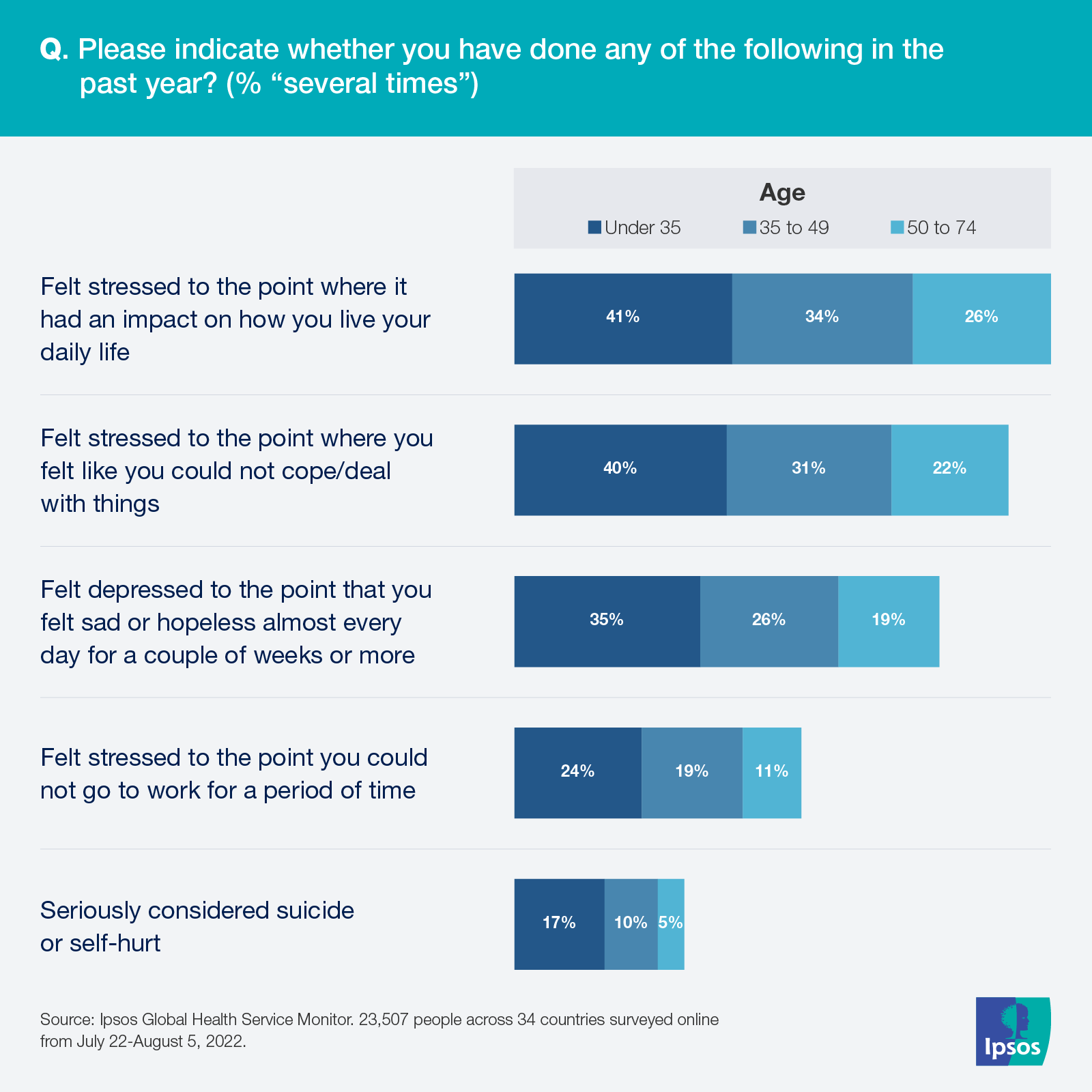 This doesn’t surprise Ricardo Salas Pardo, Public Affairs Director for Ipsos in Mexico. “Younger generations do not see talking about mental health as taboo the way it was with older generations, so they are more open to recognizing they’re struggling.”

Alongside this generational shift things are also changing in some countries, including in Ireland.
“There has been a broader conversation around mental health in recent years and wider acceptance of the issues surrounding it,” said O'Leary. The Irish government is also putting concerted effort into improving mental health services and reducing stigma, he added.
This isn’t the case everywhere.
In Mexico, the “government has placed no importance at all in communications on mental health,” said Salas Pardo, and added “for years government communication on health has been heavily focused on obesity.”
In Japan, the main focus is also elsewhere.
COVID-19 is still overwhelmingly considered the biggest health concern facing people today in Japan among 73% of respondents there, compared to 47% of people, on average, across 34 countries, according to the Ipsos Global Health Monitor 2022.

Many Japanese people are still social distancing and wearing masks, said Shun-ichi Uchida, Country Manager for Ipsos in Japan. Plus, the “Japanese often say 'patience is a virtue' and this may make it difficult culture-wise to express stress or release it,” noted Uchida. 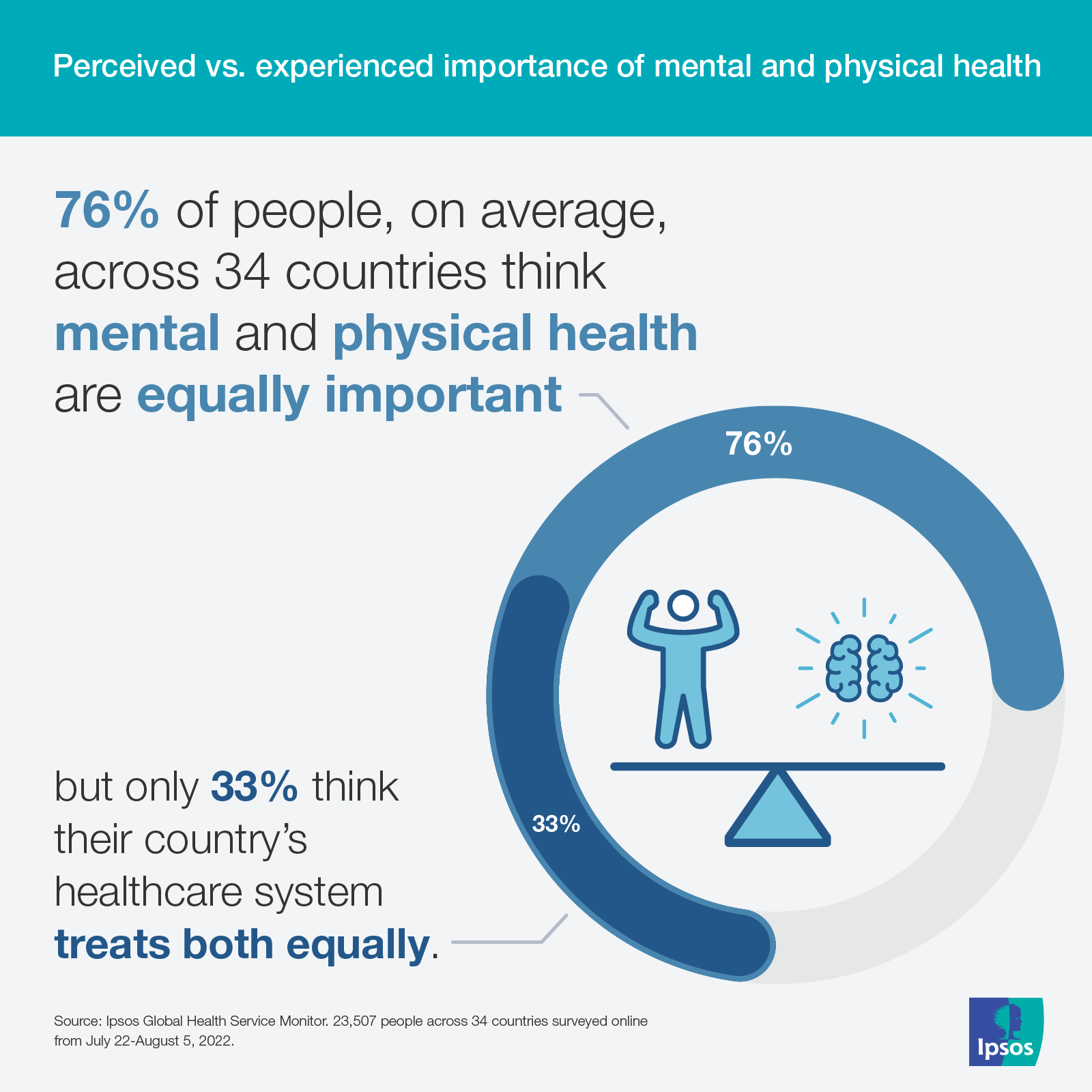 And in Ireland, only 21% think mental and physical health are treated equally by the system. “This is likely due to the generally negative perceptions that many people have about the healthcare system in Ireland,” said O’Leary. “It is seen as a system that is overstretched and struggling to deliver a range of services — mental health being one of them.”

Amid the obstacles people are facing when accessing care from stretched healthcare systems during the pandemic, many are leaning on friends and family, as well as getting professional help, for mental health challenges.
And younger people are the most likely to openly discuss their challenges.
Almost two in five (39%) of those aged 34 and under said they talked with friends/family about mental health issues/concerns in the past year, followed by those aged 35-49 at 31% and people aged 50-74 at 22%.
Younger generations are also more likely to tap the help of a professional.
One in four (20%) people aged 34 and under said they had talked with a counselor, psychologist or psychiatrist about their mental health at least once in the past year, that’s compared to 17% of those aged 35-49 and almost double the percentage of people aged 50-74 at a mere 11%.

The bad news?
There’s no clear end in sight to this “very difficult time” in history. And those coming of age during such seismic shifts will still have to go through what has always been a “stressful life stage” filled with answering big questions like what career path to pursue and whether to marry and have kids, noted Uchida.

The good news?
While life will remain filled with twists, potholes and bumps, the next generation are talking up and reaching out when things feel too hard to navigate alone.